Home Ideas Church Profiles Bringing in the Broken: Church by the Glades 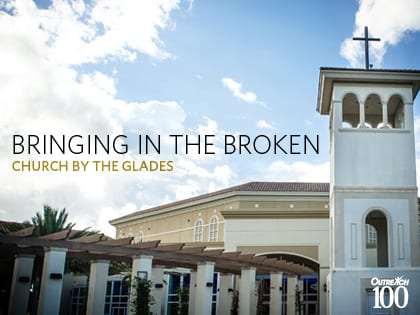 Church by the Glades “Can’t Afford to Play it Safe”

“I just find comfort knowing that I can walk into a church, and even if I sinned yesterday,” the 20-year-old says, “they will still accept me.”

The south Florida woman attended church only on holidays when her friend invited her to Church by the Glades in 2012. But Valdes kept returning to the Coral Springs, Fla., church, became a Christian there, and really likes its tagline. It may be the only church motto that seemingly restricts attendees: “No perfect people allowed.”

The church is where “the messed up, jacked up and shacked up” people of south Florida attend, Lead Pastor David Hughes says. They don’t refuse perfect people, but some “really religious” folks, uncomfortable with broken ones, leave anyway. The others keep coming back.

Church by the Glades was at one time wrecked with politics, church splits and “ugly, tumultuous board meetings,” according to Hughes. “It’s unbelievable what God’s done,” he says.

He attributes the growth since then to three main keys.

First, the church is obsessed with the Great Commission, according to Hughes, who says they will do pretty much anything for the opportunity to have people come to Christ. He refers to 1 Corinthians 9:22: “I have become all things to all people so that by all possible means I might save some.” He takes the “all possible means” part to heart.

One example was the eye-catching tagline: “World’s largest strip club: Come get naked with 5,000 of your closest friends without taking off your clothes”—that sermon series was about taking off the religious façade, the ready smile in the church parking lot after fighting on the way there—being real.

“I wrestled with God on that one,” Hughes says.

But he’s not drawing a church crowd. He’s in “target rich,” metropolitan Coral Springs outside of Miami, where he advises newly-located pastors there to take off their pastor hats and put on missionary hats. Put the gospel in their vernacular. Think like that person you want to reach. Know what they’re going to connect with.

“Sunday morning, no one is going to church, so you have to win people,” Hughes says.

The original church members knew they had to try something different. They willingly gave up their seats and parking spaces and attended church at 9:30 a.m. instead of the familiar 11 a.m. slot to make room for a contemporary service and younger crowd.

This unselfishness of the “traditional folks” is another main reason Church by the Glades grew, according to Hughes.

He didn’t just pat older members on the head and tell them what he was going to do. He loved, honored and respected them, and they can tell the difference, Hughes says. They trusted Hughes, and cared that people were saved—even if they thought parts of the contemporary service were crazy.

“That’s our big front door,” Hughes says of their weekend services, the third main prong of Church by the Glades’ growth. “It is a beautiful God-punch in the face,” he adds.

They launch a new sermon series every four to five weeks, and the first week is fun and over the top. Congregants know that, and are “always on the invite,” Hughes says. “We train them.”

Newcomers walk away from the service thinking, “Wow.”

From Outreach Magazine  A Heart of Service: 3Circle Church

“Ideally, it’s ‘Wow,’ and they want to give their lives to Christ,” Hughes says. But he’ll take, “Wow, I want to come back.”

Usually it takes three to four weeks for people there to cross the line of faith. Performances, dynamic guest speakers or their fall Halloween services—one of Church by the Glades’ biggest weekends—can get them to that fourth week.

Hughes himself grew up Baptist and stayed away from Halloween. But he is pastoring in south Florida where people think it’s fun to be scary, he says.

“I don’t like to be edgy, but you have to be pushing envelopes here to reach people,” he says. “It’s heaven or hell. We can’t afford to play it safe.”