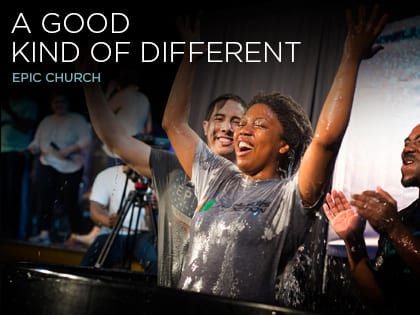 Courtney Grugeon remembers asking Jesus into her heart at age seven, while in the car with her mother, after hearing a children’s tape on salvation. “I grew up, as you can see, in a Christian home,” the Pennsylvania woman says.

Yet she fell away from the faith in her 20s. It’s not that she had a negative experience. “I just didn’t really find it completely relatable,” she says. And, her Christian peers seemed a little out of touch with reality.

She wanted to see people, whose lives she admired, living a Christian life that felt authentic. She found that community at Epic Church, which also proved to be a place where she could ask herself a difficult question: “Do I believe what I believe because I was raised that way, or because it’s personal to me?”

The latter, she found out. “Epic was kind of a support in the process of that journey,” Grugeon says.

Epic is a meet-them-where-they-are church. It uses humor, postcards and even creates its own holidays to grow and connect with locals in hopes of seeing them connect with Jesus.

Lead Pastor Kent Jacobs often mentions Philadelphia’s population of 1.5 million. He hopes “epic,” an acronym for “every person in the city,” acknowledges Jesus as the forgiver of their sin and leader of their life.

Epic’s young and diverse attendees—the average age is about 27, and the congregation is about 50 percent nonwhite, Jacobs says—regularly hear humor from the pulpit, creating a more welcoming environment.

“If something funny happens in my life, I’m probably going to bring it up,” Jacobs says. “It makes you relatable. It makes you go, ‘Oh, I get that guy. He’s just like me.’”

Humor paves common ground where truth can be built, he believes. Even Epic’s more solemn leaders script lighthearted material into their talks. “They’re intentional about their humor,” Jacobs says.

But they face a serious spiritual task. “Philly is a city of neighborhoods,” Jacobs says.

Multisites aren’t easy or cheap, but without a large enough venue—with enough parking—they “brought church to the people” at four locations instead of asking locals to trek far.

The postcards have “opened so many doors,” Jacobs says. Sometimes people visit when they need a church after keeping the card on their refrigerator for months, he says.

Or an “Epic Day” draws them. People fill churches for Easter and Christmas, but Epic leaders decided to also connect with people at “the front of the growth curve” when attendance increases in the fall and spring.

They hand out T-shirts or sunglasses, bring in a photo booth and celebrate Epic Day at the church in February and September.

Epic attendees habitually invite others anyway. They grab business card size invitations at church doors before they leave each week to help spread the word. But invites multiply and more visitors step inside for Epic Day. “We just create our own holiday, basically,” Jacobs says, laughing.

They’re a little different. But Philly didn’t need another church, according to Jacobs. He thinks it needed a different kind of church. He wants everyone to connect with Jesus no matter how much money or biblical knowledge they have.

It was the right kind of church for Grugeon. “Having gone to a lot of churches,” she says, “there is not a church like this one.”

From Outreach Magazine  Rule No. 1: Relationship Before Rules: Daystar Church