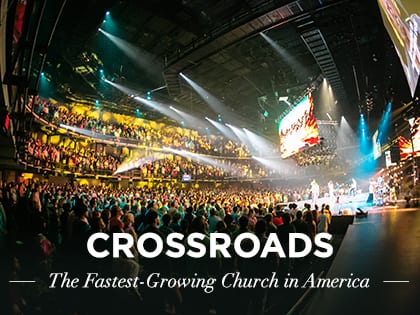 “God is at work in powerful ways through communities that are stripping away nonessentials and religiosity that bring confusion and even despair,” says Senior Pastor Brian Tome. “His ways still work, and we’re seeing him grow his church.

“We’re excited that God’s Word is still true: The harvest is great. Our American pop culture can’t give people true hope. It isn’t giving people timeless truth nor a peace that passes understanding. The message of grace and second chances is only found in the person of Jesus, and his primary delivery method is still the local church.

“We could feel beaten down as we notice we’re becoming aliens in a culture that seemingly wants nothing to do with God’s ways. Or, we can see that we’re actually offering a way to peace in a world that’s grinding people down to a nub.

“He’s also drawing together a diverse group of people who are acting as one. Race is a huge issue in our country. An initiative we started, called Undivided, is bringing white and nonwhite people together into small groups, listening to the stories of the people who look different than us and taking steps toward becoming one.

“The human pinch points are always the same: a God-sized vision, qualified godly leaders, financial scarcity and technology. We’re in the midst of a campaign, so the vision is crystal clear. People are rallying to a defined purpose. Money exists to build more sites along with a technological infrastructure that meets people where they are.

“Fifteen years ago, no one thought the masses would rather shop online than go to a store. And yet we do. Similarly, people are now drawn to expressions of the church that aren’t bound by traditional brick and mortar, and our campaign is enabling this to happen.

“We’re also experimenting with different forms of preaching and teaching. In 2018, we’ll have 20 weekends that are prefilmed in locations ranging from Israel to the mountains of Colorado. Communication has changed in our culture, and we have to enact a different delivery method for content that’s more than a 35-minute monologue by someone standing on a stage.

“The latest research shows that American consumers are also looking to pay for experiences, not products. Therefore, we are doubling down in tactile, immersive experiences. We recently purchased over 400 acres of land and have had thousands of people go off the grid for primal camping weekends in the woods (with no electricity and no plumbing) through men’s, women’s and couples’ camps. This has resulted in reaching people we never have before and growing our own people in ways beyond the norm.

“Another example is our Christmas Show called Awaited, which costs a lot of money and takes a lot of effort. Last year, 2016, was our 10th season of Awaited, and that year alone brought 110,000 people into our two largest campuses over the course of four weeks.

“We keep asking ourselves what new things can we try. The entrepreneurial God of the Bible wants us to take risks in reaching new people in new ways.”

Read about the No. 2 fastest-growing church »