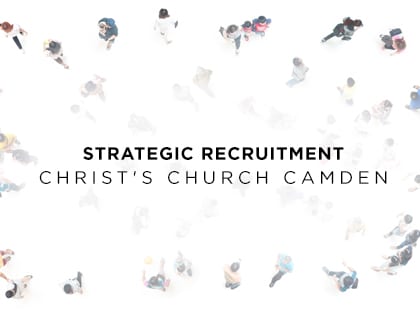 Can you share a little about the community at Christ’s Church?

Our biggest challenge and opportunity is military. We’re home to one of two nuclear submarine bases with the Navy. The challenge is they’re getting orders every two to four years. So, about twice a year, there’s a huge exit of people in our community, but then there’s also a huge influx. They ship people out but then they ship people back in, too. It gives us the opportunity for those who are young in their faith to plant that seed.

What’s most important during their time with you? How do you get them plugged in?

If someone has to choose between serving and getting in a small group, we want them to serve. They’ll build responsibility and relationships, and those are the two things that make your church the most sticky. They’re going to surround themselves with other Christians. And I think they’re just going to get a blessing from God for serving. It’s all with the goal that then at some point down the road they’ll see the value of small groups and get into one.

So how does Christ’s Church encourage people to serve?

We have a very strategic calendar. At our annual planning retreat, we plan out all 12 months of when we’re going to recruit for groups, and we put that on the calendar because that’s first and foremost to us. Then there’s a three-week period where we will recruit for each ministry team.

What ministries do you recruit for?

Children’s ministry and student ministry are the key ones you have to be strategic for when you recruit throughout the year—so there’s time for background checks and getting people trained up before the school year. We also do our barista team; guest services—greeters parking team, ushers; green team and clean team—building, grounds, maintenance; production—creative arts, worship team; and admin.

In addition to meeting a need for volunteers, what does this form of recruitment do for the ministries?

It gives us the ability to appreciate that ministry, and it also casts vision. We show the video about children’s ministry: “Here’s how many kids come and here’s how many volunteers we got right now. And here’s what they’re doing. They’re introducing your children to Jesus every single week,” and so on and so forth. It casts vision and that leads right into generosity and giving. It has multiple upsides for us.

How successful have you been in getting the volunteers you need?

We average about 43 percent of our adults serving each Sunday. About four years ago, I was challenged by Nelson Searcy’s pastor-coaching—don’t start managing until you start measuring. We had no clue where we were at as far as the percentage of volunteers on a weekly basis, so we started measuring, and we were right at 18 percent. Since then, we’ve been measuring every single week. We haven’t hit our goal—50 percent—but we’re close.

6 Tips to Plan a Memorable Summer With Your Kids