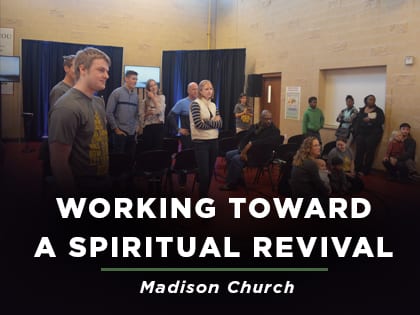 “It became apparent that the most missional thing we could do in Madison was start a community-centric church.”

For our From the Front Lines series, we asked several pastors to share the stories of their church plants. But this is just the beginning of their stories. These pastors will be checking in online with regular updates on their churches and experiences, allowing readers a front-row seat to the ins and outs of church planting. Read more from Stephen Feith and Madison Church »

The voice of God calling me to plant a church sounded like my roommate shrugging off another conversation. I spent a lot afternoons in our dorm room complaining how it seemed common for pastors and their churches to focus on problems and people from another time. Meanwhile, our generation, which is interested in spirituality, would have to leave our culture at the doors of sanctuaries to find God. “Start a church,” he said, leaning in closer to his computer screen. God called me to church planting with those words, and they have filled my head with dreams ever since.

My wife, Megan, and I had an opportunity to move anywhere we wanted after graduating, but decided to stay in the Midwest and live in a predominately young, urban community with little or no existing church presence. Our search criteria brought us to Madison, Wisconsin. We fell in love with the city on our first visit, and knew that God wanted us in Madison to pioneer the kind of church the community could engage with. Even though relocating would not happen for another year, we started making plans and preparing.

A part-time job at a grocery store provided flexible scheduling, allowing me time throughout the week to do church-related work and weekends off to do fundraising. Megan and I used our paychecks for all of the expenses as we drove our car around the region, sharing the vision and asking churches to invest in it. Many of these churches were generous, but it was donations from friends and family who believed in the dream that made us successful in reaching our fundraising goals.

I felt prompted to move, but Megan had to finish out a contract with her employer. Since she could not leave and we were unable to afford two places to live, and I had not secured a job yet, I moved to Madison unemployed and homeless. Although it would not be for long, everything I took with me to Madison was either in the backpack I wore or the duffle bag I held. It was the first of many challenging decisions I would have to make trying to be obedient to God’s will.

I did not know anyone in Madison or have a church-planting team around me. The first interest meeting took place at a coffee shop with a guy I had just met. From that first meeting and more meetings like it, we began hosting barbecues over the summer at our apartment. Everyone brought food and drinks to share while we discussed God, the Bible, Jesus and spirituality. There was a lot of energy around what we were doing, and I decided that it was time to have monthly preview services during our first fall in Madison.

The excitement to go public with a new church quickly turned into disappointment. Everything that could go wrong on launch day did. I was taking it hard, and I feared I pushed us too hard, too fast. A couple days later, I met with a pastor of a church that had been trying to establish a campus a mile away from where we were. They met in a community center with onsite storage and a cheaper rent per month than what we were paying per week. He offered the lease with building-specific supplies and materials if we would take over operations.

Walking through our new space energized my faith. The next weekend we doubled the amount of people who visited our new church. I did not plan or prepare for the affordable community center space, but God did. He provided the most ideal building for our new church to meet in and made it available to us. It surprised me, but over the course of planting, God has surprised me through what has come our way and who has joined us along the way.

Most of the people I have encountered in Madison are isolated and lonely. They are young adults who relocated here for a job or college; many of them not knowing how to develop healthy relationships. It became apparent that the most missional thing we could do in Madison was start a community-centric church, a place to know and be known. Our mission at Madison Church is connecting people with God and each other because we are determined to help people grow spiritually and build relationships. This has guided all of our methods and models.

But people almost always like the idea of relationships better than they like actual relationships. The rest of our first year was challenging, as community engagement at our weekend gatherings and small groups became inconsistent. This affected our finances, too, and I began losing sleep worrying about whether or not we would survive the summer. I risked everything and started a second service going into summer with the hope of reaching more people.

The move doubled the cost of rent and the amount of volunteers needed, but it served as a catalyst into a season of growth and expansion we are still benefitting from. Over that summer, we saw our evening gatherings become more popular than our mornings. Last fall, we celebrated Madison Church’s first birthday and gained key members. A month later, we baptized many of our new regulars. On Easter, we dedicated families, commissioned new small group leaders, and had our most-attended gathering to date. Though the journey ahead of us is long, there is a momentum within our faith community that is tangible.

God has faithfully rewarded each risk we have taken. I love what he is doing in Madison through us. I am honored that I get to be a part of it. Madison has never been a city influenced by the Gospel, but I believe God is working toward a spiritual revival here. Our vision at Madison Church is to have ten campuses by 2025 with a small group in each neighborhood. I want everyone in our community to be within walking distance of one of our church gatherings because we are committed to connecting all of Madison with God and each other.