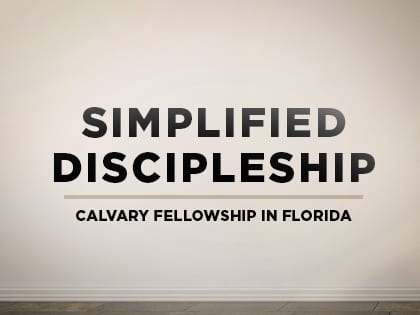 Our mission is to help people take their next step with God. Everything we do is within the context of asking, “What’s the next step?” As we think about that, in terms of someone attending for the first time or making a decision to follow Jesus, we ask, “What do they need to do? What do they have to do in the service to indicate that decision? What needs to happen the next day or that first week to help them solidify that decision?” It’s process-oriented. But really, the whole idea is: simple next steps.

Can you explain what you mean by simple?

I do a lot of coaching with new pastors and one of the things I ask is, “What are you doing for new believers?” They say, “Oh, we have this small group. It’s at somebody’s house.” So, let’s just say you have an auditorium that seats 500 people. Someone goes from an auditorium with 500 people and you want their next step to be driving to this small group house where they’ve never been with people they’ve never met? Maybe for a regular attendee that isn’t such a big ask, but for a new believer, that’s not a safe step. So, the challenge for us becomes: How do you help people take simple, logical next steps?

What are some of these steps at Calvary?

You’ve got to have one thing that you’re asking them to do. A lot of churches offer too many choices. It stuns people. There have been all kinds of studies in sales and marketing—you can’t give people more than three choices, anything more than that and sales volume goes down. For us, when they attend for the first time, the one thing we’re asking them to do is to come back. It’s that simple. My contention has always been that second-time guests are more important than first-time guests. People can show up at a church once for any reason—maybe they come because a friend is going to be soloist in the second song. They have no intention of coming back. But if that person comes back? Now there’s spiritual hunger. God’s doing something in that person’s life.

Then when they come back a second time, we’ve got our next opportunity to present the gospel and then say, “Hey, we’ve got these two things happening within the next couple of weeks.” If someone attends church two or three times and then goes to some other event—a movie night or class—that becomes the glue that helps them stick.

Can you share a story about someone taking simple steps and growing at Calvary?

A guy named George came to our church. His brother-in-law, who’s in our band, invited him. He was totally unchurched. He’s a studio musician—a drummer. Turns out all of our drummers weren’t able to make it, so, in a pinch, we said, “Hey man, could you play for us this weekend?” So he played drums. He was there for the service. Enjoyed it. Came back on his own volition. Then three or four weeks into it, he gave his life to the Lord, started growing, attended new believers class, started small groups and other classes. Soon he was playing in our worship band and eventually we hired him on staff to do some administration stuff. Today, he’s our worship pastor.

One of the things that gratifies me the most at Calvary is that story is just about every person on our staff. We have a staff of 20 or so, and 15 or 16 came to know Jesus in our church. They were baptized here, grew here. And that’s because we’ve been trying to be intentional about raising people within through discipleship—creating simple, logical steps to grow.

From Outreach Magazine  Watching Our Words