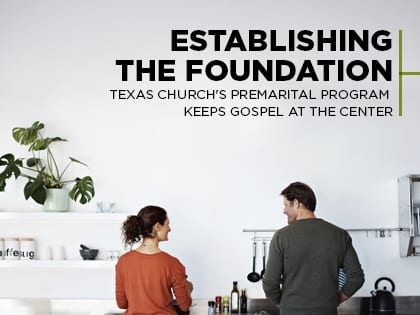 In 2007, Brian and Karen Riley stepped into The Austin Stone Community Church for the first time and asked, “How can we help?”

“They wanted to know what we had done at our former church, so we told them we were involved with premarital ministry,” says Brian. He and his family previously attended another church in Austin, Texas, but felt called to Austin Stone because of its abundance of young people. “As the Stone typically does, they said, ‘Run with it.’”

The couple began doing research, looking for best practices from churches around the country that had successfully and systematically prepared couples for marriage, while staying focused on Austin Stone’s DNA, which Brian describes as “gospel fluency.” They then developed a robust, 9-week program that aims to help couples “make much of Jesus” through marriage.

That was eight years ago, and today, at least 450 couples have gone through the program.

According to Brian, the average age of Austin Stone’s congregation is 28 or 29, and the city of Austin has similar age demographics, so there is a continual stream of engaged couples feeding into the program.

One of the most crucial components of any premarital ministry is the team of mentor couples, Brian says, which means he and Karen are constantly recruiting. Brian, who works as a recruiter for an executive search firm that he started, has a knack for seeing potential. He looks for mentor couples who are enthusiastic about the gospel, vulnerable and willing to share their weaknesses, able to maintain confidentiality and ask good questions, knowledgeable about 20-something culture, and discerning.

“They don’t have to have a perfect marriage,” Brian says. “But they need to be able to share how Christ has been absolutely transformational in their relationship.”

Brian and Karen invite the recruited mentor couples to their house for a series of four training meetings, where they go over the curriculum material step-by-step, covering two or three weeks’ worth of material at a time. There are currently more than 50 mentor couples who serve in the ministry on a rotating basis.

Soon-to-be-married couples express their interest in the program by completing an online, 13-page questionnaire that digs deep into some of the potential issues of marriage, including detailed questions about spirituality, in-laws, sex and personal weaknesses. Once a couple submits the questionnaire, they are matched with an available mentor couple.

The mentor couple invites the mentees to their house for an initial meet-and-greet, called “session 0,” in which the couples have a chance to become acquainted before diving into the curriculum the following week.

Between each session, couples are expected to complete around five hours of homework, which consists of reading books, listening to sermons and writing in their curriculum notebooks. During the sessions, couples watch sermons from Austin Stone pastors and others who fit the DNA of the church, answer questions and discuss relevant marital issues with their mentor couples. Each session focuses on a specific area of marriage.

In session 2, which Brian considers the most important session of the program, couples discuss the purpose of marriage. While contemporary culture teaches that marriage is all about an individual’s needs being met, Brian and his team want their soon-to-be-married couples to understand that marriage is actually about demonstrating Christ’s sacrificial love.

“That becomes your purpose in marriage, to display that same love and die to self for your bride,” Brian says. “It has nothing to do with what I get out of marriage, but what I can give in marriage for my spouse.”

This idea, that Christ and the gospel must be at the center of any Christian marriage, is the foundation for the entire program, and every session that follows draws from it.

From Outreach Magazine  Profile: United in Faith and Grace

One other significant element of the program is called “full-disclosure night.” At the end of session 3, which deals with communication and conflict, couples are given a challenge: Before the next session, they must find a private place where they can fully disclose everything about their past to one another. Brian says this is scary for a lot of couples, but it’s a necessary step in understanding forgiveness.

“They have to risk something,” Brian says. “But in risking something, they grasp the love of Jesus more. That’s our whole goal in doing this, to have them experience the gospel in a way they haven’t before.”

Although Brian and his team have not been able to keep up with every couple that has gone through the program, Brian says he can’t think of any instances of divorce. In fact, several of the couples who were mentored in the early years of the program have now become mentor couples themselves.

“God refreshes us every time a couple comes in,” Brian says. “When I get to proclaim Jesus in my living room and proclaim the gospel to a couple, in reality I’m actually gospeling myself and gospeling my wife. The words that I’m speaking come right back and remind me of what Christ has done.”