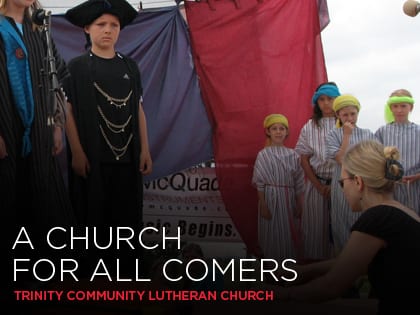 A Tiny, Isolated Church on the Canada Border Becomes the Heart of Its Community

An out-of-town visitor from the U.S. might have a better chance of attending services at Trinity Community Lutheran Church in Point Roberts, Wash., if they charter a plane or boat than if they drive.

That’s because the remote, small town isn’t exactly easy to get to.

If you can’t come by private plane or boat, you must grab your passport and enter British Columbia, Canada, from Blaine, Wash. Then drive about 20 miles west around Boundary Bay, cross the border once more and re-enter the U.S. Welcome to Point Roberts, and to the only church in the entire town, Trinity Lutheran.

The town’s unusual location means that approximately 1,100 residents live there year-round. (The summer population swells to 3,000 to 6,000.)

“It’s like a lot of little towns,” says Barbara Wayland, the church manager. “If something happens, people band together and do something. The church is active in the community, but the call for us to do things is a little bit different because we’re so isolated.”

Point Roberts is basically a retirement community, she explains, with few of the problems you might see in a more demographically diverse town.

The church did found a food pantry years ago, which it still supports with grocery donations. But it’s developed other ways to integrate itself into this community of Americans and Canadians.

Several organizations, including a quilting group and a community choir, meet there. It’s also a designated area disaster shelter. Trinity hosts a popular year-round concert series. And the larger community has proven it values the church’s presence.

About 15 years ago, “the church had gotten to the point where it really needed a social hall,” Wayland says, “and much of the money that built it came from non-members who felt strongly that a community needed a church, that anybody could want to have a wedding or a funeral or need a place to have a reception or meeting.”

From Outreach Magazine  The Challenges Facing the Western Church Today

Perhaps one of the church’s most-loved community projects is an annual children’s summer music camp, when children arrive with families on vacation.

“We put on a children’s musical using stories from the Old Testament,” Wayland says. “Most kids grow up hearing about Noah’s ark, so we don’t run into the issue of a family not being Christian.”

In fact, the church’s inclusivity is one of the best ways it serves its neighbors. Without a full-time Lutheran pastor in town, a handful of supply pastors, including a retired Episcopal priest, fill in.

“Very few people who come to our church are Lutheran,” says Wayland, who traces the church’s Lutheran roots back to its Icelandic founders. “They just happen to go to a Lutheran church because it’s the community’s church.”

Worshipers include Baptists, Roman Catholics, Anglicans, and even a Jewish woman.

That Episcopal priest, Father Chuck Cannon, says he even polled the congregation one Reformation Sunday to ask how many were actually Lutheran. Just five were.

But, he says of leading such a diverse crowd, “I like that very much.”

It’s reflective of the way Wayland sees the church: as the heart of this little community.