Home Features Why Hybrid Church Is Here to Stay 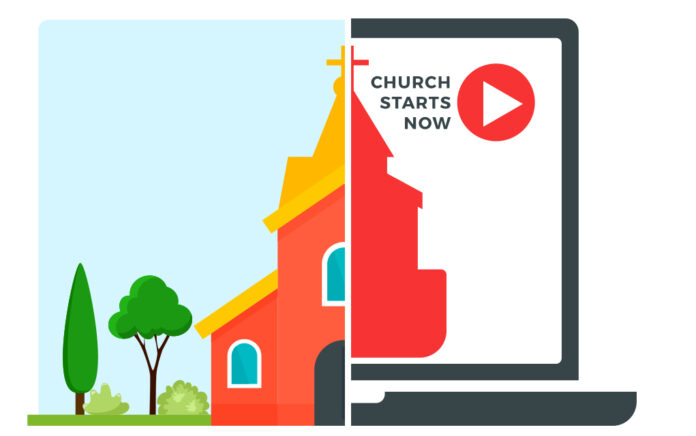 Churches have been experiencing declining attendance for some time. What the pandemic did was accelerate and widen the effect of two seismic cultural changes that hold enormous import for the life and mission of the church.

According to a recent poll, many Americans “don’t expect to rely on the digital services that became commonplace during the pandemic” after all things COVID-19 subside. Around half of U.S. adults say that they are not likely to continue doing such things as attending virtual activities, having their groceries delivered or using curbside pickup.

Yet according to the poll from the Associated Press-NORC Center for Public Affairs Research, close to half say it would be a good thing “if virtual options for healthcare, community events and activities like fitness classes or religious services continue after the pandemic.”

People have come to expect, and want, a hybrid world. Not entirely online, but not entirely physical: hybrid.

“Rather than this either-or, I think we’re more likely to be facing a hybrid future,” said Donna Hoffman, director of the Center for the Connected Consumer at the George Washington School of Business. “People have found convenience in some of these virtual options that just makes sense, and they don’t necessarily have anything to do with like keeping you safe or the pandemic even though they came of age during the pandemic.”

If any institution needs to grasp this new model, it is the Church. The Church must bring together the physical and the digital and think through such things as services, community, evangelism and discipleship accordingly. The future of the Church is that it will be, and must be, hybrid.

My fear is that it will not.

I can’t begin to tell you how many pastors and church leaders I heard express that the key to everything being well again was going to be the ability to start meeting again. Going further, they said they hoped they would never hear “Facebook streaming” again for the rest of their lives.

But then came the seismic shock: people didn’t return in droves. The “new normal” was not the “old normal.” The reason had little to do with the pandemic, which only provided the smokescreen. Churches have been experiencing declining attendance for some time. What the pandemic did was accelerate and widen the effect of two seismic cultural changes that hold enormous import for the life and mission of the church: the new reality of a post-Christian world and the digital revolution.

From Outreach Magazine  Your Pastor Is Broken (And That's OK)

This is why much of the focus of this year’s Church and Culture Conference is on all things hybrid, including such topics as:

In his book Think Again, Adam Grant writes of three prevailing mindsets: that of the preacher, the prosecutor and the politician. With each we take on a particular identity and use a distinct set of tools. If our personal, closely held beliefs are challenged, we go into preacher mode and deliver “sermons” to protect or promote our beliefs. If we recognize flaws in another person’s reasoning, we go into prosecutor mode and marshal arguments to prove them wrong and make our case. If the goal is to win over an audience, we go into politician mode and campaign and lobby for approval. “The risk,” writes Grant, “is that we become so wrapped up in preaching that we’re right, prosecuting others who are wrong, and politicking for support that we don’t bother to rethink our own views.”

Grant argues for a fourth mindset—that of the scientist. “If you’re a scientist by trade, rethinking is fundamental to your profession. You’re paid to be constantly aware of the limits of your understanding. You’re expected to doubt what you know, be curious about what you don’t know, and update your views based on new data.” But being a scientist, Grant points out, is not just a profession. It’s a frame of mind. It is a “mode of thinking that differs from preaching, prosecuting, and politicking.”

From Outreach Magazine  What It Means to Be Salt and Light

I hope that Grant’s use of “preaching” in a semi-pejorative way, and his highlighting of a “scientist” in a favorable way, doesn’t figure so literally in your mind that you want to defend the role of sermons and lambast the secular scientific mind and thus fail to get his larger point. He’s trying to make the case for necessary rethinking that can too often be thwarted because of resistant mindsets. For example, he lists the four most annoying things people say instead of rethinking:

“That will never work here.”

“That’s not what my experience has shown.”

“That’s too complicated; let’s not overthink it.”

If you have ever caught yourself saying any of those sentences, or even thinking them, you need to purposefully engage in rethinking—particularly in relation to a hybrid model of church. We simply must rethink the Church’s approach to fulfilling its mission in light of a post-Christian, digital age.

The heart of that rethinking hinges on a single word:

Adam Grant, Think Again: The Power of Knowing What You Don’t Know.