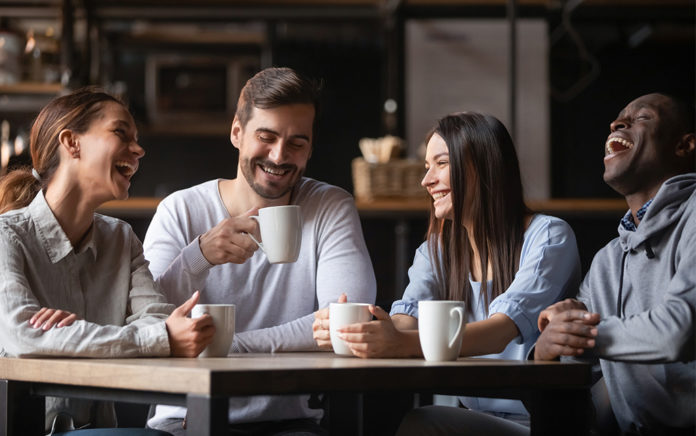 How Citylight Church in Omaha has created an environment where small groups have exploded.

This post was written by Dillon Smith, a Gen-Z team member at CareyNieuwhof.com who lives in Omaha, Nebraska. We’re so grateful to the Citylight team for making the time to share what they’re learning with us.

I’ve always had a hard time with small groups as a church leader.

In my experience, whenever a church launches a new wave of small groups, you’re really hoping to just keep most of the people that show up on week one through week 10.

Usually, you launch with groups of 20 and are happy if you have groups of eight by the end of the semester.

As a result of this, I’ve grown a bit cynical about small group ministries. I’ve even had the thought, Maybe small groups are just a bad idea. We could put people in serve groups instead.

And I almost gave in to that thinking. But there was one problem with my theory:

To help you understand my struggle with groups, let me share my experience with Citylight. They’re a church here in Omaha that I’ve never regularly attended, but have watched grow from the outside.

Since they launched nine years ago, they’ve grown from a small group praying in a living room into a family of 13 churches, have thousands of weekly attendees, and are reaching a huge number of young people.

As a Gen-Z outsider who asks a lot of questions, I’ve noticed a constant flow of everyday young Christians telling me how much they love their City Groups, and have heard a lot stories of people I know coming to Jesus in City Groups.

As a result, I’ve had to ask, In a time where most churches are losing people (especially young adults) to atheism, agnosticism, or just being a ‘none,’ how is Citylight having so much success?

I went in and asked their team some deeper questions.

First, Some Things They Don’t Do:

To deter some objections I know I’ll get in the comments about megachurches, I want to start with some things Citylight doesn’t do.

• Put on a flashy show every weekend. Citylight actually has much more of an acoustic, chill vibe that could be replicated by a church with almost any budget and some high-quality musicians.

• Water down the gospel to attract more people. In my experience of talking with various Citylight members and staff over the last eight years, I’d say they’re more intense than most churches on doctrine and theology.

A couple of their volunteers were actually the first people who explained to me what a Calvinist/Arminian or a TULIP was, and I wasn’t even attending.

• Grow exclusively from transfer growth. As far as I can tell, they have a similar amount of transfer growth as the average growing church here in the City.

And I would add this: A lot of the transfer growth I have seen to Citylight has resulted in those Christians becoming much more engaged and healthy followers of Jesus.

That’s a win in my mind.

Not all transfer growth is bad. Sometimes it’s a good thing when a toxic church loses some of its members to a healthier church.

SO, WHY ARE THEY THRIVING, GROWING, AND ACTUALLY MAKING DISCIPLES?

Obviously, they have great preaching, great culture, a rock-star team, real devotion to serving Jesus, and full acknowledgment that God is the one that deserves the glory for their growth.

Those have become the price of admission to being a growing church.

But, the final 20% that sets them apart is how their missional City Groups have been prioritized and organized since they launched.

So what sets the City Group model apart?

After interviewing their team, I see six things that make City Groups succeed and grow, when most small group ministries are fighting an uphill battle:

At the end of this article, I outline four more non-small-group-related principles that your church can use to reach more people.

From Outreach Magazine  How to Think About Difficult People

1. It’s Not Just a Bible Study. Each City Group Is Driven by Their Own Mission.

When you and I think of a small group, we think of a group of people coming together in community to do a Bible study in one of the member’s house or at a local coffee shop.

In this model, we usually stop at community and learning.

When a City Group comes together, they will decide their own mission.

Some examples they shared with me were:

• If they are near a college, they’ll make it their mission to reach, disciple, and meet the needs of students at that university.

In a City Group, the group isn’t the mission, their mission field is. And while most small groups focus on knowledge and friendship, City Groups go beyond and focus on mission and discipleship. (Are you starting to notice some similarities with the early church yet?)

So is the “let’s have a fun bible study” model of small groups.

2. The Standard for Being a Group Leader Is Extremely High

So many churches and student ministries struggle with finding enough leaders for small groups. I’ve been there.

I was shocked to hear just how selective Citylight is when they are selecting group leaders.

As far as I can tell it isn’t any easier than a job interview you’d have anywhere else.

They interview you, learn about your family and hunt down references in the searching process.

As a result of this, they don’t have a very high turnover rate for leaders, and are even able to tell what kind of people would be best to send to which group.

So here’s a thought:

If you wouldn’t hire them onto your staff, don’t let them lead a small group.

In our interview, the Citylight team told me about their 10-week-long City Group launch training that they take every City Group leader through.

In those 10 weeks, they resource their leaders with everything they will need to lead a missional community that multiplies disciples.

I couldn’t possibly outline everything that they cover in this post, but you can download their City Group Leadership Guide here to get a better idea.

They also have a City Group Resources page on their website that those leaders can return to again and again to stay sharp on things like:

• A clear guide on how to lead someone to Christ, share their testimony, and use the SOAP method.

• A guide outlining the difference between a huddle (two to three people focused on discipleship) and a city group (15 to 40 people who are living out the gospel where they live, work, and play).

This page is outstanding. If you get nothing else from this article, please check out this page (especially the discipleship resources.)

Another remarkable thing about City Groups is that they don’t want any group to have just one leader.

Their goal is that every City Group has a leadership team of individuals who share different portions of leadership.

Those different roles are: Up Leaders, In Leaders, and Out Leaders.

Here’s a screenshot from Page 8 of the City Groups manual that outlines what those positions are:

An incompetent or toxic leader can kill a small group if they’re the only leader. This framework ensures that doesn’t happen. 5. Develop (And Disciple) People Really Well

According to their site;

The Pathway is a one year plan to establish discipleship rhythms for a City Group to know, love, and worship Jesus in the context of spiritual formation, community, and mission.

This pathway gives every City Group a development path to follow to grow into a healthy, missional community that is multiplying disciples.

No small group accidentally gets more effective at reaching people over time. It takes a clear path to follow, and intentionality from the entire group. 6. Groups Have Been Just As Important As Sunday Services Since Launch Day

This might be the single biggest reason that City Groups are working so well.

When Citylight launched, they put just as much importance on being in a City Group as attending Sunday morning services.

City Groups weren’t an afterthought, they were a primary focus of the church since day one.

This is the opposite of what I’m seeing from most churches. Usually, small groups are secondary to Sunday morning.

But if you treat small groups as secondary, your people will do the same.

When it comes to small groups, you need to be all in or all out.

If you don’t disciple people well in groups, focus on doing discipleship another way.

While I have you, there are a few non-City Group related things that a lot of growing churches (Including Citylight) do that I’m really impressed with:

1. The Dual Lead Pastor Model Is Worth Considering.

I agree with what Kayle Stoecklein (whose husband Andrew died by suicide as a lead pastor) argued in her interview on Carey’s podcast, the job is just too big for one person to handle flawlessly.

I don’t think a Citylight church has ever been planted with only one lead pastor. They always have two lead pastors sharing the role.

I absolutely love this model.

You can hear a bit more about this in this ChurchPulse Weekly episode.

They exist to gather (on Sunday) and scatter (in Citygroups). Nothing else.

They outline this pretty well on their home page here.

There is also a great podcast with one of their lead pastors here.

Citylight doesn’t have any massive online presence like Elevation or Life.Church, but, there are two things that I see working really well for them online:

1. By prioritizing the development and discipleship of their people, they have created an army of individual Christians that are living out their Christian lives online.

So, rather than one big church online presence, they have thousands of individuals who are leveraging their online presence for the kingdom every day.

2. They have an outstanding website that does a fantastic job of enabling their City Groups to grow and develop.

I’ve talked about this a lot already, but the more I dig into their website, the more impressed I am.

What if your website was a place for equipping, and not just attracting people?

Carey and I have both talked about this a lot (here, here, and here, for example.)

If you want to lead anything successful:

Life.Church, Connexus, Citylight and Elevation are all examples of what happens when a church gets this right.