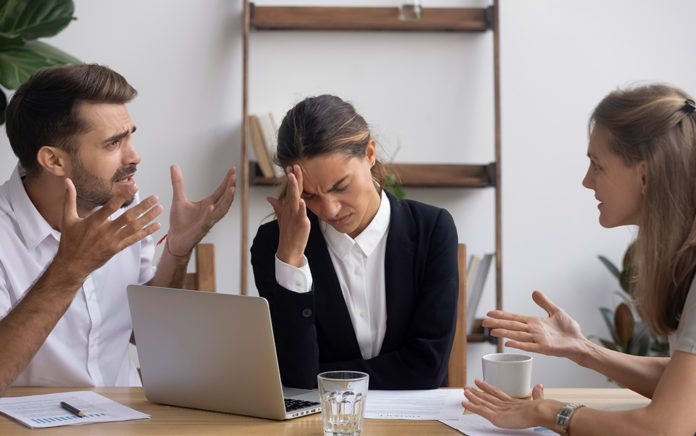 People have always been somewhat divided. But it’s never been this divided. And people have rarely been this angry.

If you think mask/anti-mask has been challenging, wait for vaccine/no-vaccine.

The future doesn’t show any signs of uniting people automatically. In fact, left unattended, the divisions will likely only grow deeper and wider.

One of the key tasks of leadership is to unite people around a common cause. That’s what leaders do.

That’s the role leaders play. And my guess is, deep down, you wish your church, organization or company was more united. And while leadership has always been hard, this particular moment makes it harder than ever.

So how do you do it?

Here are four principles that have helped me lead through division.

1. Start With the Core, Not the Crowd.

One of the challenges of leading in the 21st century is everyone makes their opinion known—usually publicly and loudly.

As you scroll through your social media feed, you see person after person you lead posting memes, links and opinions about what they think on any given issue. Your stomach sinks as you realize you’re trying to lead all of them in a common direction.

To make it more complicated, you have a bajillion inboxes and everyone can message you any time on social or via email to let you know exactly what they think. And they do.

You can’t even watch Netflix with the kids without someone urging you to do whatever they’re passionate about in the moment.

Most of us feel a pull to try to unite everybody. Maybe a great social post, talk or sermon will do it. Or writing a manifesto of some kind.

And of course as soon as you say it out loud you realize that’s not going to work.

It’s really difficult to bring about unity from the fringes or in the crowd.

Instead, rather than trying to unite the crowd, start by uniting your core. You hear from the fringe, but you lead from the core.

The core of any organization is usually quite small. For me as a leader, that’s usually been my senior staff and my board.

No matter how large (or small) your organization is, unity at the top has a way of filtering through the entire organization.

The good news is uniting your core—which is usually no more than 10–12 people, is remarkably easier than trying to unite the crowd.

Using the principles below on your key team will not only help unite them, but the people you lead will sense the unity of mission and purpose.

Think about it in family terms. You can break up a fight between the kids for a few minutes, but if you and your spouse are constantly arguing, it makes it hard to bring peace to the home.

When you’re in a good place as a couple—on the same page, united and you have each other’s backs—bringing peace in the family is so much easier.

Unity spreads. So does division.

So what about that crowd? You might have a united core, but what about everyone else?

Opponents fill your inbox and social media with angry messages, often writing in ALL CAPS because they’ve got it figured out (while you and the rest of the world don’t).

Those messages rattle me the same way they rattle you. I can get 100 kind messages and words of encouragement and one nasty message. For days, all I think about is the angry comment.

That’s why math is your best friend when it comes to navigating the future.

The opponents claim to speak for “everyone” and they’re louder than anyone.

Which naturally leads you and me into the trap too many leaders fall into: you mistake loud for large.

I’m not saying you don’t need to listen and learn, or that you’re always right and they’re always wrong. I am saying don’t let a minority of angry voices sabotage your future.

When it comes to change or charting the path forward, I am saying that generally speaking, human dynamics look something like this.

10% are opposed and loud (Opponents)

50% are quiet and neutral (Quiet Majority)

In other words, only 10% are typically opposed to the change you’re proposing.

Take the math a step further. Let’s say you have 100 people in your church or organization and you live in a small town of 10,000.

The angry opponents represent 10% of the people you lead, but they’re only .001% of the community you’re trying to reach.

Are you seriously going to let .001% of your community hold the future hostage? Are you going to sacrifice the 99.99% of people who will eventually embrace good change for the sake of the .001% who won’t? Didn’t think so.

If you’re thinking that your community is completely different and way more divided, I’ve written a lot more about leading change in the face of opposition here. Hope it helps!

3. Focus on What You Agree on.

A few further tips to deescalate the tension and build unity.

After all, there is so much that divides us right now. That stuff’s real. But … and don’t miss this … there are far more things that unite us.

To lead effectively in a time of division, focus on what unites the people you lead, not on what divides them

How do you do that? Well, start with some very basic things. At the core, we all have our common humanity.

We’re all people trying to do our best with fears, hopes, dreams, insecurities, needs and people we love. That’s a LOT of common ground.

You also have your mission. I find the more I rally my current team around our mission to help people thrive in life and leadership, the closer our team gets and the more effective we become.

For decades as a pastor in the church, I rallied people around what we agreed on about Jesus, and our common mission to lead people into a growing relationship with Jesus. That unites people who might typically not gather together under a very powerful core cause.

From Outreach Magazine  7 Insights to Make Your Sermon More Memorable

Want to break it down really simply? Instead of asking someone what they think about politics, ask them how their kids are—how they are, what they dream about, what they’re struggling with, what they need.

In good times and bad times, your job as a leader is to remind everyone why you’re doing this in the first place. Every day. Multiple times a day. Almost as often as you open your mouth or type into your phone.

I also realize the leadership can get so discouraging and functional that you need to remind yourself why.

Primarily, leadership consists of answering three questions: why, what and how.

What and how dominate unless you ensure they don’t.

That’s why why is your best friend.

Of the three main questions leaders deal with—why, what and how—only why unites.

How and what divide, while why unites (we’re all here to reach people).

The challenge is that when things are fractious, people always want to talk about what and how. Hence the endless debates about whether to open/reopen, masks, distancing, online, vaccines, etc.

That’s when the best thing you can do as a leader is pull the conversation back and elevate it to the level of mission.

• Let’s think for a few minutes about why we started the church.
• Everyone take a minute and pray for someone you know and care about that we’re trying to reach.
• One of the best things about this place is your deep commitment to Christ and reaching people.
• What’s one of the greatest things you hope God will do over these next few months?

In a business setting it sounds something like this:

• Let’s think for a few minutes about why we started this company.
• Everyone take a minute and think about something you believe our company could help.
• One of the best things about this place is your deep commitment to our values and mission.
• What’s one of the greatest things you hope we can do together over these next few months?

See the power of why?

A good rule is to talk about why twice as much as you do what and how. In a crisis, you may want to double or triple that ratio. Or 10x it.