Home Features 5 Tips When Conflict Develops on a Team 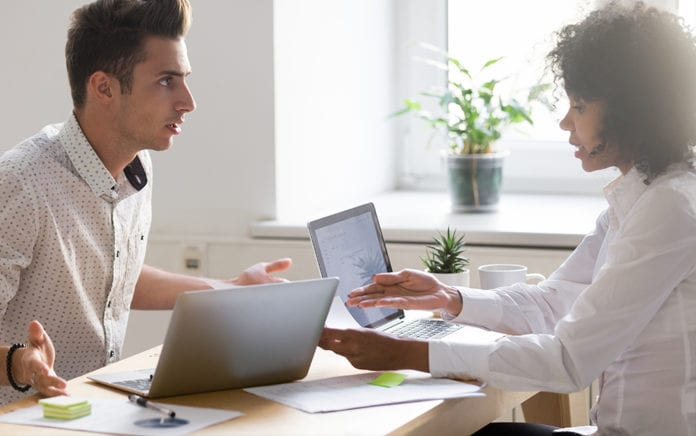 Advice for those times when a leader needs to step in to resolve team conflict.

As a leader, one of your primary roles is developing and maintaining the health of the team. What do you do when team members aren’t getting along with each other? How should you handle conflict on a team?

In my article 10 Tips for Handling Conflict, I primarily address team members individually working together to address conflict. The question I receive is: What happens when conflict escalates to the point where a leader’s input is needed?

First, I would say the leader being involved should be rare. Very rare. Most problems need to be handled individually. If it’s occurring frequently you may have the wrong people on the team or a bigger issue to address.

1. Don’t ignore. Conflict never goes away on it’s own. It usually only gets worse with time. In fact, conflict is a necessary aspect of a healthy team, so to avoid it keeps the team from discovering the best answers to issues and allows unhealthy tension to remain.

I like to give conflict some time to work itself out among team members, but not long enough to disrupt the team’s progress or jeopardize the health of the team.

When the team starts choosing team member’s sides of an issue and the conflict begins to be disruptive I know it’s time for me to address it as the leader.

2. Protect the vision. The vision of the organization or team should be the common ground for everyone on the team and it’s my role as leader to protect it. In times of conflict, I want to make sure everyone is still committed to that vision.

From Outreach Magazine  Brainstorm This: How to Measure Your Small Group Ministry

I realize that some conflict develops naturally, just because of differing goals, objectives, and personalities. The leader must balance the bigger picture objectives. (Read THIS POST for more on that subject.)

If the conflict involves a support of the vision or is disruptive to accomplishing the vision then addressing it becomes more serious. If the vision is fully supported, then conflict can be addressed among the individuals involved.

3. Talk it out. Once it is obvious issue is not resolving, as difficult as it may be, I like to bring the individuals in conflict together to discuss the matter of conflict.

Make sure the conflict is clearly identified. Often there were simple misunderstandings that need clarity or viewpoints that a team member feels the need to express. At this point, don’t make the mistake of being too nice as a leader. (Read THIS POST about that subject.)

Again, healthy teams and relationships involve healthy conflict and when it isn’t resolved or addressed it remains a stumbling block to the future health of the team.

For this step, I like all parties to be in the same room when the conflict is discussed. Addressing an issue separately opens the door for misunderstandings and choosing sides and many times the discussion brings communication to the issue which helps solve the conflict.

4. Establish mutual respect. Sometimes team members have to agree to disagree if it’s not a disagreement at the vision level. The leader, at times, may have to serve as a third party mediator and should remain neutral in issues of conflict in order to maintain organizational health and keep the organization on track towards attaining it’s vision.

The bottom line for me is that team members in conflict must be willing to respect each other and continue to work together, even if there isn’t complete agreement on an issue.

Ask the question, “Can we move forward without this affecting the team?”

5. Move forward. After the issue has been addressed, the vision is secure, and mutual respect is established among team members, the leader needs to make sure the team moves forward from the conflict.

There are times, especially in key leadership roles, where people can’t push past an issue and continue to work together, but most of the time conflict can make the team better. As team members learn to work together towards a common vision in spite of disagreements the entire team is improved.