Home Features How U.K. Churches Are Networking to Reach Their Nation 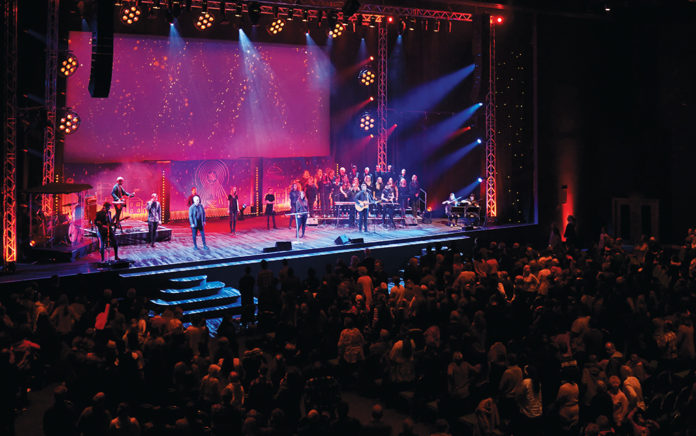 Imagine the British Isles living in darkness. Not a light in all of London. Or Birmingham, Manchester, Glasgow, Liverpool, Sheffield or Edinburgh. All 72 million of the nation’s inhabitants desperately need light.

Dave Smith’s vision of his country began with that image and continued as bright lights suddenly started popping on. One here, another there, in this city and in that city. So many lights activated that the bright spots began melding together, forming one giant beacon.

What did it mean? “As the lights began connecting with each other,” Smith recalls, “I knew God was reaffirming his call for the United Kingdom to come back to God. I sensed it was a call to the nation as a whole, for churches to work together to experience revival. I saw that our church would have a role to play in helping churches across our country—and beyond—grow to the next level.”

‘THINK BIG OR YOU’LL LIMIT ME’

Smith started with little going for a vision this size. Back in 1988, he and his wife, Karen, had left Oxford, where he had been completing a doctoral thesis on evangelist George Whitefield. They moved to Peterborough, an industrial town that barely made it onto the list of the nation’s 50 largest cities.

But they came with a God-given mandate to build a local church that would impact the city, the region, the nation and beyond.

“You could call Peterborough a strongly unchurched city. If there is a Bible belt in England, it’s not here,” Smith says with a smile.

The couple opened their home for a Bible study, starting with nine people. After growing to 15, it shrank down to six.

“The word God gave me at that point was ‘Think big or you’ll limit me,’” Smith says. God gave him a heart to see God’s kingdom come in the United Kingdom and in Europe as well. “He gave me a great desire for revival, for a church founded on the Word, one of biblical orthodoxy that welcomes the work of the Holy Spirit.”

Smith prayerfully mulled over the “think big” message and reflected on the story of Abraham’s faith in Romans 4, recalling that God gave Abraham a calling even before Sarah was pregnant. “Against all hope, Abraham in hope believed and so became the father of many nations” (Rom. 4:18).

From Outreach Magazine  10 Statements That Get Church Leaders Into Trouble

Smith concluded that God had spoken, and it was his job to act upon it in faith. “Ultimately, this is God’s church,” Smith says. “He wants our church to grow more than we do. He wants to reveal his secrets to us. We need to learn stuff along the way, but from the start it was a faith journey, a partnership with the Holy Spirit.”

In the early days of what eventually became KingsGate Community Church, Smith says they “dug ditches in prayer, built a culture of prayer and learned how to fast and pray for spiritual breakthrough.” These emphases fueled their passion for the lost.

The church grew from a handful to many hundreds. Today, at its 31-year mark, the church has several thousand people who call the church home, with an average weekend attendance of around 1,900 to 2,000 at its Peterborough location, plus an additional combined 400 to 500 at its campuses (called “centres”) in Cambridge, Leicester and London.

In order to continue scaling to larger sizes, Smith and his team have had to learn about and build appropriate systems for outreach, discipleship and training lay leaders.

“We’ve learned from and contextualized these from other churches around the world, especially from the U.S.,” Smith says. “We’ve sought to marry an openness to the prophetic work of the Holy Spirit and the need for planning and effective systems. I believe healthy and growing healthy churches need both, especially if they’re going to be successful in evangelizing and discipling large numbers of new people.”

From Outreach Magazine  Why Churches Without Broken People Are Broken

KingsGate’s biggest impact has come through its desire to reproduce and multiply, not just in becoming multisite, but in networking with other like-minded churches. Called Learning Communities, these gatherings are not preaching conferences but a two-year facilitated process where leaders rub shoulders with each other, tackle practical problems together, exchange best practices and are accountable for implementing the decisions they make.

KingsGate is partnering with the Association of Related Churches (ARC) and Gateway Church in Dallas to gather some of the largest and most strategic churches for this program. The first gathering drew 50 churches; now they are hosting a second round with 67 churches. A third group will have more than 85 churches. Most of the U.K.’s highest-influence churches have participated, as well as a growing number of leading churches from across Europe.

“There’s a wonderful cumulative effect through our peer-level learning, but also a sense that God’s got an additional agenda as we connect together,” Smith says. “When culture is so rapidly moving away from biblical norms, we don’t have time to fuss with one another. I think there’s a growing sense across the United Kingdom that we need a fresh move of the Spirit of God.”

The No. 1 need they’ve identified is to help existing churches grow to the next level. “You need systems and structures, but at the end of the day, it’s the Lord who builds the house,” he says. “God anoints people, the breath in the body—if there’s no life and breath, we’re just going to be a load of dead bones.”