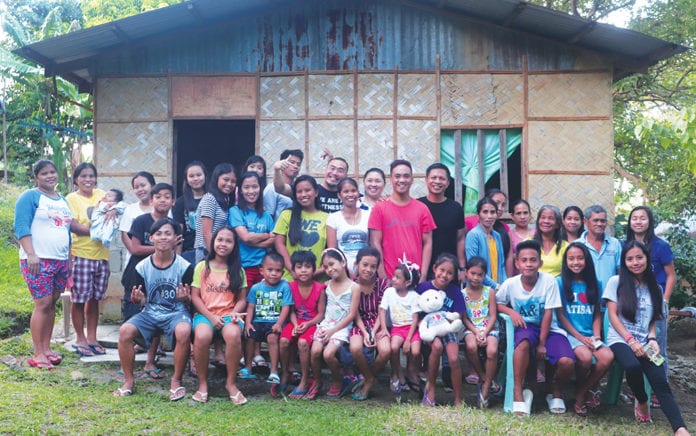 Making disciples who make disciples is at the heart of Frontline Worship Center in San Pablo City, Philippines.

The video clip, shot on a cell phone, is from the second-year anniversary of a church in a rural section of the Philippines. A 43-year-old man is the first to speak, giving his name, stating his role as campus pastor, and finishing with, “I am one, and I am making one.” Then we see both the pastor and the person he is discipling.

Next the pastor’s wife introduces herself, also saying, “I am one, and I am making one.” The shot widens to show another woman standing beside the pastor’s wife. Then the apprentice pastor repeats the statement and stands with someone he’s discipling. So do nine others, each stating their role—worship leader, youth leader, cell group leader, and more, from teens to seniors—and each introducing the “one” they are discipling.

In two short minutes, the video reveals that this church is all about relationships, people who understand that the core of discipleship and leadership development is to reproduce themselves through others. The video also represents the do-ability of a dream that can readily scale to biblical proportions: saturating every neighborhood across the Philippines with the gospel.

Church as a Training Center

“If every Christian can win just one person a year, and disciple that new believer to also become a disciple maker—a hero maker of others—we can reach the whole world,” says Max Beloso, evangelist, lead pastor and key trainer at Frontline Worship Center, a multisite network of active and growing churches.

Beloso, age 48, is based in San Pablo City in the province of Laguna. The city has a population of 250,000 people, but it’s surrounded by 83 different villages. Beloso has a vision to birth a nationwide network of vibrant, relevant, community-engaged and reproducing churches, all with a particular passion for rural areas where no churches exist.

“Many Filipinos are poor, not having money for transportation. It’s better for us to start a church in each of their villages,” he says. To that end, his focus for 2018 was to develop 21 teams, each with the goal to start a church in one of those rural villages. “By multiplying leaders, we don’t need a big building,” he says. “We can start churches without money.”

From Outreach Magazine  How to Approach Short-Term Trips in 2021

For many of the churches Beloso and his team have helped birth, the planter’s living room serves as church office, counseling suite and worship area. “All they need is a boom box and a guitar,” he comments. His pastors are farmers, delivery drivers and local merchants who continue their regular jobs while creating a house church in their home.

One campus It’s not about growing the church by just making new disciples, however. “We show them how to build their own network through multiplication,” he says. “Apprenticeship is very important. We cannot reproduce without being a hero maker.”

One campus started with 11 people and is now drawing 100 weekly. “As the house church grows, sometimes we use bamboo to build an extension to accommodate more,” Beloso says. “Other times we borrow a big hut like a local billiard hall.”

When a Church Is Full of Hero Makers

The “be one, make one” emphasis is leading to an abundance of trained workers, which in turn is enabling the church to meet many needs in Jesus’ name.

The Frontline Worship Center campus in San Ignacio is near the city dump. Many families at this location live on less than $2.10 a day. The church conducts feeding programs at the dump itself, feeding every day as many as 180–200 children whose parents earn their living by sifting through garbage for recyclable, salable materials. Here the power of God is changing not only individual lives but also the very community itself.

The original Frontline campus in San Pablo City has open doors at 11 universities, sending teams into these schools each week to teach on values. Every Wednesday church teams minister to teachers and students, acting as counselors and friends, sometimes even talking with parents as well. Jeff Pessina, the visionary who founded Philippine Frontline Ministries in 1987 says, “The invitation to these universities has been an amazing and huge door. To my knowledge, no other churches have ever been asked to do this or even allowed to do it.”

From Outreach Magazine  15 Ways to Rise Above Our Outrage Culture

With such positive publicity for Frontline, students who are already involved in the church have a much easier time inviting other students to visit. In the spirit of “be one, make one,” students are discipling other students.

All of this has led to explosive growth. Frontline—with all its campuses—is the fastest-growing church in the region. “What we’re learning is the importance of teams to plant churches,” Beloso summarizes. But even more, they’re learning that “every role in the church is reproducible, and if each person is constantly training someone else, then God’s church will grow beyond expectation.”

Read more about the global church at OutreachMagazine.com/Global.