Home Features What You Need to Know About Reaching the Nones 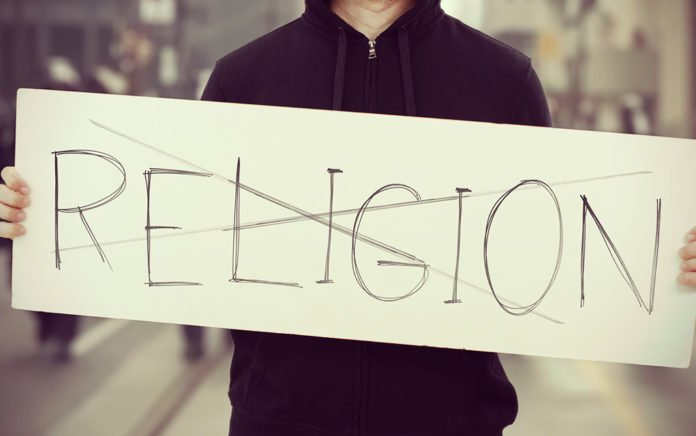 The group known as the “Nones” have fairly quickly become the predominant religious story in America. Nones—not to be confused with nuns—are the fastest growing religious group in America. The term refers to people who select “None of the above” when they’re asking a question on a religious questionnaire, they’re not necessarily atheists; in fact, most aren’t. They’re not necessarily anti-religious; some of them believe in God.

A more precise term would be the “religiously unaffiliated.” Depending upon which study you look at, as many as one-third of the Nones plan to go back to church one day. They’re generally not all anti-God, though some are.

• Nones are people who identify as religiously unaffiliated

As the charts below demonstrate, a smaller share of adults identify as Christian over the past several years, while the Nones have grown. 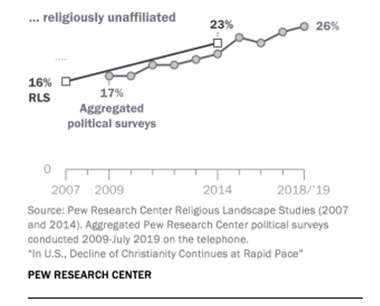 The religious landscape of the United States continues to change at a rapid clip. In Pew Research Center telephone surveys conducted in 2018 and 2019, 65% of American adults describe themselves as Christians when asked about their religion, down 12 percentage points over the past decade. Meanwhile, the religiously unaffiliated share of the population, consisting of people who describe their religious identity as atheist, agnostic or “nothing in particular,” now stands at 26%, up from 17% in 2009.

That’s a pretty staggering uptick in the numbers of religiously unaffiliated people. What do we make of this? I observed three takeaways in 2015 from the Pew report that brought significant attention to the Nones. In this article I want to make three points about understanding and reaching the Nones.

1. The United States Is Not the Whole World; the Gospel Is Thriving Globally.

It’s important we not jump on the “woe is me” wagon when looking at this phenomenon. Christianity is thriving globally in unprecedented ways. Here are important factors to observe:1

• The growth of the Nones is an American phenomenon
– Globally, religious affiliation is increasing not declining
– China and Africa show the most dramatic increase in religiosity

In other words, the rise of the numbers of Nones is an American phenomenon currently. We can be encouraged that across the globe, the gospel is going forth with strong impact.

2. Many of the Nones Are Open to the Gospel and Christian Friendships; This Offers the Church an Opportunity.

The Public Religion Research Institute (PRRI) noted how the religiously unaffiliated rose from 6% of the U.S. population in 1991 to 25% by 2016. The 2016 PRRI survey also identifies three subgroups of Nones:

• Makes up 58% of the unaffiliated

• “Religion is not personally important to them, but believe it generally is more socially helpful than harmful”

• “Religion is important to them personally”

• More likely to live in the South

In other words, we need not write off the Nones as unreachable. Creating spaces where the unaffiliated can express their doubts without judgment, demonstrating genuine care for people, and focusing on the gospel over current issues can help to build pathways to reach them. “The real mark of a None is not the rejection of God but the rejection of any specific religion,” James White notes in his book The Rise of the Nones: Understanding and Reaching the Religiously Unaffiliated.

It would be a mistake to dismiss 25% of the population as unreachable or act as though they were all atheists. It would also be a mistake to think church as usual will appeal to the Nones.

From Outreach Magazine  The One Church Strategy That Always Works

3. Biblical Christianity Remains Strong in the United States; the Sky Is Not Falling.

Since about the mid-90s we’ve seen about 1% of people a year identify as religiously unaffiliated. As churches are slowly moving back to gathering in services from the pandemic, many of the people who were loosely connected are nowhere to be found. I think we’re going to see that reality lurch forward.

That said, I am not an alarmist on the changing demographics. I have been waving the flag that Christianity in general, and evangelicals in particular, are not collapsing. Mainlines denominations tell another story, however.

The scholarly consensus now is that for the last 20 years that Christianity is not collapsing. I’ve sounded that truth in a number of places including the Washington Post and CNN. As Conrad Hackett of the Pew Forum observed regarding the rise of the unaffiliated:

“To some extent, this seems to be a phenomenon in which people with low levels of religious commitment are now more likely to identify as religiously unaffiliated, whereas in earlier decades such people would have identified as Christian, Jewish, or as part of some other religious group.”

For believers who stand with conviction on the Word, believe the gospel, and love God and people, we have this hope: the same God who redeemed each of us from the pit can do the same in others, regardless of where they are in their individual journey of faith.

1. James Emery White. The Rise of the Nones : Understanding and Reaching the Religiously Unaffiliated (2014). Grand Rapids.