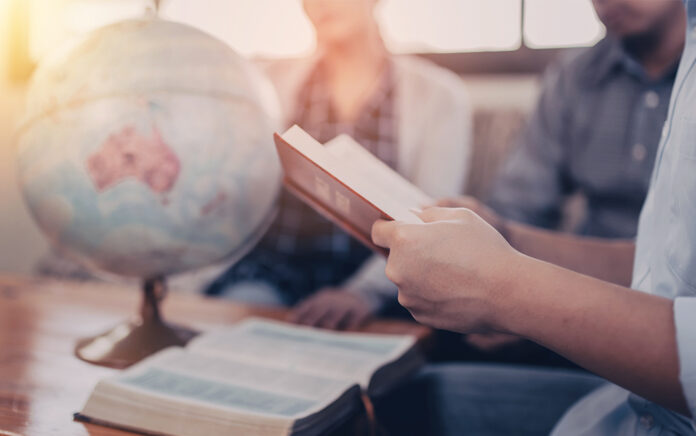 Why you don’t have to be an expert to share the gospel cross-culturally.

My husband and I had our first child just over a year ago. In that time—as all parents have experienced—I’ve made more mistakes than I can count. But one big mistake I made after bringing home our newborn was to start reading all the books, blogs and mommy forums I could find. Overwhelmed, I was desperate to figure out my baby—why she was crying, how to get her to sleep, how much she should eat—and I turned to “experts” for answers.

The problem was, none of these so-called experts knew my baby personally. So the only information I was getting was either highly generic or tailored for a specific baby—just not my baby. While there were some helpful guidelines that I implemented, I mostly felt frustrated that my baby didn’t fit the specific mold that all the books and articles said she should.

I had forgotten that my daughter is a human being, unique from all others. She has her own personality, preferences, eccentricities and rhythms. When I stopped trying to fit her into a box and started getting to know her, I stopped worrying as much about how the books said things “should” be and started doing what worked best for her. And we were both much better off.

The mistake I made after my daughter was born is similar to one I see a lot of people making when it comes to cross-cultural missions. It’s a mistake I’ve made myself. The thought of sharing the gospel with someone of a different culture and/or religion can be intimidating, so we think we need to do our research and become experts on other cultures and religions so we know how to share the gospel with them.

But, like reading parenting books, books about culture and religion can only give you so much information. Many of these resources contain generalized facts and give basic guidelines that may be helpful, but that don’t necessarily fit each individual person.

In Tradecraft: For the Church on Mission, Caleb Crider tells the story of a young church planter among a people group in North Africa. Upon finding out that this group was 99% Muslim, the church planter set out to learn as much as he could about the Qur’an and Islamic history, thinking it would help him relate to and build bridges with the people with whom he would be sharing the gospel.

But over time, as this church planter interacted with those around him, he realized that most of his new Muslim friends were only nominally Muslim. They didn’t know much at all about the Qur’an, Mohammad or Islam. He realized he was spending more time teaching them about their own beliefs than actually sharing the gospel with them.

From Outreach Magazine  Try This: Show Love and Support to Young New Moms

This is why it is important to focus on the people with whom you are actually sharing the gospel. You must know your actual audience—not just who the books say is your audience—in order to engage with them.

GET TO KNOW THE PERSON

The fact is, someone’s cultural traits and religious beliefs are not necessarily static. They are highly influenced by their family, peers, education, travel and many other experiences. As you converse and spend time with individuals, families or small groups of people, you will learn how to contextualize the gospel in a way that makes sense to them.

Our example comes straight from Jesus himself, and later, Paul.

The manner in which Jesus approached sharing his message with different people is an example for us to follow. While Jesus’ message was always the same, the way in which he shared it varied depending on his audience. He spoke differently to Nicodemus than he did to the Samaritan woman. And he spoke differently to the Samaritan woman than he did to Zacchaeus. In each situation, Jesus addressed the individual because he knew them and knew how to contextualize his message in a way that would speak most clearly to them.

Paul also shows us how to observe and get to know people in order to clearly share the gospel with them. We can find one of the best examples of this in Acts 17. Paul was in Athens and observed that the city was full of idols, specifically noticing an idol addressed to “the unknown god.” He used this as a launching point to share the gospel with his audience, starting with the fact that there is a God who can be known personally.

Jesus and Paul’s examples should help you feel the freedom to not know everything as you engage in cross-cultural missions. As you enter a new culture or begin sharing the gospel with someone of a different religion, observe and listen to them. Learn what they actually believe, not just what the books say they believe. You can build bridges to the gospel without having to be an expert on their culture or religion.

With this in mind, I want to encourage you with two things.

From Outreach Magazine  National Senior Send Off Livestream (May 28)

First, keep in mind that you also do not have to become an expert on the individual before you share the gospel with him or her. If we look back at Acts 17, we see that Paul was sharing the gospel continuously throughout his visit in Athens—even before he addressed the philosophers on their idol to an unknown god. He shared his faith as he continued getting to know the people around him. We can do the same.

Second, know that resources are not inherently bad. Don’t be tempted to fall into the opposite extreme and be completely ignorant of other cultures and religions either. When my daughter was born, I learned the sources I should listen to (like her doctor) and I learned how to glean helpful guidelines from the books I read without believing that every detail should apply perfectly to my baby.

The same is true for cross-cultural missions. It is good to learn about cultural norms. For example, you can have a basic understanding of how to dress—many cultures are much more conservative dressers (both female and male) than we are in America. You can learn what is considered offensive, such as exposing the bottom of your feet towards a person, which is a gesture considered rude in many cultures. You can learn what honor/shame or fear/power cultures are and how that plays out in society.

You can learn about these things by talking to missionaries who have served in the same place. If you don’t know one personally, you can find blogs of missionaries all over the world that contain helpful information. Or, talk with people who are actually from that culture. Thanks to globalization and immigration, there are likely people from other countries living in your town or city.

Read books that will help you learn the basics of world religions and culture, but keep in mind that those are just overviews and that each person you encounter may not exactly fit the mold.

Like parenting, there are a lot of mistakes to be made in cross-cultural ministry. But there is a lot of grace to be found in it, too. You don’t have to be an expert to share the hope of the gospel with someone who is much different than you.

For more on evangelism: OutreachMagazine.com/evangelism