Home Features When Certainties Are Shattered 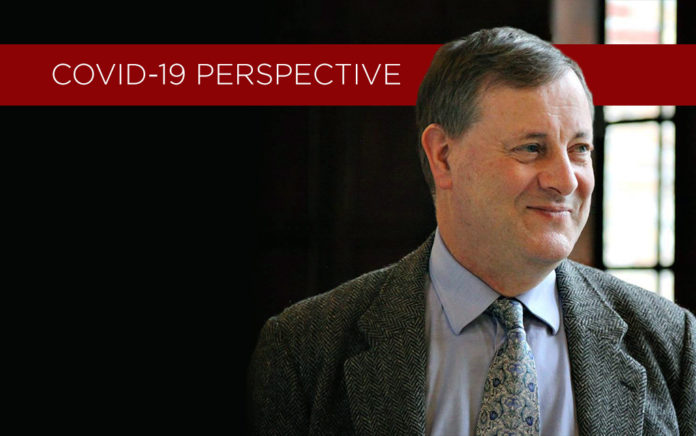 I guess we’ll all look back on the coronavirus outbreak of March 2020 as a moment of transition. For the last two months, I have been working at home in the beautiful English countryside, surrounded by the rolling hills of the Cotswolds. No airplanes fly overhead. There is hardly any traffic on the streets. Our […]

I guess we’ll all look back on the coronavirus outbreak of March 2020 as a moment of transition. For the last two months, I have been working at home in the beautiful English countryside, surrounded by the rolling hills of the Cotswolds. No airplanes fly overhead. There is hardly any traffic on the streets. Our schools are shut. I work at Oxford University—but am only allowed to “meet” students and academic colleagues remotely, using Zoom or MS Teams. When, we all wonder, will things get back to normal? And what will the new “normal” look like?

For Christians, this raises some important questions. How do we fit such lethal viruses into our way of thinking about God? My Oxford colleague John Lennox and many others have helped us think about how belief in a loving and sovereign God helps us to make sense of and cope with this coronavirus outbreak.

Yet coronavirus has raised far deeper concerns in the secular community. Interest in faith has soared as people realize that a naïve secular optimism has been shattered. People realize that they need something deeper and more resilient than the shallow platitudes of writers like Richard Dawkins. In my own journey of faith, realizing that the Christian faith makes sense of things was really important to me. One reason why I gave up on my teenage atheism was coming to see that the gospel was far better at engaging with the big realities of life and at helping me make sense of my world and myself.

I found an intellectual mentor in C.S. Lewis, who helped me to grasp how the Christian faith expands my mind as well as warms my heart. I can still recall reading some words from his essay “Is Theology Poetry?” for the first time in February 1974: “I believe in Christianity as I believe that the Sun has risen, not only because I see it, but because by it I see everything else.”

Yet Lewis is cautious: Not everything is as clear as we would like it to be. To develop his analogy, the sun of the gospel does indeed light up our world, allowing us to see more clearly and further than its rivals. But patches of mist and shadow remain. We do not see things with total clarity of vision. As Paul reminds us, we walk by faith, not by sight.

In my new book Born to Wonder: Exploring Our Deepest Questions—Why Are We Here and Why Does It Matter? (Tyndale), I explore what I think is one of the most important questions in the life of faith. How can we live meaningfully in the world when we cannot prove our core beliefs about God and the meaning of life? It’s an old question, given new meaning and urgency by the coronavirus crisis.

When I was an atheist, I was troubled by a question that is understandably evaded by recent writers such as Richard Dawkins and Christopher Hitchens. I knew I could not prove that atheism was true—yet my fundamental criticism of Christianity was … yes, you guessed it, that it could not prove its beliefs were true. I realized that I was someone who believed there was no God—not someone who could prove there was no God. In short, I had adopted a position of faith, believing yet not knowing for certain that I existed in a godless universe.

That insight is important. For a start, it helps us to see that it’s not just Christians who experience doubt. Atheists have the same problem. As they can’t prove their core belief, how do they know it’s right? Might they be wrong? The fascinating 2012 debate between Richard Dawkins and Rowan Williams at Oxford University put Dawkins in the difficult position of conceding that he was an agnostic, in that he couldn’t be sure of his core belief.

And having realized that atheism was actually a position of faith many years ago, I naturally began to wonder whether other faith positions—such as Christianity—might make more sense of our world than atheism. I had tended to forgive atheism for its imaginative bleakness and aesthetic drabness because I believed it to be self-evidently right. Yet what if I had bought into atheism because I wanted it to be right? What if I was an atheist because I wanted total autonomy? Might atheism actually be a form of wish fulfillment, in which I manipulate reality to correspond to my views on what it ought to be?

I began to realize that my youthful atheism was an underevidenced and overconfident hypothesis, an invitation to live as if there was no God while being unable to prove this premise was right. To begin with, I disguised this dilemma by pretending that atheism was exempt from the critical reasoning it used against its opponents. Then I realized that there really was a problem here. As many have pointed out, Richard Dawkins uses criteria to judge other people’s beliefs which he fails to apply to his own.

I often wonder if Dawkins had read the Oxford intellectual historian and philosopher Sir Isaiah Berlin. In his famous 1988 lecture “The Pursuit of the Ideal,” Berlin offered a scathing philosophical demolition of those who “have, by their own methods, arrived at clear and unshakeable convictions about what to do and what to be that brook no possible doubt.” For Berlin, this amounted to little more than wish fulfillment: “I can only say that those who rest on such comfortable beds of dogma are victims of forms of self-induced myopia, blinkers that may make for contentment, but not for understanding of what it is to be human.” When I read Berlin, I realized he was describing me when I was 16—and Dawkins when he was 60.

The reality about the human situation is that we are only able to prove shallow truths, not the ones that really matter. I can prove that 2 + 2 = 4, but I can’t prove anything about the meaning of life, the nature of good or the existence of God. But I can—and we all can—come to firm conclusions about these, which we personally find convincing and reassuring. Not being able to prove we are right does not mean that we are wrong, nor that we are irrational.

As C.S. Lewis discovered before me, the Christian gospel offers us a way of seeing and understanding our world that makes far more sense than its rivals. Born to Wonder opens up these questions, and explores them further, reassuring its readers of the reasonableness of faith, while at the same time showing how it casts light on so many issues of our time. Naïve secular certainties may have been shattered, but there is a better alternative. This crisis has opened minds; it’s time to help people discover why the gospel is so deeply satisfying and realistic.