Home Features Living Faithfully in a Culture of Moral Compromise 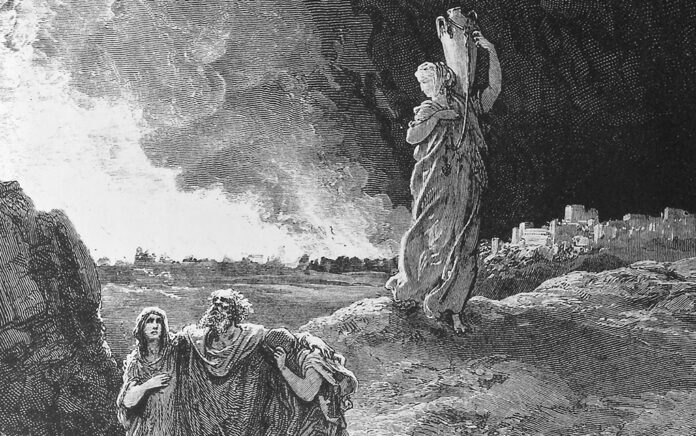 4 profound lessons we can learn from the story of Lot about sin, its consequences and our call as Christians.

When Lot chose the land to the East when Abraham went the opposite direction, no one could blame him. Genesis 13:10 says the land he chose looked like the garden of Eden itself. The pastures were green and fertile; there were plenty of places of water and shade.

The problem was that it stretched out toward two cities notorious for their wickedness, Sodom and Gomorrah. Genesis 13:13 says, “The people of this area were extremely wicked and constantly sinned against the LORD.” But that didn’t concern Lot; he liked the vibe of the cities, so he chose the land toward Sodom.

Lot not only lived near Sodom; he eventually became a leader in Sodom. Though it seems that Lot never went along with the worst wickedness in Sodom and kept most of his major morals intact, it’s also clear from Genesis 19 that he made many small compromises in order to be accepted in Sodom.

Most tragically, Lot kept his mouth shut about his identity as God’s servant and his faith in God. And in the end, Sodom was destroyed and Lot was saved, by the skin of his teeth.

But he lost everything, including his wife.

There are four life-saving lessons we can learn from Lot about the reality of sin and its consequences.

1. Beware of the Progression of Sin in Your Life.

Most Christians don’t intend to become Sodom and Gomorrah. Lot never intended to make Sodom his home, and he certainly didn’t intend to be included in its judgment. But many Christians, like Lot, are so attracted to the world that they make their home as close to it as possible. They end up identifying as much with the world as they do with the people of God.

The worst thing to do is to try to straddle two opinions. You can’t keep trying to walk along with your feet in both worlds. You have to make up your mind: Who do you really want to be? Where do you want to belong? If it’s with the world, go there 100%. If it’s with God, go with him 100%.

2. The Coming Judgment Is Real.

For years God had warned Sodom and Gomorrah about the coming judgment, and everyone brushed it off as unreal and went back to partying. But God makes no empty promises, and so one day, judgment came.

God tells us he is slow in executing judgment to give people space to repent, but don’t confuse his slowness with his absence. Hebrews 9:27 says, “It is appointed for man to die once, and after that comes judgment.”

“Imagine yourself cast into a fiery oven, glowing with heat. … And imagine that your body was going to lie there for a quarter of an hour, full of fire, inside and out—feeling every fiber of it the whole time. What horror would you feel at the entrance of such a furnace! And how long would that quarter of an hour seem to you! … But what if you knew you must lie there, enduring that torment in its fullness for 24 hours? … But wouldn’t your heart sink if you knew you must bear it forever and ever?”

The greatest hypocrisy of all time is saying you believe in heaven and hell and not doing everything you can to keep those you care about from going there.

3. You Cannot Drift Into Godliness.

Living for Jesus in this world will always feel like an uphill battle, because you are going against the current, and everything in the world will pull you in the other direction. If you are not actively fighting, you are drifting the wrong way, like Lot to Sodom.

To go with Jesus, you have to swim against the current, and that takes effort. Jesus said in Matthew 7:13–14:

“The highway to hell is broad, and its gate is wide for the many who choose that way. But the gateway to life is very narrow and the road is difficult, and only a few ever find it.”

If you’re drifting, you’re not actively seeking to know God and his Word. It’s not that you reject the Bible; you just give all your time to Snapchat, TikTok, Instagram reels, Netflix binging and video games. You spend all your time on your phone, staring at life in Sodom. What’s left over for spiritual growth is middling.

You’ll never drift into spiritual maturity. It takes daily, focused effort. To become what no one else is becoming, you have to do what no one is doing.

4. Become an Abraham to the Lots in your life.

When Lot hesitated while fleeing Sodom, “The angels seized his hand and the hands of his wife and two daughters and rushed them to safety outside the city, for the LORD was merciful” (Gen. 19:16).

Why did God have the angels do this for Lot? Look at verse 29: “But God had listened to Abraham’s request and kept Lot safe, removing him from the disaster that engulfed the cities on the plain” (Gen. 19:29).

God didn’t save Lot because of Lot. He saved Lot and his family because Abraham had prayed for them. Lot didn’t deserve rescue, but somewhere there was a man who loved him and prayed for him, and, for Abraham’s sake, God saved Lot. He sent his angels to literally pull Lot out of Sodom to safety.

Our role is the same: to pray consistently and persistently for God to keep those we know and love not just safe but faithful. And, we can pray for others with even more power than Abraham did.

Abraham’s prayer was like a negotiation: Lord, would you spare the city for 50 righteous people? How about 40? 30? 20? When Abraham finally got to 10, he just gave up. He couldn’t even find 10 righteous people in the city.

You and I need look no farther than one. There is one righteous, and he is so altogether perfect and lovely that God says we can pray in his name, and, for his sake, God hears our prayers. Our friends, our siblings, our parents—whoever it is on whom we have set our love—if we carry their names to God, he hears us.

Jesus did this for you: He prayed for you, and he came after you. Now, it’s your turn to do this for others.