Home Features The Cross and the End of Racism and Scapegoating 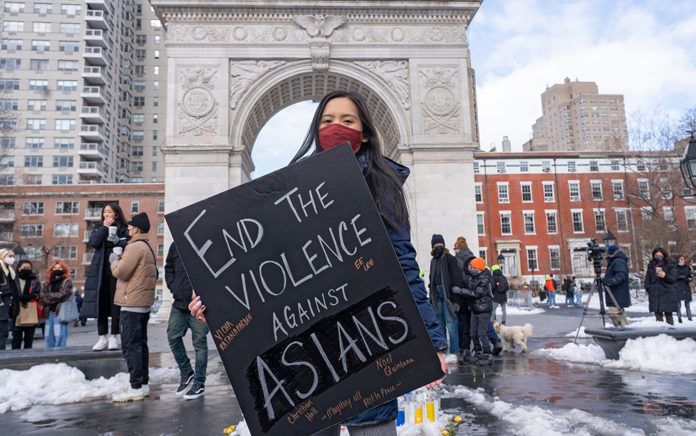 Christ’s sacrifice means the end of hatred, division and scapegoating

I warned of this in early 2020. Now it’s tragically hitting home.

Since the rise of the coronavirus over a year ago, there has been a massive spike in racism against people of Asian descent.

In the U.S. alone there have been nearly 4,000 reports of harassment, including assaults that resulted in deaths. The Center for the Study of Hate and Extremism recorded a 150% increase in hate crimes against Asian Americans.

Our capacity for sin as human beings is never-ending, but let’s recognize this for the evil it is:

And this brand of everyday hatred is actually as old as human society itself.

A few decades ago, a Roman Catholic scholar, René Girard, named this evil when he described the way groups of people typically deal with their internal group conflicts—by projecting their violence onto a scapegoat.

You’ve probably seen it or experienced it a bunch of times yourself. A group of people—prone to bickering or infighting—suddenly develops a newfound sense of unity around their blame of some poor sucker that is different in some way.

Think of it as Mean Girls for the rest of us.

The frenzied crowd will not rest until that person or group is expelled (or in extreme cases destroyed).

And then everyone can breathe easy, because a temporary sense of relief and calm has been restored.

The crazy thing is, it’s pretty easy to see that other people’s scapegoats are innocent victims, falsely accused of wrongdoing. But our own scapegoats seem to us like terrible people—bad guys who deserve our hatred and blame.

We see the innocence of other people’s scapegoats but never our own.

As an outsider here in Asia, it’s easy to see that many Cambodians have made scapegoats of the Vietnamese in their midst. Vietnamese are regularly rounded up and deported. Their businesses targeted. Their children picked on. Even by Christians.

From Outreach Magazine  Abortion: Responding to the 10 Most Common Arguments

It’s easy to see how the Rohingya people in Myanmar are unfairly maligned and mistreated by the Burmese government and wider society. They have been hounded out of Myanmar, onto rickety boats as refugees and asylum seekers along the coasts of South-East Asia.

But can I see the ways in which I have entertained racist thoughts and prejudices?

Political leaders throughout history have cunningly played on our fears and rallied us around their cause by focusing our hatred onto the designated scapegoats. Think of the dangerous scapegoating in the U.S. of various religious groups, immigrants and “s–thole countries.”

In this season of coronavirus, those scapegoats happen to be people with Asian facial features.

In the past those scapegoats have been Jews, Japanese, Blacks, Communists, Catholics, “the gays” …

In fact, almost every marginalized group has found themselves with that unwanted spotlight on them at one time or another.

But, here’s where this theory gets super challenging for followers of Jesus:

Does the term scapegoat strike you as vaguely biblical?

I’m guessing it does, because it originally comes from Leviticus 16:8 where a particularly unlucky goat was designated as the sacrifice that would take on the sins of the community and be cast out into the desert (not as unlucky as the other goat which was designated to be butchered though). Most ancient societies had similar practices.

As Christians, we recognize that Jesus was the ultimate scapegoat—the scapegoat to end all scapegoats. The one who came to put an end to our violence and racism and sin by willingly taking upon himself all that crap, once and for all.

“Christ was offered ONCE to bear the sins of many.”—Hebrews 9:28

“Christ, the son of God, is the ultimate scapegoat—precisely because he is the Son of God, and since he is innocent, he exposes all the myths of scapegoating and shows that the victims were innocent and the communities guilty.”

The work of Jesus on the cross demands that we put an end to our racism and scapegoating.

Coronavirus panic, refugee hysteria, Muslim fear. It all ends on the cross.

Jesus was not sacrificed to appease an angry deity. Instead, Jesus, God himself, entered our society and became the scapegoat, and in doing so, eliminated the need for any future scapegoats or sacrifices. It is a mystery worthy of the God of the universe.

To address our scapegoating is to begin to dismantle the violence in our hearts.

The gospel of Jesus invites you and me to lay our need to scapegoat at Jesus’ feet.

The gospel of Jesus takes our racism, and exchanges those things for love and the radical welcome of Christ.

The gospel of Jesus means that scapegoating is no longer needed.

Note: I first wrote these words in February 2020, and updated some of the figures above for reposting this month since the issue has only gotten worse.