Home Features Nicodemus, Joseph of Arimathea and the Empty Tomb 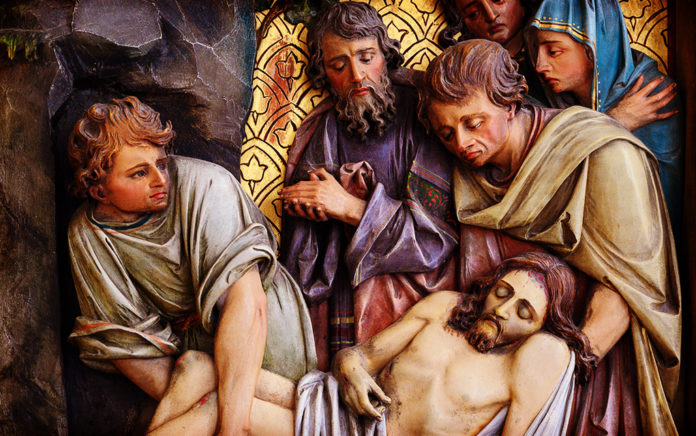 Somewhere between the trial before the Sanhedrin and Jesus’ crucifixion, Joseph of Arimathea and Nicodemus made a decision to take their private faith public with an extraordinary gesture. Perhaps exhausted by the long days, disillusioned by their fellow Pharisees’ embrace of injustice, or grieving over the loss of the one upon whom they’d rested their messianic hopes, they decided to give Jesus in his death what Israel refused to give him in his life: acknowledgement as King. So Joseph requested permission from Pilate, the Roman governor, to take the body of Jesus off the cross. The bodies of all three who died by crucifixion that night—Jesus and the two insurrectionists who died alongside him—would be removed, because Jewish leaders requested that the bodies not hang on the crosses overnight in violation of the law. Their deaths were hastened by the breaking of their legs to eliminate their ability to lift themselves up and find breath. Jesus, however, died many hours sooner, and his legs didn’t have to be broken. Instead, they pierced his side, confirming he had succumbed.

Joseph’s request caught Pilate by surprise. Jesus was dead sooner than he expected. Perhaps Pilate was relieved that this Jesus problem was finally taken care of. But he was probably even more surprised to see a member of the Sanhedrin standing before him, willing to risk position and reputation to give Jesus a king’s burial.

This is what Joseph and Nicodemus are doing here. Typically a criminal would be dumped into an empty grave or pauper’s field, buried ignominiously under a pile of rocks. So this was highly unusual, both that Pilate granted their wishes and for them to so publicly identify with an enemy of the state, one convicted of treason and insurrection.

There were a lot of important considerations here for Joseph and for Nicodemus and for the women who accompanied them to the burial of Jesus. First, this act was their way of giving Jesus, in death, the respect as King of the Jews that he didn’t receive in his life. He would be buried not in an empty field but in a rich man’s tomb, fulfilling the words of the prophet Isaiah (Isa. 53:9).

It was important for them to not only get the body off the cross, but to bury Jesus quickly before sundown and the start of Sabbath on Passover week, when work had to cease. Joseph’s tomb made sense as a burial spot, likely near Golgotha where Jesus was crucified but outside the city walls.

Both Joseph and Nicodemus did this at great sacrifice—Joseph giving up his tomb and Nicodemus paying for costly burial spices and ointments. John 19:39 says it was seventy-five pounds, an extraordinary amount, reminiscent of Mary of Bethany’s extravagant display of washing Jesus’ feet with expensive ointment.

From Outreach Magazine  Stop Talking Yourself Out of Evangelism

This was a difficult task, peeling Jesus’ bloody body off the cross and carrying him the distance to the tomb, body fluids still dripping. They had to carefully wrap him in the bandages and anoint his body with both the myrrh as a preservative and the aloes and perfumes to minimize the stench of decomposition. This was an act of love for Joseph and Nicodemus. Two high-ranking religious officials, stooping low and exhausting themselves to honor their Lord.

You imagine their friends, their families, wondering why these two men of stature would take such care for a rejected Messiah, a despised enemy of Rome. And as they performed this thankless task, racing daylight to get him into Joseph’s tomb before sunset, doubt and fear crept into their hearts. What would their lives look like next? If Jesus was God, how could he allow himself to be arrested by the Sanhedrin and crucified by the Romans? Why didn’t he summon the armies of heaven and fight back?

What they did know was that their private faith, the secret they whispered to each other in the halls of Jerusalem, would now be public.

Nicodemus and Joseph didn’t realize that Calvary did not spell the end of Jesus, but the end of death. The blood-encrusted body they laid in that tomb would soon come to life, shaking off the cloth wrappings and thus the chains of death. Nicodemus couldn’t have known that the expensive embalming ointments and perfumes used to give Jesus a King’s burial were only temporary. Joseph didn’t know that his fresh-cut tomb would only be a temporary resting place for the Son of God. This grave would sit empty forever, and so would the graves of those who know Jesus as Lord. Joseph’s prized real estate would stand as a witness of Christ’s triumph over the curse of sin. I’ve had the opportunity to visit Israel several times and see the two sites where it’s possible Jesus was buried. Both graves are empty.

The worst night of their lives, when darkness seemed to envelop the world, became the dawn of something new.

It’s easy for us to wonder why Joseph of Arimathea and Nicodemus were so quiet about their faith. We imagine ourselves having more courage by being more open with our faith. But I think this perspective is unfair and shortsighted. Courage looks different on different people and in different situations. At times Jesus did not speak or move about openly, knowing his enemies sought him but his time had not yet come. There are situations where prudence is the best witness, such as Christians in closed countries, working to slowly plant seeds of gospel witness, or Christians in prominent leadership roles, who must weigh their words in order to steward their influence. This isn’t always cowardice.

From Outreach Magazine  3 Key Facets of a Vision From God

This is hard for us to comprehend in an age when we think every thought has to be expressed all the time on every medium. Public proclamation is important, but so is the need to “seek to lead a quiet life” (1 Thess. 4:11) and to be “quick to listen, slow to speak, and slow to anger” (James 1:19). Their courage showed up when it was most necessary and not a moment too soon.

What’s more, the inclusion of Nicodemus and Joseph of Arimathea in the Easter story shows us how God works in mysterious ways to accomplish his purposes in the world and the gospel’s power to work in the most surprising places. The Sanhedrin seemed the last place to find disciples of Jesus. Even as the kingdom of God was moving among the poor and the outcast, it was also moving among the powerful, in the very councils that wrote his death sentence, pinpricks of light in a dark world.

Some of the most important evidence for Jesus’ resurrection would be gathered by the members of the very body that sent him to the cross. They both saw him physically dead, a lifeless corpse leaking blood and water. And they buried Jesus in a prominent place where nobody could mistake the miracle, so much so that Jesus’ enemies had to bribe the Roman soldiers assigned to guard Jesus to lie about it (Matt. 28:11–15).

God used Nicodemus and Joseph in creating the most important apologetic of the Christian faith. Without the empty tomb, we are, to quote Paul, “of all men most miserable” (1 Cor. 15:19). The secret disciples, by their quiet acts of faithfulness, shouted the good news of God’s redemptive love to the world.

Excerpted from The Characters of Easter by Daniel Darling (Moody Publishers, February 2021), originally appeared on Thinke.org and reposted here by permission.