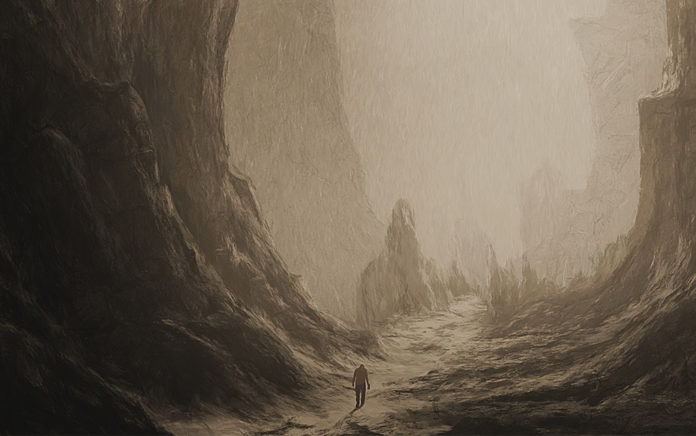 Jesus gave the disciples a glimpse of his glory to fortify them for the valleys to come.

I’m glad I don’t know the future. It would be very troubling to always know what will happen next. And of course, if I knew certain things were going to happen, I’d do my best to make sure they didn’t happen. Not only that, but there would be other things I’d try to make happen sooner, and I’d mess everything up.

Jesus, being God, had complete foreknowledge. He knew exactly what was ahead of him. He knew that his disciples would forsake him. Worst of all, he knew that although he was sinless, he would take all the sin, corruption and filth of the world upon himself and be momentarily separated from God the Father when he became the sin sacrifice for humanity.

Jesus wasn’t looking forward to this, but he knew it had to be done. And at the halfway point on his difficult journey, he experienced a significant event.

Leading up to this moment, a conversation took place between Jesus and the disciples at Caesarea Philippi, where he asked them, “Who do people say that the Son of Man is?” (Matt. 16:13).

They offered various answers, and finally Peter got it right, saying, “You are the Messiah, the Son of the living God” (v. 16). So Jesus commended Peter for his insightful statement.

From that point on, Jesus began to declare to the disciples how he must suffer many things at the hands of the elders and chief priests, be crucified and rise from the dead on the third day. This was a new movement in the ministry of Jesus where he openly and clearly addressed his certain future.

And Jesus apparently believed the time was right for some of his disciples, specifically Peter, James and John, to have a greater glimpse of his glory.

I find it interesting that Jesus singled out these three on a number of occasions. It might lead us to believe they were sort of the spiritual elite. And that’s one way to look at it.

But here’s another perspective: maybe they just needed spiritual attention. For instance, when I was in school and got into trouble, the teacher would say, “Greg Laurie, come up here and sit right next to my desk so I can keep my eye on you.”

From Outreach Magazine  Are You Exhibiting Grace at Home?

I wonder if Jesus thought, “I want to keep an eye on you boys.”

Don’t forget that James and John wanted to call fire down on people who weren’t hospitable toward them. That’s why they were known as the Sons of Thunder. And of course Peter needed attention as well.

Whatever the reason, Jesus singled out Peter, James and John for a rare privilege: to witness his transfiguration. There on the mountaintop, Jesus’ garments “became as white as light” (Matt. 17:2). His face shined like the sun. And the fact that Moses and Elijah were there speaking with him only added to the drama of that wonderful day.

We might think the miracle was that Jesus shined like the sun. That was a supernatural demonstration, but I don’t think it was a miracle. I think the real miracle was what happened on all the other days when Jesus didn’t shine like that.

The Transfiguration wasn’t so much a new miracle. Rather, it was the temporary ceasing of a habitual one. In other words, Jesus was God. For him to shine was not a great feat. A greater feat was for him not to shine all the time. Jesus veiled his glory.

In the New Testament book of Philippians, we read that Jesus:

“Gave up his divine privileges; he took the humble position of a slave and was born as a human being. When he appeared in human form, he humbled himself in obedience to God and died a criminal’s death on a cross.” —Philippians 2:7–8

Jesus never stopped being God. But he laid aside the privileges of deity and walked among us as a man.

So at the Transfiguration, he was effectively saying to Peter, James and John, “Take a look and see who I really am.” He let his glory shine out. And who wouldn’t be dazzled by such a display? It was so wonderful, so awe-inspiring, in fact, that Peter wanted the moment to last forever. He blurted out, “Lord, it’s wonderful for us to be here! If you want, I’ll make three shelters as memorials—one for you, one for Moses and one for Elijah” (v. 4).

When something wonderful happens, our natural inclination is to hold on to it, to freeze it in time and never let it go. But God doesn’t want us to build our tabernacles in the place of glory when the world is in flames.

Waiting for Peter, James and John at the bottom of the mountain was cold, hard reality. They learned that we can’t always have mountaintop experiences. On those occasions when we do, they’re preparing us to live in the valleys.

The real character that God develops in our lives usually doesn’t happen in those great moments when we bask in glory as much as when we’re in the valley of reality, putting into practice what we’ve learned.

As this world grows darker, our tendency is to want to withdraw into our own subculture instead of realizing there’s a world out there in need. We may think, Oh, I wish I could find a Christian city. We could have a Christian mayor, Christians on the city council and Christians on the police force. Everyone would be Christians, and that would just be wonderful.

Often after the great works of God in our lives, there will be challenges. But don’t dread them. Just keep moving, keep growing and keep learning.

For our small faith to become great faith, we must apply it. We must use it and stretch it. And we must avoid the temptation of spiritual slumber and laziness so we don’t miss out on what God is doing.

This article originally appeared on WND.com and Harvest.org and is reposted here by permission.