Home Features Trading Contempt for Compassion in the COVID-19 Debate 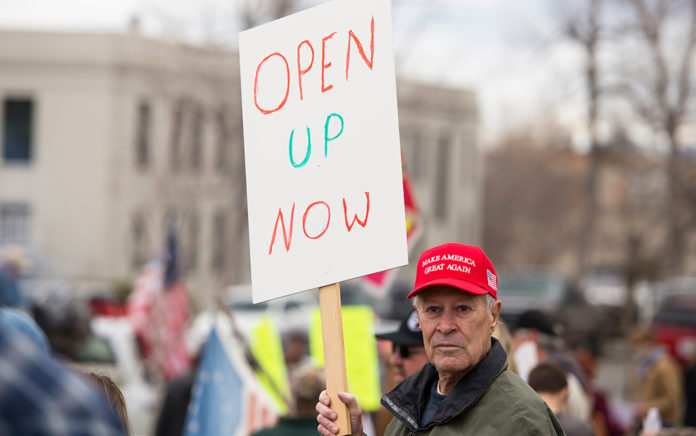 Responding with compassion no matter how we feel about the quarantine.

Compassion is an odd thing. When we think we don’t have enough of it, it can emerge from seemingly nowhere. When we are certain we are filled with it, we find we respond in ways we ought not. And often, our compassion meters are put on display when it comes to how we respond to those who seem least like us.

We are seeing a lot of scorn and anger targeted at protestors wanting to open the economy—often MAGA-hat wearing pro-Trump supporters. “They must just be ignorant hicks,” some say. “They are going to get sick—and get us sick.” “What a bunch of idiots.”

It’s important, however, that before we judge, we consider. That before we condemn, we pray. All of those who act in ways we disagree with are made in God’s image. We may believe our thoughts and opinions are the correct ones, but we must never forget that there are two sides of each story and many lenses through which to see the world.

There are a lot of frightened people out there, many of whom were already having financial strains. Now, too many of these people are unemployed or underemployed because of the impact of COVID-19.

So, if you are sitting at home, working from home because your job allows it, have a little compassion for people who are watching their future dissolve, are fearful for their children’s future, and who just want to work.

Hard truth, friends: We have got to listen a bit more to one another right now.

A lot of people are afraid and frustrated. And, there are some groups who are being disproportionately affected. Among them, economically, are working-class white people.

Jenn Thomas, a single mother with two children, is worried about the economic impact of government restrictions on businesses. She observed in an interview, “We can’t just continue to keep closing things up and disrupting people’s lives where [COVID-19] is not affecting people like myself physically.”

The story explained that Thomas moved to California to open a hair salon last September. Her business was doing well until the mandated business closures came in response to the pandemic. “I don’t want to lose my house,” she said. “My livelihood is in dire straits. When is this going to end?” She planned to participate in a protest at the state capital calling for state officials to reopen businesses.

Can you have compassion for her? Does that compassion not apply if she is wearing a red hat?

Like Thomas, many Americans who are currently jobless fear the long-term implications of the closures. They wonder if the restrictions are necessary in areas where the virus doesn’t seem as widespread.

They are afraid. The pictures of them, sometimes protesting with political signs, makes them easy to caricature.

From Outreach Magazine  Is the Online Church Really the Church?

We need to feel a sense of compassion, but instead, far too many of us feel contempt.

We explore the issue of contempt at length in my book Christians in the Age of Outrage—it is one of the great challenges of our day. Far too many people rush to contempt when they might consider compassion. People are afraid.

I’m not endorsing everything that everyone says. And, I get some politicians are taking advantage of the situation. But, I can’t get past the fact that there are a lot of people who are afraid—for their families and their future.

I’m hurting with them.

But, of course, working class whites are not the only ones experiencing disruption. Actually, African Americans are dying at a much higher rate.

They are experiencing both economic and disproportionate health challenges.

Jay Banks is a New Orleans City councilman. He is also chairman of one of the many Mardi Gras entities there—one which has seen six of its group die of the disease in recent days. He worries about the disproportionate number in the African American community who are dying from the disease. “You’ve got to get people to understand just how serious and devastating this thing [COVID-19] is,” he says.

The evidence is clear that African Americans are disproportionately affected by this virus. I recently talked to Chicago African American pastor Charlie Dates, who had two members of his church lose their lives to COVID-19. The Church of God in Christ, the nation’s oldest and largest African American Pentecostal denomination, reports that well over a dozen bishops and pastors have died.

I can’t get past the fact that there a lot of people who are afraid—for their health, for their communities, and for their families and their future.

I’m hurting with them.

ENOUGH COMPASSION FOR EVERYONE

So, the statistics on unemployment are dire. In February, unemployment rates were at a multi-decade low of 3.5%. The U.S. was cruising along well in terms of jobs. But now, estimates are that unemployment will hit 16% by July, the highest since the Great Depression.

Many Americans were already vulnerable economically before the pandemic hit. The working poor, many who live in both rural and urban areas, live just above the poverty line and have no savings or recourse in times of sudden joblessness. “If they don’t show up for work, they don’t get paid. To get to their jobs, they have to take mass transit, putting themselves in closer contact with more people and, therefore, at greater risk of infection,” one article noted.

From Outreach Magazine  Making Mistakes in Ministry: An NBA Finals Lesson for All of Us

And, still, people are dying. If we open up the economy too soon, more will die.

And vulnerable people are losing everything.

WE CAN CARE ABOUT BOTH

I’m of the opinion that we need to keep our businesses and nonessential services closed as long as we need to keep them closed as long as we are saving lives, and that we must slowly reopen in such a way that we do not have a rush of new cases. Doctors tell us we aren’t ready to reopen; business owners are saying we should begin doing so responsibly. We can have our opinions, but during the crisis we must lean on experts to make well-informed, well-considered decisions.

And we continue to be the church. And what we cannot do as the church is be blind or insensitive to people who are hurting due to pride, prejudice or misinformation. We cannot treat urban African Americans who are seeing family and friends die as invisible. Our priority is to all. Always. Neither can we judge Trump supporters based on what we do not know of their lives.

The world does not need more contempt. It needs more compassionate Christians.

Now is the time to move past our narrow thinking, worldview and experience, and to step into the shoes of the other, for the sake of the other. We need to listen to all who struggle in this pandemic. And the list of those who struggle is long: Trump supporters who have lost their jobs, urban minorities experiencing injustice, those who suffer from mental illness or abuse, health care workers unable to be with their families, children in broken homes, single parents, the homeless, the hungry, the hopeless, the elderly.

Now, and in the coming days and months, our first priority is not to ourselves or our churches. Our first priority is for those suffering and on the margins. May we never forget it. Jesus didn’t. And his call is still on our lives to leave all and follow him in caring for others. All others.

So, let’s pass on the contempt and follow the way of Jesus.