Home Features Breaking Free From the Limitations We Accept 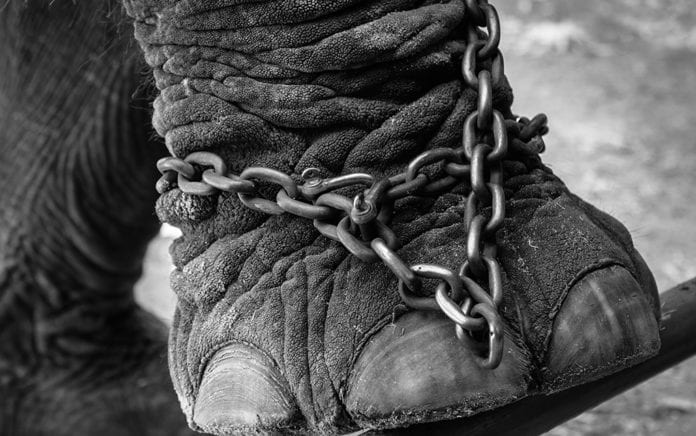 God did not save you to tame you.

Several years ago, I watched a documentary about a bull elephant—the type you can see at a circus—and I learned a valuable lesson that has stuck with me ever since. As I watched the program, I was amazed by the elephant’s formidable frame and intimidating tusks, which cause would-be-offenders to back off.

But what intrigued me the most about this bull elephant was the fact that it was limited by a ball and chain which was fastened on one of its rear legs. Whenever this massive elephant would walk a few feet, it would feel the tug of the chain, stop and go no farther. This occurred several times. Baffled, I wondered, “Doesn’t this elephant know that it has the strength to break out from its chain and go on a rampage?”

To my relief, the trainer explained the dilemma. When the bull elephant was young, circus trainers had placed a chain around its leg that was attached to a weighted ball buried in the ground. Initially, the young elephant would attempt to break free once it felt the tug of the chain, but because of its lack of strength, it failed. Sadly, as time passed and the elephant grew, it was conditioned to believe that the limitations placed upon it by the ball and chain were as far as it could ever go. Because the elephant failed to realize its strength and accepted defeat, it lived far below its potential.

Does this sound familiar to you?

Unknowingly, some of us can be like that bull elephant—conditioned by the limits placed on us by ourselves or others. Maybe you’ve grown up believing that you’ll never amount to much, or perhaps you’ve worn labels such as “failure,” “stupid,” “ugly” or “not good enough.” These are all lies from the Enemy in an attempt to diminish you.

Have you tolerated defeat long enough that it has become a way of life? You may not be bound to a ball and chain, but you find yourself bound to other things that hold you back. Perhaps you’ve stepped out in obedience to God only to feel the tug of fear, insecurity or inadequacy, and allowed them to stop you in your tracks?

From Outreach Magazine  What to Do With Our Desires

If that’s you, then it’s time to stop making excuses for your captivity and loosen yourself from your chains. God did not save you to tame you. In Christ, you have all the strength you need to rise up, break free and live in victory. I love the advice Isaac gave his son Esau:

Notice Isaac did not say, “When God thinks it’s the right time for you to be free, he’ll take the yoke off you.” Nor did he say, “When God decides you have suffered enough, he will remove the yoke from you.” In fact, God is not even mentioned in this verse. Other translations say it this way, “But when you can’t take it anymore you’ll break loose and run free;” “But [the time shall come] when you will grow restive and break loose, and you shall tear his yoke from off your neck.”

Your freedom begins with a decision. A decision is not a wish, but a resolute commitment to a course of action. Understand that what you tolerate will never change. When you justify a behavior, you buy into that behavior. But you don’t have to live that way any longer—freedom and victory are within your grasp. Now, what are you going to do about it?

Excuses have never set anyone free.

From Outreach Magazine  What Will Multisite Churches Look Like After COVID?

This article originally appeared on MessengerInternational.org and Thinke.org and is reposted here by permission of Thinke.org.