Home Features How to Make Your New Year’s Resolutions Stick 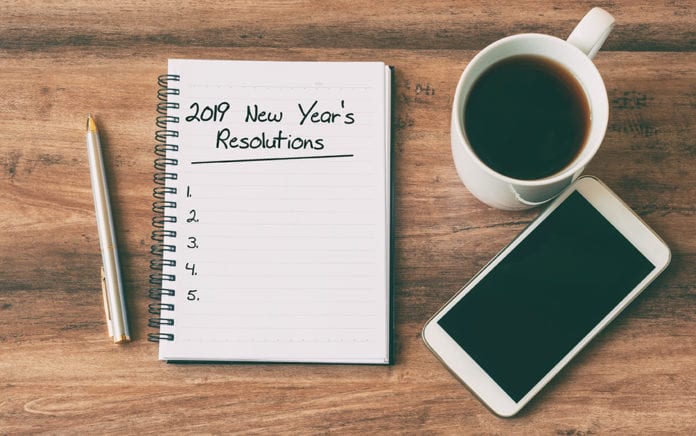 Before you embark on your New Year’s resolutions, take a look at these tips for making them stick.

Every year millions of Americans (including me) make New Year’s resolutions. Of course, just as predictably as these resolutions are made, they’re broken. By February, 80 percent of us have stopped jogging, started sleeping in or jumped headfirst back into whatever old habits we promised to break. Within mere weeks, that list we conceived in a burst of optimism becomes a quiet source of shame. Twelve months after making our resolutions, only 8 percent of us have stuck with them. Why?

Well, the first problem is that we tend to make New Year’s resolutions (plural). A New Year’s resolution would stand a chance at sticking; resolutions, however, have nearly no chance. It goes back to our conversation about willpower. Like we’ve seen, once a habit is established it takes very little effort to keep it going. Just tug the elephant’s ear occasionally, and the large animal keeps lumbering along. But that’s not true of initiating a new habit. Forming a new habit (especially a good habit) is a tremendous draw on your willpower reserves. Initially the new behavior may be physically or mentally challenging. It will cut against the grain of your natural inclinations. It’s takes effort. Lots of it. Multiply that output of effort by three or four or five, like we often do with New Year’s resolutions, and you’re almost guaranteed to fail. It’s like trying to climb a mountain—with someone on your back.

If you’re trying to build new habits in your life, introduce them one at a time. Don’t start a diet the same day you begin running. Don’t launch a new Bible reading program the same day you resolve to start praying every morning. This may feel counterintuitive. There are defining moments in life when we want to reset and change everything. In our zeal to begin fresh, we resolve to change all kinds of behaviors at once. Unfortunately, our enthusiasm to make sweeping changes guarantees we’ll fail to make any. So rather than trying to create multiple habits at once, focus on creating one habit at a time. Once you’ve established one healthy habit, then use your replenished willpower to move on and create another.

“A nail is driven out by another nail. Habit is overcome by habit,” wrote the sixteenth-century theologian Desiderius Erasmus. Five centuries later we understand just how right he was. Study after study has demonstrated the wisdom of starting a new habit by replacing an old one. By doing this, you essentially get a two-for-one deal: You lose a bad habit, while gaining a good one. Smokers, for instance, are very unlikely to quit if they don’t find some replacement behavior to smoking. “You can’t extinguish a bad habit, you can only change it,” Charles Duhigg writes. And the way to change it is to perform a sort of surgery on the loop of the bad habit. “To change a habit, you must keep the old cue, and deliver the old reward, but insert a new routine” (The Power of Habit, 2014).

When trying to establish a new, healthy habit, start small. If you try to do too much on Day One you’ll drain your willpower and fail to repeat the behavior the next day. And without repetition, new habits can’t take hold. Remember: At the outset, you’re trying to trick your brain into forming a new habit. Psychologists refer to this approach as forming “tiny” or “micro” habits. It’s a tactic to use the habit loop to create a pattern of behavior that you can build on.

Say you want to start running every morning. Begin by identifying a cue: maybe it’s drinking a health shake or seeing your running shoes at the front door. Then perform the routine in a way that doesn’t demand exerting too much effort. Perhaps it’s just walking around the block once. Or it could be even smaller: Put your shoes on and jog in place for thirty seconds. When you finish, give yourself a reward. It could be a cup of coffee, a piece of chocolate, or a few minutes watching TV.

At first, it might feel silly to reward yourself for completing such a small task. But remember, you’re conditioning your brain. When you see those shoes by the door, your brain will expect exercise. As you exercise, it will begin anticipating a reward. As you move through this habit loop repeatedly—cue, routine, reward— the behavior will become cemented into your life, and you can gradually increase the intensity of your workouts. Soon you’ll head out to run every morning without even thinking about it.

Another cardinal rule of habit formation: Be consistent. Don’t run first thing in the morning one day, and go for an evening jog the next. Pick a time and try to stick with it. If you’re trying to read your Bible every day, try to do it at the same time, in the same room, in the same chair. When it comes to making a habit stick, familiarity is key. I’m not suggesting you slog through new practices—especially spiritual ones—without feeling or passion. But you’re far more likely to stick with the new behavior through the crucial habit-forming window if you keep the conditions the same.

How long does it take to form a habit? The most common answer is twenty-one days. At least that’s the number that gets bandied about in advice columns, blog posts and TV shows. In truth, the twenty-one-day guideline only works for very simple tasks. If it’s something more difficult or complex, research shows that three weeks is probably too optimistic. One large study found the average number of days it took for participants to reach “automaticity” (scientific speak for when behavior becomes habitual) was an average of sixty-six days.

From Outreach Magazine  Gathered and Scattered: CrossWinds Church in California

As you can see, habits aren’t developed overnight. It takes at least a month or two of concerted effort to continue performing a certain behavior before it becomes second nature. When I look back at many of my attempts to get healthier or practice a spiritual discipline, I’m struck by how often I’ve given up after a week or two. Often we don’t even realize how close we come to that magical threshold where the behavior becomes second nature. Now, when I’m trying to create a new habit, I’m conscious of pushing through to that point. It’s encouraging to know that the behavior will become more automatic as I go, demanding less and less effort over time. I try to remember pastor John Ortberg’s words on why we struggle to form holy habits: “Construction today. Freedom tomorrow.”

Adapted from Your Future Self Will Thank You by Drew Dyck (©2019). Published by Moody Publishers. Used by permission.