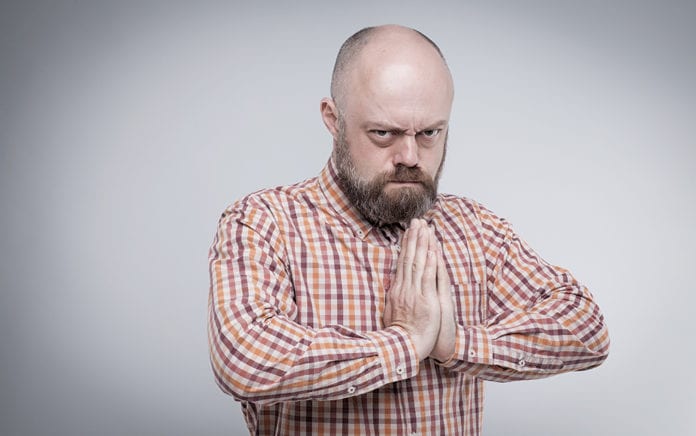 Is it ever OK to get angry? Jesus gives us an example of what it looks like to be angry and not sin.

Have you ever sent an email in haste that you wish you could take back? Or accidentally hit “reply all” when you were responding in anger?

Years ago, another pastor and I were interacting with a local ministry leader who was not our favorite. This ministry leader sent an email to our college pastor, who forwarded it to me and unleashed all of the annoyance he had. The key phrase there is, “to me.”

Because, as it turned out, he sent it to the ministry leader, too.

I didn’t notice that he had replied all until after I read the entire caustic email. I immediately ran down the hall to his office, only to find him face-first on the floor. All he could say was, “I know.”

Thankfully, the ministry leader was gracious about it, but, understandably, our relationship with them has never been great. You just can’t take that stuff back!

There are good ways and bad ways to deal with anger, and hindsight too often seems to be the key to knowing the difference. I don’t know anyone who doesn’t look back and wish they could take something back they said or did in anger.

The best way to know the difference between good and bad anger is to follow the example of Christ. The Apostle Paul seems to summarize Jesus’ approach to anger in his confusing instructions in Ephesians 4:26: “Be angry and do not sin.” That verse may seem odd, but it perfectly depicts Jesus. Yes, Jesus got angry, but he was always sinless.

Jesus shows us three right ways to be angry:

1. Loving Anger Is Redemptive, Not Vindictive.

It is directed toward the problem, not the person. Here’s how Paul says it: “Let no corrupting talk come out of your mouths, but only such as is good for building up, as fits the occasion, that it may give grace to those who hear” (Eph. 4:29).

Your goal should be to build up the other person and show grace, like Christ did for you.

From Outreach Magazine  20 Lessons From 20 Years of Marriage

Loving anger is void of the slightest drop of malice or desire to make that person pay for what they did. Jesus had the best illustration for this in Matthew 5:39: “If someone slaps you on the right cheek, turn to him the other one also.”

Having your cheek slapped isn’t an attack so much as it is an insult. So when it happens, you have three choices: (1) You can strike back, revealing that anger is controlling you. (2) You can offer them the same cheek, taking a passive aggressive approach until you finally lose control and explode. Or, (3) you can turn to them the other side of your face in an attempt to confront the evil in them and restore the relationship.

Loving anger is always focused on eliminating the sin while drawing close to the person. It should feel like an invitation to fellowship, not an execution of vengeance.

When Paul tells us to “let all bitterness and wrath and anger and clamor and slander be put away from you, along with all malice” (Eph. 4:31), he’s talking about avoiding that state where you feel consumed by anger—whether that comes out aggressively through shouting or passively through slander.

The book of Proverbs says a lot about anger; it doesn’t, however, counsel “no anger” so much as slow anger: “Whoever is slow to anger is better than the mighty” (Prov. 16:32). It tells us that getting angry quickly rarely has a good effect: “An angry person stirs up conflict, and a hot-tempered person commits many sins” (Prov. 29:22). Rather than quick and reflexive outbursts, it counsels us to respond with patience: “A gentle answer turns away wrath, but a harsh word stirs up anger” (Prov. 15:1). Proverbs 19:11 says, “It is to one’s glory to overlook an offense.” Sometimes the best thing to do with a wrong done to you is let it go—that is your glory and will diffuse a lot of anger.

You confront the person for the wrong and then commit the injustice to God and let him deal with it. Then you can go to sleep an unburdened person, and the sun has not gone down on your anger like we are commanded in Ephesians 4:26.

When my wife and I got married, we tried to put this verse into practice a little too mechanically. We said, “Let’s never go to bed until we have everything resolved.” And all that did was just to lead us to a few sleepless nights, because even after we talked about the issue, one of us would still be angry because the other didn’t see things their way.

This verse, however, is not talking so much about resolving all your interpersonal issues every day before sunset. (After all, resolving conflict takes two parties, and sometimes the best way to resolve a conflict is to be patient.) No, Paul’s words here aren’t primarily about handling disagreements swiftly. They’re more about an attitude you take into your disagreements, where you don’t carry the burden of settling the score or even getting the other person to see things your way. You can confront the wrong and then go to bed and leave vengeance to God.

In Matthew 21, right after Jesus drove the moneychangers out of the Temple with whips, verse 14 says the lame and the sick came to him. He didn’t scare people away with his anger but was just as approachable after his anger as before. Why? Because his anger wasn’t an explosive character flaw. It was focused, redemptive and short-lived.

Is that what happens right after you are angry? If not, what better time is there than today to take your sinful anger to God and ask him to transform it?