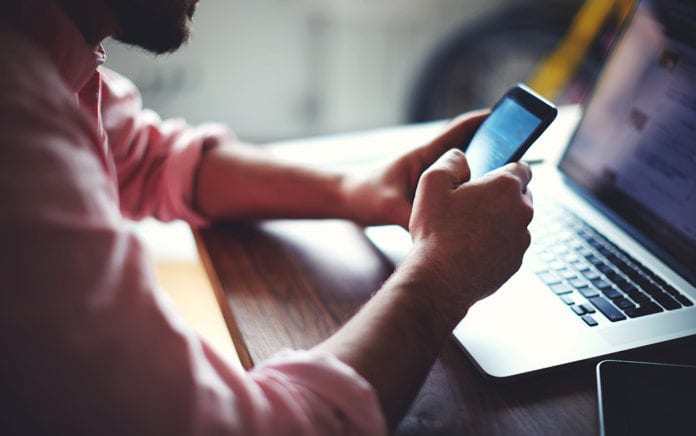 Digital technologies have outpaced our discipleship efforts. Here’s why we need to focus on digital discipleship.

In 1988, my wife Donna and I planted our first church in Buffalo.

Many of the issues I confronted in my congregation still exist today. We still struggle with encountering racism and sexism in the pews and in the world. While the drugs might have changed, confronting the prevalence and destruction of addiction is still very much at the center of church life today.

Yet for all the similarities, it is hard to overstate just how much the rapid advance of digital technology and the internet have changed life in and out of the church. Consider two different data points from a Pew tracking poll:

The introduction of instant communication with anyone at any time and across multiple kinds of mediums changes the way we engage others. Suddenly we are never alone; we carry our friends and family in the palm of our hand.

Data Point #2: Smartphone usage has grown from 35 percent at their introduction in 2001 to 77 percent in 2018. Parallel to cellphones, smartphones have gone from non-existent to seemingly essential. More than just our family and friends, suddenly the entire world is open to us. We are always plugged in, always connected, always presented with endless voices shouting for our attention.

Given these two points, is it surprising that the congregations pastors engage every Sunday are radically different than those I stood in front of in 1988? In my new book, Christians in the Age of Outrage, I argue that this rapid change is one of the main causes for outrage today. We have all these new technologies and online platforms by which to instantly react and to amplify the loudest, most divisive voices. We are a society where everyone has a megaphone and an increasingly smaller capacity to resist using it. Unfortunately, the church, like the rest of society, has been slow in adapting to this change. There is a technology discipleship gap between the importance of technology in our daily lives and how effective Christian leaders are at discipling their people in proper technology usage. In the book, I reflect on this:

“Christians often have the same bad habits as everyone else, practices that damage not only their well-being and relationships, but also their spiritual vitality and witness. Despite these dangers, when was the last time your church taught on social media or proper media consumption? Substantive, disciple-making teaching on how Christians can develop godly technology habits? Aside from youth pastors warning of cyberbullying, when have messages touched on the way technology is shaping our lives or how our online behavior relates to our faith? I have heard plenty of sermons that address the problem of pornography, but I can count on one hand the number of times a pastor or Sunday school teacher discussed a more comprehensive online discipleship.” —Christians in the Age of Outrage (Tyndale, 2018)

Christians have seen the emerging digital marketplace, and rather than thinking critically about its nature and effects, they have dived in. Innovation for the glory of God, we tell ourselves, even though we know that innovation for the expansion of the platform is often closer to the truth. Discipleship may not even cross our minds.

In a recent study we conducted at the Billy Graham Center Institute in partnership with LifeWay Research, we explored the ways that technology and social media impact the lives and witness of evangelicals.

We found that technology and online habits of evangelicals largely mirror those of the general public, if not slightly exceeding them. By far, the most common social media platform is Facebook, with over three-quarters of evangelicals by belief (77 percent) saying they regularly use the website (compared to 71 percent of non-evangelicals). Although not as widespread, YouTube (46 percent), Instagram (28 percent), and Twitter (22 percent) all record significant usage among evangelicals. 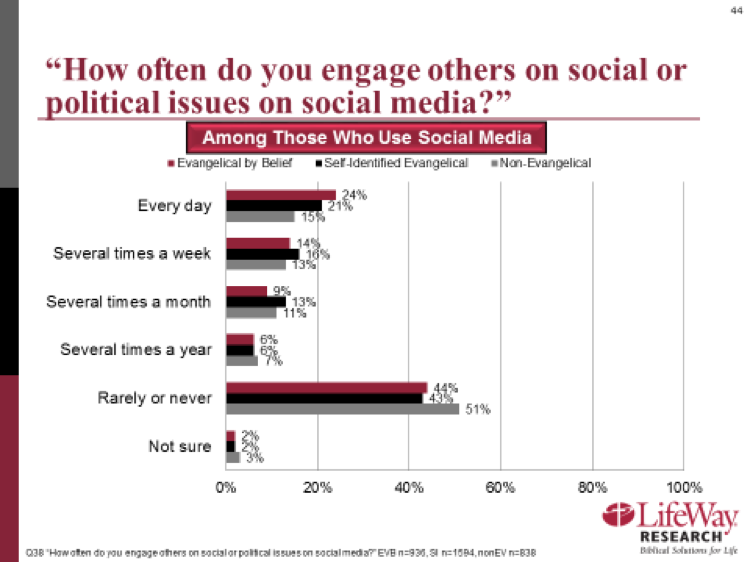 From Outreach Magazine  The 10 Most Common Realities When Churches Regather

Contrast that with almost half (44 percent) saying they rarely or never engage others on social or political issues. This paints a challenging picture of the modern congregations evangelical pastors confront each Sunday.

A significant majority of congregations use social media regularly with some engaging on controversial issues daily and some avoiding them like the plague. Every week, you have congregants hurting their witness from destructive online rage fights while others have only a vague idea of what you mean by “the Twitter.”

How do you disciple a congregation with such wide differences in behavior?

Our new digital technologies and social media platforms have untold potential to advance the gospel of Jesus Christ. At the same time, they can utterly lay waste to people, churches and communities.

Effective discipleship helps Christians to bend these tools in service to Christ rather than to become slaves to their destructive power. In my book, I outline several principles for Christians to consider in aligning their online behavior with their profession of faith.

At the same time, I encourage Christians to view local ministry within your community and through your church as the primary mission field of the believer. At a time where technology is making communication more isolating and distant, engaging our neighbors with the gospel has become counter-cultural.

It’s a new world, one fraught with division and anger with the unforeseen capacity to bring them into our living rooms and church pews. Christians need to think carefully on how they can live and engage in this new world to the glory of Christ and the furtherance of his kingdom.