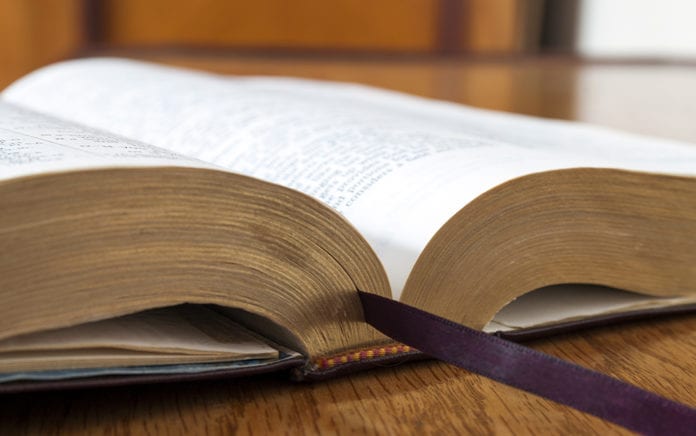 How are we meant to read passages on warfare, genocide and violence against women in the Bible?

A few years ago, a man came to see me, deeply unsettled.

He had recently heard a sermon on Judges 11:29–40. In this story, a warrior named Jephthah swears that if God grants him victory in war, when he gets home, he will sacrifice the first thing that comes out of his house—which turns out to be his daughter. Jephthah mournfully declares that he must keep his vow to God, and his daughter agrees to be sacrificed after two months to grieve with her friends.

The preacher concluded his presentation of the story by praising the virtue of Jephthah’s daughter, commending her as a fine example of biblical obedience.

“What on earth am I supposed to do with a story like that?!” the man demanded. “What kind of book sends a woman home to the man who means to kill her?”

Anyone who has spent any time in the Bible could probably compose a list of stories that leave them baffled or reeling. Many committed followers of Jesus feel quietly conflicted about Christianity’s holy book—particularly the Old Testament. Tales of warfare, genocide and violence against women could not seem any farther from the “good news” that brought them to faith.

What does a person committed to the gospel of Jesus and the sacredness of Scripture make of stories that seem to reflect the worst of humanity—sometimes even implicating God in the horror? In what sense does a story like Jephthah’s daughter function as inspired literature?

These are vitally important questions; they invite us to take a deeper look at what the Bible is and how its pieces fit together. Following a few basic reading practices can help us find our footing as we navigate some of the Bible’s darker chapters.

4 BASIC READING PRACTICES FOR THOSE BAFFLING STORIES IN SCRIPTURE

1. Remember That Not Every Story Has a Moral.

The story of Jephthah’s daughter might be read as a case study in obedience. Or it might be read as a cautionary tale about the dangers of rash oath-making. It could even be read as a wisdom tale, suggesting that a point may come when it’s better to stop and own your mistake rather than continue careening forward in an increasingly destructive direction.

My point is this: the biblical story itself asserts none of these things. It simply tells us what happened.

The stories of the Bible were not composed primarily as morality tales. They are not always endorsements of particular behavior. They show life and the world as it is, not necessarily as it should be.

The Bible offers stories of real people in real relationship with a very real God. We see their victories and screw-ups, their obedience and misunderstandings, and all the ambiguous space between. These stories form our imaginations for the possibilities—and potential pitfalls—of a life shared together with God.

Rather than coming to us with an explicit moral landing point attached, many stories paint a picture and then draw us into a sacred conversation—a conversation about what it means to be a people set apart for God in a world where values collide and where the best course is not always clear. Not every biblical story exists to give us an answer. Some stories teach us to ask better questions.

From Outreach Magazine  The Neighborhood and the Nations

2. Ask Why a Particular Story Was Preserved.

When we are at our most bewildered, it can help to remember that we, as Christians, are approaching the Bible as authorized eavesdroppers on someone else’s conversation. Every story that is in the Bible is present because a particular historical community made the decision to tell it, copy it, preserve it. What was significant to them in their own cultural context may be rather different from what seems significant to us thousands of years and half a world away.

The story of Jephthah’s daughter ends with reference to a tradition where for four days each year, the young women of Israel would go away to remember Jephthah’s daughter. One reason this story may have been preserved by the community of Israel is to explain the origin of a well-known local custom.

For people in a different culture where this custom does not exist, the story may not serve its original function. In other words, it’s not always all about us. But just because the original intent no longer fully applies doesn’t mean the story can’t still speak to us. Knowledge of this annual tradition in Israel might, for example, provoke us to consider how we as a contemporary community of faith commemorate significant losses or injustices.

3. Put Every Episode in the Context of the Larger Plotline.

In television, every episode typically follows its own short story arc. Flipping channels at night, you could probably make some general sense of any single episode, selected at random. But chances are there is also a larger plotline developing across multiple seasons whose full meaning is only accessible to someone who watches the entire show.

The Bible is very similar. Any individual story has some meaning, standing alone. But it is also contributing to a larger plotline that extends across the entire Bible. The true significance of a particular story only becomes clear when we understand its contribution to the whole.

The book of Judges, where Jephthah’s daughter appears, contains some of the darkest tales in the Bible. Read in isolation, it’s difficult to derive much meaning from these horrifying stories of rape, murder, and war. However, the book closes with this critical summary:

This closing statement situates the dark stories of Judges within the Bible’s broader plotline. One major function of these stories is apparently to illustrate the chaos that results when the only arbiter of truth is the individual conscience. The stories help explain why Israel moves from a federation of tribes to a monarchy.

When we find ourselves especially perplexed about a story’s meaning, it’s useful to take a step backward and situate that story within the Bible’s greater plotline. The significance of some stories may lie less in themselves than in how they are contributing to the plotline’s forward movement.

The Bible makes a few important claims about itself, but its most frequent and extravagant claims are about Jesus. He is the Word of God made flesh (John 1). All the fullness of God was pleased to dwell in him (Col. 1:19). Those who’ve seen him have seen the Father (John 14:9). In the past, God has spoken in many ways, but now God has spoken through a Son who is the very imprint of God’s being (Heb. 1:1¬–3).

The Bible is explicit on this point: Jesus is the end the whole plotline has always been moving toward. Much like with classic films like Fight Club or The Emperor Strikes Back, once you know “the grand reveal,” everything that came before looks different. The details finally fall into proper alignment.

The people of Israel lived forward, watching and listening in real time for what God was saying and doing around them. As Christians, however, we have the incredible advantage of hindsight. Having seen God revealed in Jesus, we are able to look backward with new clarity and finally understand how the pieces fit together. Meeting Jesus is rather like putting on a pair of glasses. It turns out that not everything is exactly as it once appeared. The relationship between God and Israel was always very real, but Israel’s vision of God was blurred by the same fallenness that had afflicted all humanity.

This is why Jesus came: not simply to die but also to live, to teach, to correct Israel’s—and humanity’s—vision, to make it clear once and for all who God is and what God intends.

Jesus isn’t God’s softer side. He isn’t God in a merciful mood. This lover of enemies, friend of women, companion of sinners and violator of fences is God. He is the revelation who God has always been and who God always will be.