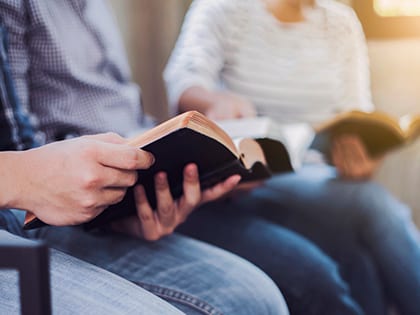 God’s acceptance is not based on how well we live the Christian life, but on Christ’s finished work on the cross.

In Galatians 3, Paul compares the salvation process to the experience of Abraham: “… just like Abraham who believed God, and it was credited to him for righteousness” (v. 6). He quotes Genesis 15:6, where Scripture says that Abraham “believed the Lord, and he credited it to him as righteousness.”

If you go back to read Genesis 15, you’ll see that God made a staggering promise to Abraham: From him would come a great nation that would provide forgiveness and salvation for the world. The promise was staggering because when God made it, Abraham was old and childless.

The word “credited” (In Genesis 15:6 and Galatians 3:6) is logizomai in Greek, and it means “counted.” When you write a check, the check is not money, but it is counted as money. The other person can go to the bank and rightfully say, “I have this piece of paper; give me this amount of money.”

2. Abraham’s ‘Dead,’ Sterile Body was given the ability to reproduce.

When God promised Abraham a great nation in Genesis 15, Abraham was an octogenarian. Married to another octogenarian. With no kids. By that point, most people have given up on trying to have kids.

But even though God’s promise defied everything Abraham felt to be true, he believed God. And when he did, God gave his old, dead, sterile body the ability to reproduce.

In the same way, when we believe Jesus’ statement from the cross that “it is finished,” even though we may feel condemned and spiritually lifeless, God imparts resurrection life into our old, dead, wretched, sin-sick spiritual hearts.

A few years later, at the ages of 99 and 90, Abraham and his wife Sarah had a son who would father the nation that would bring into the world Jesus, who would provide forgiveness of sins and eternal life for all who believe through his death and resurrection.

From Outreach Magazine  Do You Need a New Perspective on Volunteers?

THE KIND OF SPIRITUAL POWER MOST PEOPLE ARE MISSING

Paul then asks in Galatians 3, What part of this exactly did Abraham accomplish by his own strength? Was it some technique or new way of positive thinking that infused fertility to Abraham’s sterile body?

No. It was all God. All Abraham did was believe what God promised, and he kept believing it.

In fact, Paul points out that when God made the promise to Abraham, he hadn’t even given Israel the Law yet or even initiated the covenant of circumcision. Obedience to the Law can’t be a condition for obtaining the promise—because it wasn’t even around yet. Rather, righteousness and spiritual life are given to all who simply believe the promise of Jesus that “it is finished,” just like he said.

This is the kind of spiritual power many people are missing.

THE POWER FROM THE PAST IS THE POWER FOR THE PRESENT

“It is finished” is not just the way we obtain forgiveness in the past. It is how we gain power in the present, because it releases us from the power of sin. The Galatian “error” was that after they started through faith in the gospel, they thought they would be perfected—or come to maturity—by the power of the flesh, through obedience to certain laws, like circumcision or adherence to dietary restrictions.

For most of us, those are not the same things we turn to. But there are a number of laws we turn to in order to perfect ourselves:

From Outreach Magazine  How We Shape Culture

• Catholics turn to ceremonies and sacraments and believe salvation is faith in Christ plus these things.
• Baptists turn to rules and emphasize external conformity.
• Megachurches are big on life principles and practical applications of faith.
• More liberal churches put emphasis on certain social justice rules, as if the way you become a real Christian is by adopting certain societal agendas.

I could go on. Many times these agendas or practices are good. But when the emphasis is all on what you are to do rather than the power of the Spirit released through faith in gospel, then you’re looking at the Law. And the Law doesn’t make dead men come alive.

When you are struggling in your marriage, you don’t just need to learn new techniques in marriage. The power to really change in marriage comes from the gospel. Learning five new steps to being a more thoughtful husband is not nearly as important as embracing the 10 billion steps Jesus took to you when he died on the cross.

When you are struggling as a parent or your kid is struggling with sin, and you can’t make them love the right things no matter what you say, where do you turn? Do you force them to conform to the laws? No—because you can’t produce righteousness in their hearts through the law. Heart change only comes from the gospel. You need to turn your hope toward the gospel and pray in faith for that power to be released in your life and in the lives of your kids.

When you struggle with sin and you’ve fallen again, you’ve got to look at the finished work of Christ and thank God that his acceptance of you is no longer based on how well you live the Christian life but on Christ’s finished work.