Home Features What Italy Showed Me About the Coronavirus 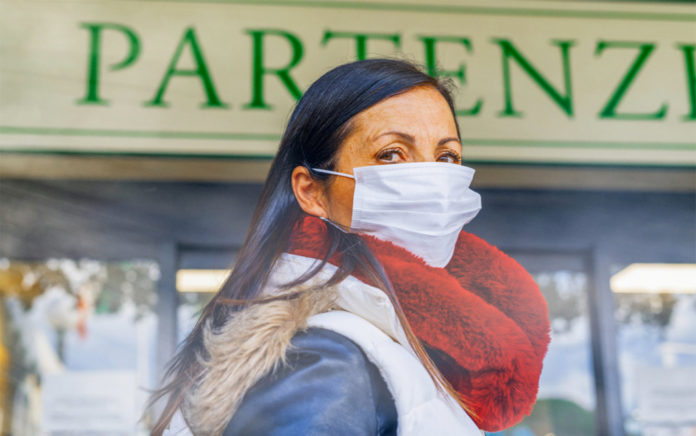 One woman’s story of returning from Italy as the virus began its spread.

Quarantine. My husband and I are quarantined to our home after a 10-day trip to Italy because of Covid-19.

We left for our trip 49 days after the first coronavirus was reported in China. We weren’t afraid. After all, we were from America and only going to Italy. We’d be fine. It’s amazing how powerful hubris can be.

Our trip to Italy was amazing. It was tinged with concern over the virus, but we got to experience Rome, Italian mountainsides and Sorrento. In southern Sorrento, we had three nights at La Minervetta, the most amazing hotel on the Sorrento cliffs with views … views … views. The place was luxurious.

WHEN A CORONAVIRUS OUTBREAK ERUPTS

The blue-green water of the Mediterranean Sea spread between us and Mount Vesuvius across the Bay of Naples. It was hard to imagine that in AD 79 that volcano erupted and buried an entire civilization in ash. Now it seemed the coronavirus was erupting in Italy and covering northern Italy in the ash of disease, fear and death.

There was nothing either civilization could do. Wait and wonder. Nowhere to run. Captured by the flow of destruction.

It was heartbreaking to be among these very kind people and know they were living in the second biggest hotbed of viral outbreak outside China at the time. Every day, the numbers of infected grew by 10%, 30%, 50%. My husband tracked the stats.

Events were shut down. Schools were shuttered. All sporting events were ordered to take place in empty stadiums until April 3; that includes the national football leagues. Fashion week in Milan found designers having their models walk the runway to completely empty rooms. Giorgio Armani urged people to stay home and watch the streamed show.

While we were there, 90% of hotel reservations in Sorrento–8 hours from the quarantined Lombardy region–had been cancelled. Shops that would normally be teeming with tourists were hauntingly silent as salespeople stood at the door looking out into almost empty streets.

Entire cities in northern Italy were locked down. No one getting in or out without permission. Masked armed guards stood at city entrances. Travel bans were set. No one except essential personnel were to travel to these areas.

We were in an unaffected area. Yet we had flown through high-risk Milan the day before the first case was announced. Were we possibly carriers? Had we been exposed?

It’s the news media that has started our demise, people would say. It’s their penchant for sensationalism. They were trying to handle the perception among tourists. We could hear their fear in the blaming.

Yet the statistical charts continued to reveal that rather than a fake news scenario, this virus would move fast through communities. And death would come to the at-risk–the aged, the infirm. It seemed to be mercifully sparing the younger generations. Those 60 and above are most at risk.

We wondered … what will it be like to fly back into the U.S.? Are we putting people in danger? How will people treat us? Will we be forced into quarantine as Israel has done with tourists returning from Italy?

As we said goodbye to Italy, we moved through the airport in Rome. The workers, the passengers … many wore masks. In Rome, we boarded our plane to Amsterdam with no screening. We continued to use our Clorox wipes, wash our hands constantly, and use hand gel. We were vigilant to sanitize all around our seats on the plane and no one looked at us oddly.

In the Dutch airport, we saw fewer masks. Less caution. But when we boarded the plane, the ticket agents asked if we’d been to China in the last 14 days. Then they checked our passports to ensure we were being truthful.

“What would you do if we had been to China?” I asked the Delta Airlines agent. “We would not let you on,” she said. “You would have to find another way home.”

What awaited us in the U.S.?

Thankfully, there was no coughing or sneezing on the plane. But a man one row over wore his mask the entire time.

WHEN A CORONAVIRUS SEEPS IN

We landed in Atlanta and saw a few masked travelers and TSA agents. There were none in Denver.

In Atlanta, I asked why there weren’t any screening protocols (as we had read about in the news). “The CDC was supposed to set something up today, but they didn’t do it,” the TSA agent told me and clicked his tongue.

Tourists from all over the world flowed into the queues for customs. We all shared the same customs terminals as rapidly as we could possibly manage. There was no time for sanitizing.

We had repeatedly read how people who had traveled to Italy had taken the virus to other countries. The outbreak in Italy was affecting the world! We believed there should be great caution exercised and we had read that there would be.

We weren’t asked to fill out a health questionnaire for screening.

From Outreach Magazine  Why Do We Avoid Planting Churches?

We weren’t asked where in Italy we had traveled.

We weren’t asked if we had any symptoms.

We weren’t asked if we had been around anyone with symptoms.

We weren’t screened for fever either with a non-touch device or infrared screening as we had been in Milan and Rome.

No, we don’t. We had brought home no souvenirs to declare.

This was our government’s biggest concern? We saw videos and signs about the dangers of bringing in agricultural products. But we saw NOTHING about bringing in a deadly virus.

We were shocked by how cavalier our borders were regarding this highly contagious and deadly virus. If our country isn’t going to protect people, we thought, we will.

We are in a self-quarantine for 14 days. We do not have any symptoms, by the grace of God. We have asked our doctors if we should be tested. They have said no. We are considered low-risk, but they have thanked us for quarantining ourselves.

We wait to see if symptoms develop. We wait for these 14 days to be over. We wait to see how our government will finally respond to the virus that has now crossed over into our country and is infecting and killing people.

We wait to see how the hubris that led to the lack of caution will finally impact thousands if not millions.

We wait as we read about the virus spreading across our country.

This has just begun. Crucial safeguards that we believed were in place were not in place at the time of our travel on February 29 as we re-entered the country.

The virus is here. And it will move fast.

Because our borders were not secured, our No. 1 defense is in our hands: personal hygiene and concern for the greater good.

We must wash our hands, disinfect our spaces, cough into our elbows. We must care for our coworkers and neighbors enough to isolate ourselves if we are exposed or sick.

Our government is scrambling to catch up, but they will never be as effective as each of us who willingly protects our own borders.

May God have mercy on us.

This article originally appeared on FaithIt.com and is reposted here by permission.