Home Features How Do We Navigate a Digital-Media World With Teenagers? 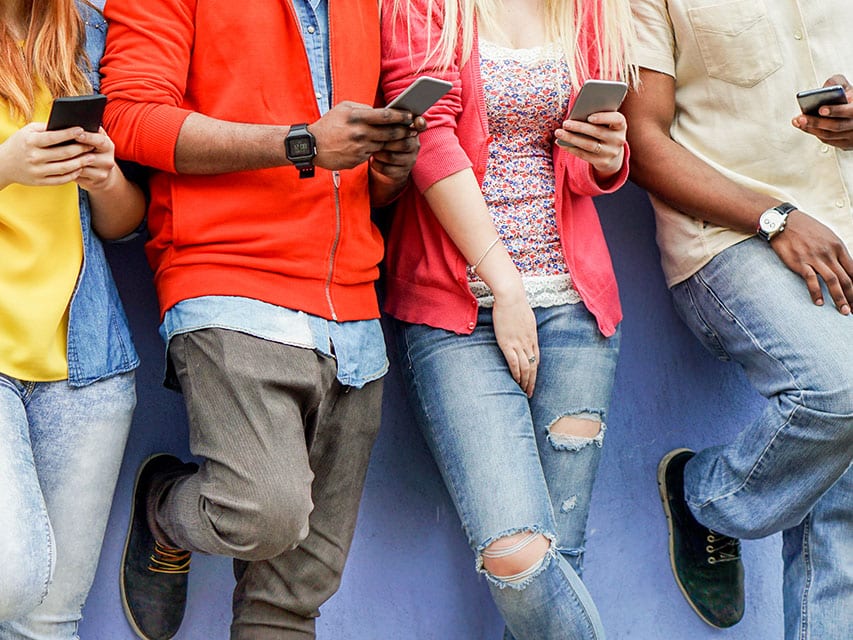 “Together we can forge a hopeful path on which digital media is neither a savior nor an enemy, but a companion.”

“Put that thing down!”

This was Betsy’s first response when I asked a group of moms, “What comes to mind when you hear the phrase ‘social media’?” The room burst out in laughter.

I was listening to parents talk about these concerns as part of a project with the Fuller Youth Institute, because the amount of time young people spend using digital devices seems to be one of the most pressing challenges for parents today.

It feels like young people are tethered to their phones, constantly glancing or full-on staring into a screen. But before we judge kids or insist they “put that thing down,” we need to understand what today’s digital world is like, and what motivates young people to check their devices so frequently.

Welcome to a Whole New World

There is no question that digital media use has exploded among teenagers. According to recent U.S. research findings:

If we could peel back the surface-level reality of these statistics, we also might see a fundamental difference in how young people experience digital media compared with their parents and older generations.

Researchers have referred to today’s adults as “digital immigrants,” whereas young people are “digital natives.” Like most immigrants, we bring luggage from our predigital world, namely some of the expectations we have about why and how people use media.

My grandfather moved to the United States from England when he was just 4 years old, yet he continued to have a hint of an accent from his native country (and a cup of tea every afternoon) until the day he died. In a similar way, we may use digital technology ourselves and feel like it is now “home” in some ways. But in reality, we will never be as fully steeped in digital culture as the generation after us.

Digital media was created and designed to facilitate better, faster collaboration and interaction. When we talked about media in the past, we presupposed a fairly passive type of engagement in which a “mass” audience of people would simply receive words, images and sounds. But now it’s a whole new world, and a social world at that.

This is extremely important to keep in mind when it comes to navigating this world with young people: They don’t experience digital media as being more interactive, as we do. To them, media means interacting.

Like it or not, we can’t remove digital like a stain from young people and get them to think about media and use it the way we do. That’s not the world they live in now, and it’s not the one they’re going to live in as adults. The digital layer of reality affects our thinking, relationships and spirituality.

Parents want to talk about media more with their kids, and many are trying admirably to do so, but aren’t always sure how. It turns out that we are living in a transitional phase in history. This means parents can—and should—have totally new conversations with kids.

The biggest stumbling block for adults tends to be not what we do, but how we think about media. When we fail to understand how young people think about it, our conversations about boundaries, rules and good decisions get lost in translation.

From Outreach Magazine  The Identity Issues That Are Killing Our Leadership

The goal is to have great relationships with our kids. Media will be in the middle of that somehow. Rather than a divider, we want it to be a middle ground—a common ground where families connect.

Take a Trip to the Lunchroom

So why do young people constantly check their phones and other devices? We are often inclined to focus on how young people use media, but it can be helpful for us to turn this equation around and ask: “What perceived needs or desires does this kind of use gratify?”

By asking this “why?” question to identify underlying motivations, we are better able to both understand young people’s media use as well as find outlets that meet these same needs through nontech or low-tech activities.

For example, when many of us were teenagers, we fulfilled our social needs to connect with other young people by talking on the phone (probably one with a curly cord that was mounted to a wall). This same social motivation is driving teenagers to connect today, but different technologies facilitate that hunger.

We’ve found it helpful to think about teenagers’ use of digital media as today’s version of the school lunchroom.

Teenagers have always seemed hypersocial to adults because they are in a stage of life when they begin to form their own identities. The question “Who am I?” plays on a continuous loop, like background music in our subconscious, throughout adolescence. Coming up with a sufficient answer to this question is a complicated and difficult job, and we work on it largely through relationships.

School cafeterias have always been a kind of petri dish within which young people experiment with this “work” of identity formation. To parents and educators, the noon break is about eating lunch. But for teens, it can be the defining moment of the entire day. It provides a space in which they can be themselves, but as people still learning who those selves are, it becomes a social laboratory.

Every lunch is a kid’s opportunity to experiment, observe, tweak the formula a bit and get ready to test out the new version tomorrow. The cafeteria experiment is filled not only with conversation, but also tons of nonverbal communication—students’ seating locations, their clothing styles, what and how they eat, and how they interact with each other.

In much the same way, being an active participant in social media is not limited to verbal interaction or one-on-one conversations. Parents often underappreciate how a quick scroll through social media for a teen can be like scanning the lunchroom. Young people have very sophisticated ways of conveying social cues with digital media that we as adults struggle to recognize or grasp.

Many of these cues are nonverbal because young people lack the capacity to express what they’re thinking and feeling in words, and crave more relatively unsupervised space to interact with their peers. These nonverbal messages also allow them to efficiently send the equivalent of a thousand words with one image.

That’s why phenomena like emoji and photo sharing catch on like wildfire (and continually evolve). This is also why monitoring the “economy” of likes, shares, votes and views is so incredibly important for young people. And the irony of the lunchroom analogy is that often, today’s teenagers are also using digital social media in their actual school lunchrooms, navigating all these layers all at once.

We who are digital immigrants still have some sense of what researchers have called “media rituals.” We remember when we could only access and use certain media in designated times and places: a radio in the car or bedroom every morning, the evening news on TV in the family room and a Friday night at the movies.

What many parents call “screen time” today is an attempt to establish that same kind of consistency and sense of routine with digital media. But once your child comes to own or access devices regularly, this is extremely difficult. We could limit screen time when it was just TV, a game system or even a video on an iPad, but once kids start texting and doing homework on a computer, screen time becomes more diffuse and omnipresent.

Digital media doesn’t just lack a kind of ritualistic stability; it often seems to go a step further and interrupt our other daily rhythms and feeling of togetherness as families. So families need to reimagine what family time looks like, and come to terms with the surprising ways that technology both helps our bonding as well as hinders it.

Families can begin by carving out specific times and spaces that are heavy-tech and low-tech. One mom we spoke with told us that something as simple as buying a new table had helped alleviate some of her media-related stress with her son: “We got this table that’s in the family room for our youngest, and all his devices have to be on the table. That’s where he has to use them.”

This simple change turned a lot of frustrated “nos” into clear expectations. As digital media continues to evolve, the most important thing to focus on is consistent consensus about what our family’s expectations are with regard to when, where and how we use and interact through our various devices.

You’ve Got a Friend in Media

Researchers have found that when asked about their happiest memories involving family, a lot of kids describe times shared that somehow involved media. This is especially true of new media, when young people got to be the family’s resident expert and explain something to their parents for a change.

Creative parents are diving into kids’ technology as a way of entering their world, whether that means playing video games, getting better at text slang or sharing funny memes. We will probably embarrass ourselves in the process, but it is meaningful and endearing when we try. And it helps build the relationships that we are hoping for in the first place, using technology as a tool that binds rather than divides.

If we’re being totally honest, one of our biggest worries as adults is that the young people we love will end up using digital media a lot like we do, in some of the ways that bother us. They’ll feel perpetually interrupted, struggle to be present and attentive, wish they made more time to enjoy things like a good book or coffee with a friend without constantly checking their phones, or feel unsatisfied with their lives compared to what they see in their social media feeds.

This is where young people can help us make this journey a two-way street. They have a lot to teach us if we are willing to listen, watch and meet them in the world in which they are natural-born residents. Our investment in walking alongside them as they learn to use digital media can pay dividends by helping us relearn, or even unlearn, how we have grown accustomed to using it ourselves.

Together we can forge a hopeful path on which digital media is neither a savior nor an enemy, but a companion.

Art Bamford is a research fellow at the Center for Media, Religion, and Culture at University of Colorado-Boulder, where he is currently pursuing a Ph.D. in Media Studies.