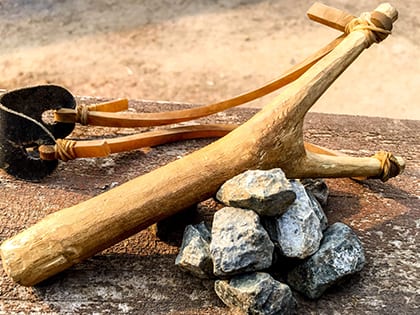 “You and I can never bring down giants through our own efforts. It is, and always will be, Jesus who brings freedom.”

It’s a timeless underdog story: David vs. Goliath. The shepherd boy from Israel who felled the Philistine giant with one well-aimed stone.

If you grew up with even a little proximity to church, it’s likely you know this story. It’s also likely that at some time or another, you—like me—tried to muster up courage, grab five smooth stones, hone your slingshot accuracy and fell your own giant. Perhaps, down the road, you’ve found yourself fighting the same giant at age 40 as you were at age 14. Sound familiar?

Along the way, it becomes apparent that we don’t have the power to defeat our Goliaths on our own. Yet, we get used to living with the daily taunts, diminished in the shadow of a giant lording over us. These giants not only rob us of our freedom, they rob God of the glory he deserves in our lives. It’s not his plan for us to live demoralized and diminished; he proved that by earning victory for us in Jesus’ death on the cross. How can we walk in the freedom he’s won for us, so our lives are full and free to magnify his great name?

First, it’s imperative we recognize that there are still giants in the valley. Maybe fear, anxiety or depression is paralyzing you. Maybe you’re haunted by someone’s rejection, the need for approval or an addiction. Or, perhaps, the subtler giant of comfort compels you to live for something less than God’s best. Whatever giant you’re facing, the path to victory starts with naming it.

But if we stop there, it’s possible we can become so consumed with talking about our giant that we begin to worship the giant itself. Unknowingly, we lose sight of God while Goliath dominates our focus. So, we must lift our eyes back up to the One who is all-powerful, all-knowing and eternally victorious.

If you’re having trouble lifting your eyes, lift up a song of praise. Create a soundtrack of worship—a literal playlist—to remind your soul who God is. Read the Psalms. Wield the weapon of worship against anything telling you it’s greater than your God. As you sing, your giant will be right-sized in view of a limitless God.

One last thing. And it’s important. If you truly want to see victory over the giants in your life, you need to understand your dependency on the all-sufficiency of Jesus Christ. Here’s the big twist in the David vs. Goliath story: You and I are not David. Jesus is David in the story. That means he’s already defeated every Goliath looming in the valley of our lives.

You and I can never bring down giants through our own courage, willpower or efforts. It is, and always will be, Jesus who brings freedom. Depend on him, trust his victory and walk in alignment with his finished work. Focus less on the enemies who are surrounding you and more on the fact that he is there with you. Move forward into the victory he has for you—and watch as one by one the giants in your life fall. For our freedom and his glory, they must.

Louie Giglio is the pastor of Passion City Church in Atlanta and the founder of the Passion movement, which exists to call a generation to leverage their lives for the fame of Jesus. His latest book is Goliath Must Fall: Winning the Battle Against Your Giants.