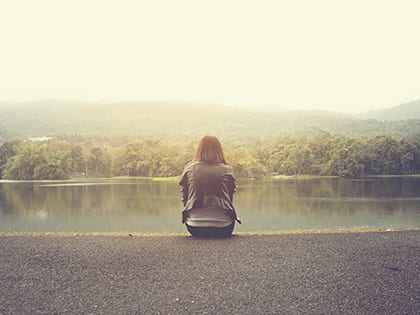 “Because of God’s selfless love for us, each of us can make this declaration of freedom: ‘I am loved.'”

Every parent knows the feeling. When you hold your child for the first time, your whole understanding of love changes. You’re ready to sacrifice everything, and sometimes you do: sleep, freedom, your savings account. In a wonderful irony, the more a parent sacrifices, the more he or she loves.

It’s this indescribable feeling of love that makes the thought of losing a child unbearable. Linda White has lived with this nightmare for the past thirty years. In 1986, her daughter, Cathy, was a twenty-six-year-old mother pregnant with her second child. Cathy stopped to offer help to two fifteen-year-old boys whose car had quit on them. The boys accepted her offer of a ride. Then they raped her and shot her four times, leaving her body in a field near a dirt road.

Linda was overcome with grief and anger. “I didn’t see [the boys] as humans at that time,” she recalls. “I was pleased when they both were sentenced to long terms in prison.” But then she adds, “I feel different today.” Somehow Linda’s grief was transformed into a kind of love that counterfeit worldviews are at a loss to explain, a love so profound that Linda forgave her daughter’s killers and, in the process, brought hope to thousands.

It took a long time. At first, Linda and her husband joined victim-support groups. But they found scant comfort there. “Nobody moved, everyone stayed the same,” Linda told a reporter for the BBC. “I didn’t want to be five years down the road and be the way they were—full of bitterness.” Finally, Linda asked to meet in person with her daughter’s murderers. The prison allowed her and her eighteen-year-old granddaughter, Ami, to meet with one of the two young men. The encounter was filmed and used in a documentary called Meeting with a Killer.

The murderer’s name is Gary Brown. Linda was astonished at how young and vulnerable he looked. She learned that he had been abused and neglected early in life. In their meeting, he expressed total remorse and offered no excuses for his crimes. She describes the encounter as “incredibly healing.”

During the meeting, Linda showed Gary photos of her daughter, Cathy. Cathy’s daughter, Ami, talked about her struggles growing up without her mother. They told Gary, according to Mark Obbie of Slate, “that his resolve to live a better life is the only atonement he can make and all that they ask of him.”

How could Linda go through with such an excruciating meeting? She said simply, “I strongly believe that most of my journey over the last 23 years has been through grace. Otherwise, I have no explanation for it.”

Gary Brown was released from prison in 2010, having served twenty-three years of a fifty-four-year sentence. Linda said he became a remarkably different person, “proof that young people, even those who have done horrible things, can be transformed.”

Gary changed, but Linda did too. She declared freedom from the idea viruses that chained her to hate. Rather than hate, she chose to love. She became an advocate of what is called restorative justice, which helps victims find peace and gives offenders a chance to try to make things right. Linda’s story illustrates how a Christian worldview transforms love itself, bringing good into the world even through a dark story of personal loss. How it does this is one of the most remarkable stories ever told.

Be Informed: “Agape” as the Christian Worldview Response to Feeling Unloved and Alone

Here are two insights, based on who the Bible reveals God to be, under which we can take shelter when we feel unloved and alone. These insights help us see that we are loved and that deep, unconditional love exists and we can have it.

From Outreach Magazine  Thoughts of a Depressed Pastor: 4 Steps to Escaping Depression

Try to put yourself in the place of Linda White. Her reaching out to her daughter’s murderer seems miraculous. That’s because it is. A Christian worldview supernaturally transforms love by revealing two things about God that we could not grasp on our own.

First, God is a person, not a force. If God were a force, then “he” would be an “it.” An “it” cannot love you. But God cares personally. His love, Deuteronomy tells us, is like a wall that surrounds us so we can dwell in safety (see Deut. 33:12). And it never stops. The prophet Jeremiah affirmed this message from God: “I have loved you with an everlasting love” (Jer. 31:3).

Second, God expresses his love through his presence. Unlike other ancient religions, the temple of God’s chosen people contained no statue of God because God himself was present. In fact, the Christian worldview teaches he is present everywhere. Saint Paul told a group of religious scholars in Athens that the living God does not live in temples made with human hands. We don’t give life to him; he gives life to us (see Acts 17:24–25).

God is personal. God is present. On these two pillars rests a deep kind of love that is hard to express in a day when we employ the word love to mean both our love of a favorite television show or a steak dinner and the love we have for our family and best friends. But when Jesus revealed what kind of love God expresses, the world changed forever.

Unlike the language we use today, the ancient language of Koine (COIN-ay) Greek, the dialect that was used to write down Jesus’s words, specifies different types of love by giving each type its own word. Love of family is philos (think of Philadelphia, the city of brotherly love). The word for romantic or sexual love is eros. But the Bible uses a third, less common word to describe the kind of love that comes from God. It’s the word agape (ah-GAHP-ay). Agape love is a selfless, self-giving love.

Everyone knows that God loved the world enough to give his only Son, as John 3:16 says. It’s the most famous verse in the Bible. But through his letters, Saint Paul clarified what it looks like for us to love that way. He wrote, “Love [agape] is patient and kind; love [agape] does not envy or boast; it is not arrogant or rude…. Love [agape] bears all things, believes all things, hopes all things, endures all things” (1 Cor. 13:4–5, 7). Agape love comes from God, Paul said, and God is the one who pours it into our hearts by his Holy Spirit (see Rom. 5:5).

Agape love is selfless love. As we receive it from God and give it to others, our hearts’ immune system grows strong against idea viruses that make us feel unloved and unloving.

How Jesus Defeats Idea Viruses That Leave Us Feeling Unloved

Linda White did not invest her love for her murdered daughter in an ongoing effort to heap greater punishment on the murderers. Rather, she used it to forgive. It’s hard to explain this in purely human terms. In fact, the dominant, counterfeit worldviews of our day move us further from love rather than closer to it.

Consider the way various worldviews wage the secret battle of ideas about love. Secularism, by teaching that only the material world exists, turns love into slang for the human instinct to protect family members. Secularism also attempts to explain why our need for love is so strong by equating it with sexual desire. When someone says, “Don’t impose your morality on me” or “Repressing your sexual desire is dangerous,” he or she has been influenced by secular idea viruses.

Other worldviews offer their own confused messages about love. Marxism says love can’t exist until society’s institutions are overthrown through revolution. Postmodernism denies that such a thing as love can exist. New spirituality says love comes only through tapping into the universe’s power. To Islam, obedience—rather than being loved by our Creator and Redeemer and loving others—lies at the center of our religious duty.

Think of all the idea viruses these worldviews produce:

God does not love you; he’s not even real.
Love doesn’t mean anything; it’s all about sexual urges.
Life is survival of the fittest; focus on your own needs.
It’s dangerous to repress your sexual desires; we’re all just animals anyway.
How can it be wrong if it feels so right?
Only you know what is best for you.

The Christian worldview stands in contrast to these views because of Jesus. He is proof that God is personal and present; through him, God became flesh and lived among us (see John 1:14). You want to know where love is? He’s right here. Eating. Drinking. Walking. Weeping. Conversing. Healing. Other gods rule through fear, taking the lives of others. Jesus overcame fear and gave his own life. There is no other God like this.

The selfless love Jesus taught is bigger than we could come up with on our own. Through traumatic life experiences, I’ve learned three things about selfless love. First, it meets the deep need for intimacy. Second, it grows through giving rather than getting.

And finally, it tames self-love.

It was a marriage-counseling session, and it wasn’t going well. I could barely contain my panic. As the therapist asked us to complete exercises such as writing down our top five emotional needs, I tried to humor him. “Respect. Sense of purpose,” I wrote. “Peace. Feeling needed.”

Then I hesitated. Finally, I wrote “Intimacy.” What I really wanted to write was “Sex,” but the word intimacy seemed more, shall we say, appropriate.

When we were finished, the counselor asked me to read my list aloud. I did. There was a long pause. “Do you need to be married to meet these needs?” he queried.

I was quite sure I did, knowing what I meant by intimacy.

“Which of these needs are you turning to your wife to meet rather than to God?”

The word intimacy stared back at me, burning a hole in the protective layer shielding my deepest doubts. “There is no way God can meet my need for intimacy,” I said.

“Because …” I said, pausing in the hope that a good rationale would come to mind. It didn’t. “Okay, what about sex? How am I supposed to experience intimacy with … God? That sounds weird.”