Home Features No, Christians Don’t See the Eclipse as a Sign of the Apocalypse 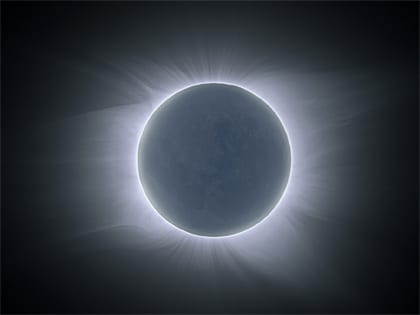 “For those few spreading fear about an eclipse, you’re embarrassing Christians, not representing Christ.”

Hello Christian leads with the headline, “Greg Laurie Explains the Prophetic Significance of the Solar Eclipse and North Korea.”

Well, you can tell from the title of my article that I think seeing the eclipse as a “sign” is silly and unhelpful to the reputation of Christians. So, Greg Laurie, why in the world are you talking about the prophetic significance of the solar eclipse? That’s silly.

Well, here’s what he actually said, quoted from Hello Christian, which quotes from the Christian Post:

“For me personally, I am not attaching any great significance to a solar eclipse,” he said. “There are many signs that Jesus told us to look for that would alert us to the fact that His coming is near,” he told the Christian Post. “The fact is, those signs are all around us. Only a fool would ignore the writing on the wall. As far as the solar eclipse goes, I personally don’t attach any great significance to that in particular.”

So, get past the click-bait headline from Hello Christian, and Laurie is right—so let’s heed his counsel.

Contrary to the hyped-up news stories you might have seen concerning how Christians are reacting to the eclipse, there is no concern among any Christian leaders I know that the eclipse is a sign of an immediate Armageddon. And it certainly isn’t anything for us to fear.

The media often attempts to find fringe people who claim to be Christian but often have little more platform than a badly arranged blog and a few Twitter followers to “represent” Christianity to the masses, via an often-hyperbolized segment designed to make Christians look stupid.

We’ve seen this before: the blood moons, planets aligning, 2012 and other events that are adopted as signs to serve a political point or send a message of God’s impending judgment. Often, the message isn’t directly contradictory to Scripture (judgment is real), but the method of communicating and proving it (i.e., God’s judgment is on America because of X event) becomes harmful, embarrassing Christians every time it is proved to be untrue.

Here are a few thoughts to address this:

1. For those few spreading fear about an eclipse, you’re embarrassing Christians, not representing Christ.

What I would say to those few fringe Christians who are saying such things is that you do nothing but harm the reputation of Jesus in the world around you. The media pounces and hyperbolizes your fringe perspective into being normative, and it causes reproach upon Jesus and his church.

Your complex machinations about how the eclipse or current events are proof the world will end in that moment distracts people from the simple truth that they are sinners and apart from Christ they are lost and without hope.

To Christians who draw these conclusions: Stop. You’re making yourself and us look foolish the day after the eclipse. It gives the world more opportunity to roll their eyes and assume your foolishness is our foolishness.

But let’s be honest. There are not many people doing this, so let me go to the second issue.

2. To journalists who seek to highlight Christians who see the eclipse as a sign of the end: It’s not honest reporting.

It’s disingenuous and dishonest. I don’t see any of these news sources going around looking for the fringe ideas of Hindus or Muslims—but they do so for Christians.

We have fringe people who ascribe cult-like significance to normal astrological events, but they do not represent mainstream and normative Christianity.

No one in the mainstream sees a sign of the eclipse in America as certainty that the world is ending on Monday.

3. For anyone thinking an American-viewed eclipse is a sign of the end, how American-centric can you be?

In reality, there is an eclipse somewhere on the Earth at least once every 18 months—the fact that it is happening in St. Louis does not make it an eschatological sign. When a Christian thinks that an eclipse in the U.S. is the sign of the end, they become both America-centric and biblically unsound.

Calling an eclipse a sign is like calling a full moon a sign—the eclipse is just less common. It’s predictable, but it’s less common. Just because something is less common doesn’t automatically mean you can adopt it as a sign to serve a specific agenda or message.

4. Focusing on an eclipse distracts us from focusing on Christ.

The deeper problem is that people read their own political agenda and experiences into the Scriptures, then incorrectly search for exterior proof of their hermeneutically unsound opinions, finally proceeding to scream the perception of truth and its proof from the rooftops. People do this instead of letting Christ’s agenda for his kingdom read and speak in to them.

When you twist the Bible to match current events, you’re saying our own experiences right here and now are more important than Jesus’ simple gospel of his already accomplished work on the cross, for your sins and in your place.

The truth is this: Christians have always believed that Jesus is going to return—and might return at any moment. (We call that the imminent return of Christ.) The Bible does give us clarity in Matthew 24 that celestial signs will happen. But when the cumulative event happens, it will be undeniable. Until then, Jesus tells us: “Concerning that day or that hour, no one knows, not even the angels in heaven, nor the Son, but only the Father. Be on guard, keep awake. For you do not know when the time will come” (Mark 13:32-33).

Our job is to be awake, to repent and believe the gospel, to love our friends and neighbors, and to tell others about Jesus. We don’t need an eclipse to do that.

If you want a sign of God’s judgment, don’t look to the sky. We only have to look at ourselves and we can see it—when we can’t call out evil and when right is called wrong.

That’s a bigger issue than an eclipse.

Today, some people are going to make believing in Jesus look silly again, and some in the media is ready to help them do that.

The eclipse IS a sign—a sign of the finely tuned universe that points to an active Creator.

Comets come and go. Eclipses come and go. And Jesus will come … at a time of his choosing, unrelated to these things. So rather than seeing signs in the eclipse, we might follow 2 Peter 3:11-12:

Since all these things are to be dissolved in this way, it is clear what sort of people you should be in holy conduct and godliness as you wait for the day of God and hasten its coming. Because of that day, the heavens will be dissolved with fire and the elements will melt with heat.

(Hint: You will know when the heavens are dissolved. It looks different than an eclipse.)

But, the point here is how we live, and what sort of people we should be in the meantime. You will know when the end comes—trust me. Until then, let’s make much of Jesus.