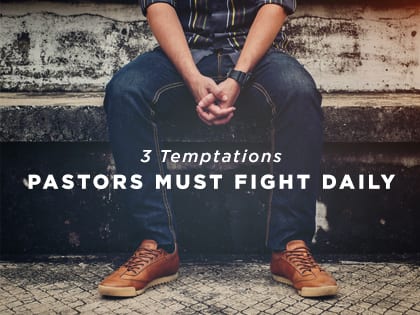 John Owen strongly challenged: “Be killing sin or sin will be killing you.”

Overcoming temptation is active, not passive. Defeating sin requires grace-driven effort. D.A. Carson said, “Apart from grace-driven effort, people do not gravitate toward godliness.” With that in mind, here are three temptations pastors and leaders must fight against daily.

1. The temptation to speak before listening.

Leaders usually have a lot to say. They are driven by convictions and an internal sense of mission, which can easily lead to speaking before listening. But wise leaders listen before speaking. Wise leaders gather information before giving direction. The apostle James reminds us:

My dearly loved brothers, understand this: Everyone must be quick to hear, slow to speak, and slow to anger. (James 1:19)

2. The temptation to act before praying.

Leaders often do not need extrinsic motivation but are intrinsically motivated to give direction and make things happen. Leaders are driven. They wake up each day ready to attack problems from the previous day or to discover new ones to solve, which, without grace-driven discipline, can result in action before prayer and operating in one’s own strength.

Before Nehemiah acted and gathered people to rebuild the broken wall in Jerusalem, he prayed, fasted and wept (Neh. 1:4). Leaders must heed the words of the apostle Paul:

3. The temptation to lead before following.

Leaders lead. They rally people around a direction and move them toward it. But Christian leaders must ensure they are first following. Christian leaders are first followers. If a leader leads without following Christ, the leader will lead people in a wrong direction or will lead people for the wrong reasons. Follow first. Then lead. When leaders do, they can say as the apostle Paul said:

From Outreach Magazine  Finding the Courage to Repent of Sin