Home Features 20 Relics of Churches Past 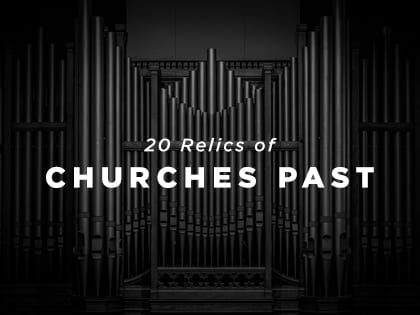 “The question I asked was basic: ‘What did you have or do in your church 10 years ago that you don’t have or do today?'”

This article will get me in trouble.

It began with a simple and informal poll on social media, followed by several direct conversations. The question I asked was basic: “What did you have or do in your church 10 years ago that you don’t have or do today?”

The top 20 responses were—for me, at least—a fascinating mix of the expected and the surprises. They are ranked in order of frequency.

A discussion of this issue generated much banter and controversy from an article I wrote several months ago. But the respondents told us it clearly was a practice falling out of favor.

Ten years ago, church members expected the males on the platform to wear a suit and tie. Casual dress is now the norm in most churches.

This instrument was a standard in many churches 10 years ago. It is now unusual to see an organ still played in worship services.

The digital world has come to churches. Most church members are fine receiving information digitally today.

Many churches decided to limit the amount of time for business meetings because they became a platform for the most negative and contentious members. One church leader called it their “monthly fistfight.”

From Outreach Magazine  We Are the ‘Called Out’ Ones

7. The Name “Sunday School” for the Groups in the Church

As the traditional name has fallen out of favor, it has been replaced with community groups, life groups, home groups and many other names typically ending in “groups.”

Many churches have moved from choirs to praise teams and instrumentalists.

I didn’t see this one coming. The parlor is a room for special occasions, such as a reception or a bride’s dressing room. One church leader called it “the most unused sacred cow in our church.”

Uninvited guests are no longer as welcome in homes as they once were. Several leaders told us the home visitation program did more harm than good.

Hymnals have been replaced with projected words on a screen by many churches.

Indeed, many churches in the past had paid cooks on staff.

Today, most churches do fairly extensive background checks before they allow someone to work in the children’s ministry.

In the past, many churches determined most of their entire schedule by programs resourced by denominations and other providers. The programs drove the ministries and the schedule.

The big pulpit has been replaced with smaller pulpits or stands.

This item was another one that caught me by surprise. But as I reflect on the many churches I visit, I see why it was a common response.

Many churches have disbanded their food pantries and, instead, contribute to a community food bank. The local church leaders simply did not have the expertise to discern if needs were real.

This one was another surprise to me, because I have been in very few KJV churches the past 25 years.

Again, I had not expected this response, but it does make sense. If someone wants to meet with a pastor or other staff member, he or she is likely to make an appointment rather than drop by during prescribed office hours.

Some churches have done away with them altogether.

Thanks to those who participated in this survey. And now … let the discussion begin. What other “relics” do you no longer see in the church today?

Thom S. Rainer serves as president and CEO of LifeWay Christian Resources. Dr. Rainer can be found on Twitter (@ThomRainer) and at Facebook.com/Thom.S.Rainer. This article was originally published at ThomRainer.com on June 14, 2017.