Home Features 3 Signs of a Pastor Who Lacks Integrity 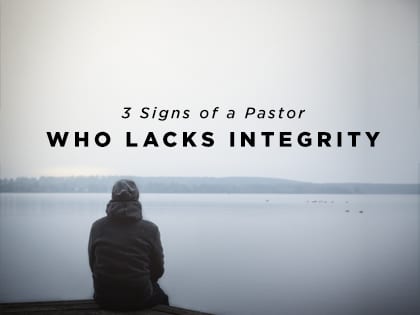 “Integrity. It is a powerful word. It is used to describe people who who live honorably and humbly.”

Integrity. It is a powerful word. It is used to describe people whose private lives match their public lives, whose actions match their words, who live honorably and humbly.

Rightfully so, we long for our church leaders to be filled with integrity. For more than 20 years, people have used the Perceived Leader Integrity Scale as an instrument to measure how people view their leader’s integrity.

The questions in the instrument are designed to highlight what a lack of integrity looks like in the life of a leader. In the instrument, people respond, on a Likert scale, to statements like: “My supervisor deliberately fuels conflicts among employees,” “My supervisor would blame me for his/her own mistakes” and “My supervisor avoids coaching me because he/she wants me to fail.”

Here are three indicators of integrity lapses in leadership:

In life and leadership, there are people who create chaos wherever they go. Unhealthy leaders enjoy creating conflict and drama because it keeps people guessing and relying on them. It takes a lack of integrity to pursue chaos in order to make yourself feel necessary.

2. Leaders without integrity shift blame to others.

Leaders with integrity take responsibility for their team, even their team’s struggles and mistakes. Leaders without integrity continually look to shift blame to others—even to those they lead—without providing coaching or without replacing team members.

3. Leaders without integrity avoid coaching out of fear.

What are some other indicators of a lack of integrity in leadership, especially in the church?

For a comprehensive discussion on leadership and integrity, look out for the September/October 2017 issue of Outreach magazine, releasing in August.