Home Features What It Means to Be a ‘Peculiar People’ 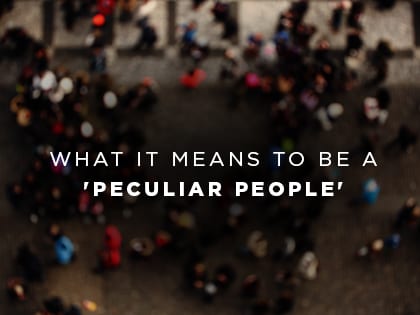 “Long before this predicament, this issue of our chasing something that could never be caught, God had in mind a solution.”

But you are a chosen generation, a royal priesthood, a holy nation, a peculiar people … It is for you now to demonstrate the goodness of him who has called you out of darkness into his amazing light. (1 Peter 2:9,10)

Christ-followers today are in a quandary. We have allowed ourselves to be caught up in a “me too” tailspin in which we devote our attention, our energies, our money, our very lives to fitting in with the world around us, even as we are left unfulfilled by the pursuit time and again.

There in the tailspin, we fall prey to the beliefs that if we can just get that role at work, that leg up on the competition, that admission of wrongdoing from the person who harmed us, that coveted car or primo-neighborhood house, that “in” with a certain influencer, that thing—whatever it is—then (and only then) will our search be concluded. Then, we will be satisfied.

At last, we will be fulfilled.

In our quiet moments of solitude, rare though they are, we suspect there might just be another path to the deep-seated satisfaction we seek. But it’s only a suspicion—we’re not entirely sure the alternate path will pan out. And so we plow ahead, heads down, hearts racing, hair pretty much on fire, climbing and clawing, declaring and demanding, refinancing and remodeling, determined to get there—wherever “there” happens to be this time.

Soon enough, we’re contorting ourselves once again in a futile attempt to scratch the soulish itch that still we cannot reach.

We’re hardly the first culture to wallow in this wearisome, demoralizing mess. Down through the ages, in every culture and era the world has ever known, our temptation in this life has been to see how much we can get, and also how much we can get away with.

From Outreach Magazine  Preaching to Ourselves

This two-pronged pull is what motivated the world’s most powerful governments to fight for more power still. It is what spurred on the slave trade—in ancient Egypt, in the Roman Empire and in North America alike. It is what has been behind every war that’s ever been waged around the globe. It should come as no surprise that when the human heart is itchy, entire people groups live itchy, too. Is there any relief to be found?

Long before this predicament presented itself, this issue of our chasing something that could never be caught, God had in mind a solution—a way that would lead us to long-sought satisfaction, a way that would get that annoying itch scratched.

He would rally a people to himself and ask them to live “set-apart” lives. He would declare them beloved sons and daughters—whole, holy, handpicked. He would empower them with his Spirit, equipping them to live lives of impact and patience and grace.

He would plant a craving for divine light in their hearts, which defeats darkness in all its forms. He would give them a mission to change the world with these traits and would accompany them each step of the way, along the path he himself said he’d make straight. A “peculiar people”—that’s what he’d call them.

By definition, ones who don’t fit in.

These are my shaping thoughts for a new book I’m planning to write soon. The working title is Peculiar: Embracing the Oddities of a Christ-Oriented Life.

I would love to hear your thoughts and ideas.

Brady Boyd, an Outreach magazine consulting editor, is the senior pastor at New Life Church in Colorado Springs, Colorado, and the author of several books. This post was originally published on BradyBoyd.org.