Home Features The Selfie Culture: Who Are We Worshipping? 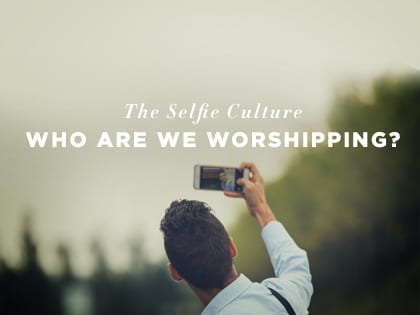 “It appears people have lost the ability to appreciate the world around them without inserting themselves in it.”

My wife, Kathleen, and I are filming in Germany for a Museum of the Bible exhibit that honors the 500th anniversary of the Protestant Reformation. We arrived a few days early to do some sightseeing around Berlin and noticed that “selfie culture” is as big in Europe as it is in the United States.

I’ve been thinking a lot about selfies lately, because I was on a plane recently, sitting next to a 20-something woman who took selfies the entire three-hour flight. She sat next to the window and experimented with lighting by raising and lowering the shade, then fixed her hair different ways and tried multiple angles. I kid you not—by the end of the flight she must have taken 400 shots of herself on her phone.

Back to Berlin, I saw a man almost get hit by a car, a woman nearly fall into a canal, and a couple trip over a sidewalk guardrail—all while taking selfies.

While seeing people taking selfies in front of museum artworks, I also read that museum curators are reporting that people are more interested in capturing themselves in front of great works of art than viewing the art itself.

Teen Vogue magazine reports that the average millennial devotes about one hour of every week to selfies—shooting them, editing them, retouching them.

“In 2015, the social scientists at Luster Premium White, a teeth-whitening brand, calculated that at their current selfie rate, your average millennial will take up to 25,700 selfies in a lifetime. Considering that the average lifespan is only around 27,375 days, that amounts to taking nearly one selfie per day, no small feat when subtracting all the years that people are too young or too old to operate a camera phone.”

But there’s so much more. According to the advertising magazine Adweek:

I’m not sure what to make of all this, except that there’s a pretty powerful relationship between technology and narcissism. Or maybe narcissism has always been around and now we have new tools for expressing it.

So what do you think about the selfie phenomenon? It appears people have lost the ability to appreciate the world around them without inserting themselves in it.

Have the idols we worship become ourselves?