Home Features ‘Move in Her Direction’: A Simple but Powerful Lesson on Biblical Reconciliation 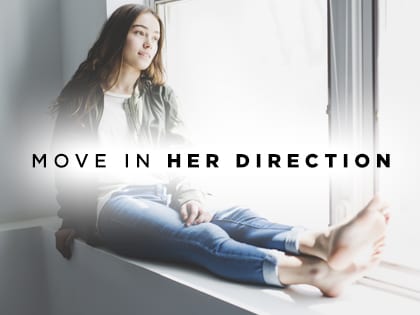 “It’s a small change that yields amazing results. Over the next seven days, try it and see what happens.”

I was sitting on the couch in our living room, venting my frustration to the Lord about my teenage daughter’s attitude. I was at a loss. Nothing seemed to be working. Our relationship had gone off the rails months before, and I could not figure out how to get us back on track. Maybe you’ve felt this before. On top of this, I’m a pastor, and we’re supposed to know how to figure this stuff out. I didn’t.

Over the next few months I practiced “moving is her direction,” the discipline of relational direction. I just moved.

Before, I just sat. I sat in my frustration. In isolation. In distance. In resentment. In withdrawal. It was easy. Do nothing. Unfortunately, this is the default setting for most of us. Do nothing and things will stay the way they are, or even get worse!

“Move in her direction.”

I started moving in her direction. When she walked through the door, I perked up and moved toward her. If she was carrying something, I asked if I could help. It is all small stuff. Nothing big. Nothing that would affect the earth’s orbit. Just little directional adjustments.

And, in a short time, I began to see a difference. She started to react more positively toward me. Started to open up more to me. Relaxed around me. Even moved toward me! Go figure. And, this has worked in all the other relationships in my life, as well.

From Outreach Magazine  Data Tells a Story ... Why Churches Should Track Everything

It makes sense. If communication is 7 percent verbal and 93 percent nonverbal (which consists of 55 percent body language and 38 percent tone), then these small changes in body language and proximity really matter. People will respond differently if we are moving in their direction in a friendly way.

It’s a small change that yields amazing results. Try it. Over the next seven days, move toward someone you’d like to be closer to and see what happens. Husbands. Wives. Sons. Daughters. Brothers. Sisters. Bosses. Co-workers. Fellow students. Teachers.

“Move in their direction.”

Thus, Jesus’ message of the kingdom of heaven is not just about an eternal destination, but an overall life direction. I am constantly making small adjustments to move in his direction. Move with him in what he’s doing. Move toward others with his heart. Move out of comfort into faith. Move in his direction. Simple. Powerful.

“Move in his direction.”

What are some practical ways you can move in the direction of those you love?

I asked my daughter to write what she felt during this time. I thought that it might be encouraging for those struggling with their teens in the “alien abduction” phase that many of them go through. Below is her response. It’s real and raw. The way real relationships are, in reality.

“As I think back on this time period of our relationship, I realized exactly where this change occurred. I would walk in the front door and he would stand up from his seat on the couch and come over to hug me. I remember thinking to myself, Why won’t he just let me walk by? Why does he have to move or say something, or even look at me?

From Outreach Magazine  A Divine Conspiracy in the Same Direction

“I found myself sitting in quite a bit of frustration because I knew the action of my dad getting up to give me a hug shouldn’t bother me in the way that it did. I would walk by him in the kitchen and he would turn around and look at me, occasionally resting a hand on my shoulder.

“Each time, it sparked a massive amount anger within me. For whatever reason, at this point in my life, I wanted nothing to do with him. I didn’t want him to ask because I didn’t want to tell.

“Nonetheless, he asked and I was stuck sharing details of my life that I had not intended to. I don’t know when my heart softened to his ‘moving.’ Perhaps it was over time. I can’t look back and identify a single point in which I was suddenly OK with sharing, but I noticed that I was engaging in conversations with my dad again. I never realized that we had really stopped talking for a few years until I found myself taken aback by the fact that we were connecting.

“Looking back, I see that our relationship was indeed mended by these simple efforts made on his part. I had to be pried open in order to share my life and this was only accomplished through his relentless endeavors to literally ‘move in my direction.’”

Bob Branch is the founder and pastor of The Springs Community Church in Temecula, California.