Home Features Does Your Church Suffer From ‘Close to the Pastor’ Syndrome? 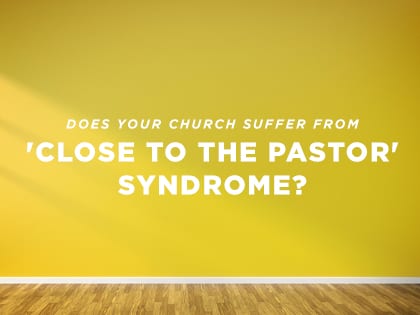 “A wonky dynamic in which long-time members feel they need open, unfettered access to their pastor at all times.”

One of the primary reasons churches under 1,000 fail to grow is their senior pastors have never called into question, then systematically dismantled, the “close to the pastor syndrome.”

The “close to the pastor syndrome” is a wonky dynamic in which long-time members feel that for “the church to feel like church” they need open, unfettered access to their pastor at all times.

Whatever relationship they had when they began attending the church, their expectation is that that same relationship will continue, even if the church recently added 300 new people.

The problem is, as churches grow, access must diminish as the point leader focuses on leading staff and raising up high-capacity leaders.

What senior pastors typically do as their churches face new growth barriers is they try to do both—they try to lead the congregation in growth (by narrowing their focus to finding high-capacity leaders and mentoring staff) and maintain the same relational patterns with long-time members as they had in the early years.

Why do they do this?

They don’t want to make people who have fought alongside the senior pastor in the “war years” feel used, like they are being tossed aside as better and brighter people occupy their time.

They try to keep those relationships with long-term members “trapped in time,” and exactly the way they’ve always been, primarily because things are easier that way. Why cause undue stress and relational turbulence as long as they can “keep certain people thinking” that things haven’t changed between them when, in fact, things changed quite a long time ago?

This, my friends, is the “close to the pastor syndrome.”

Here are a few important reasons why this cannot be ignored.

1. You will never have a relationship with more than 120 people at your church.

I don’t care what denomination you belong to. How extroverted you think you are. What unique philosophy of ministry you bring to the table that demands that the role of “pastor” means helping people in a one-on-one capacity ad infinitum.

[The 6 core responsibilities of a senior pastor.]

You can memorize names, stand at the door and shake hands, and even call everyone in your church on their birthday like a friend of mine does—but none of those things will change the fact that you will never have a real relationship with more than 120 people at your church.

The quicker you accept that fact, the sooner you’ll be able to set into motion what is needed to reach lost people and help them become self-feeding and reproducing disciples of Jesus.

At the end of Jesus’ ministry—after speaking to thousands over three years—there were only 120 people left in a house in Jerusalem trying to figure out what to do next (Acts 1:15).

It is obvious these were the people who actually knew him. His actual friends. People he actually spent time with. Those in whom he actually invested his personal time and energy.

This group was comprised of his twelve apostles, their wives and kids, and a wider band of disciples like Stephen, Phillip and the others who comprised the 72 sent out in Luke 10:1.

Could there have been more? Of course. But after coaching dozens of senior pastors—people intent on expending themselves in the pursuit of kingdom expansion—I’ve noticed an interesting phenomenon.

After a senior pastor’s schedule has been maximized, priorities aligned and energy bolstered, the average senior pastor can juggle no more than 120 actual relationships.

My hunch is that Luke’s recognition that there were only 120 people left in the upper room after Jesus’ crucifixion was not just a trivial fact.

If Jesus could only manage to personally connect with 120 people, why would we expect to be any different?

Take your current attendance and subtract 120 from that number.

Every single attender at Community thinks that in some way they have an actual relationship with Pastor Steve. The reality is, they don’t. They just don’t realize that yet.

Steve, like every person reading this article, is not capable of having actual, personal relationships with 300 people at the same time. There is not enough time, nor does Steve have enough emotional energy (no matter how extroverted he thinks he is) to interact relationally with so many people on an ongoing basis.

The problem at Community is they’ve been flat-lined at 300 for the last five years. Unless things change, they’ll be running 240 or less in another five, so Steve knows he needs to act fast.

2. To grow, you must invest in leaders.

If you haven’t lead your staff and leaders through a study of the first chapter of Robert Coleman’s The Master Plan of Evangelism, they’re in for a paradigm-busting experience. Coleman begins his book by saying,

“It all started by Jesus calling a few men to follow him. This revealed immediately the direction His evangelistic strategy would take. His concern was not with programs to reach the multitudes, but with men whom the multitudes would follow … hence, as the company of followers around Jesus increased, it became necessary by the middle of His second year of ministry to narrow the select company to a more manageable number …

“Why? Why did Jesus deliberately concentrate His life upon comparatively so few people? Had he not come to save the world?…The answer to this question focuses at once the real purpose of His plan for evangelism. Jesus was not trying to impress the crowd, but to usher in a Kingdom. This meant that he needed men who could lead the multitudes.”

And that, my friend, is the primary reason why we must call out and dismantle the close to the “close to the pastor syndrome” in our churches.

Jesus had his inner circle: Peter, James and John. Then the disciples. Then the broader 120, of which people like Mary, Martha, his mother and others were a part.

And that’s it. That’s all he had time for. And he changed the world as a result.

Remember our figurative leader, Pastor Steve? Steve realizes that if he’s going to lead the church forward, he’s going to have to lead like Jesus and invest in what I call “A Leaders” – leaders who can lead leaders. He’s going to have to find and mentor 12 close leaders (his emerging staff and elder board) and a broader group of 100-plus others.

Steve knows the future will come not by adopting some unique model of ministry, but by finding the right people who, in the words of Robert Coleman, “could lead the masses.”

He realizes that utilizing a chaplaincy approach to church leadership (“I’ll just be a hands-on pastor to as many people I can as time allows”) has kept the people who have been members for 10-plus years happy, but few people are coming to Christ. Giving is declining. Momentum is gone.

Steve decides that, given the limited time he has, he’s going to devote a disproportionate amount of that time to seeking, leading to Christ, discipling and releasing high capacity leaders into the church’s ministry who will, in turn, lead the future yet-to-be-converted masses.

When that happens, the 180 people who never had a relationship with Steve in the first place (and a sizeable number of the 120 people with whom he did), start to feel like Steve is inaccessible to them.

The fact that the majority of the 300 church members “thought” they had a relationship with Pastor Steve, but did not, was never a problem, until now.

3. Your pastoral theology is terrible.

Sorry to say it like this, but it’s the truth.

The average small-church board is under the impression that to be a senior pastor who is “doing their job” we need to run around and be an on-call chaplain for every single pastoral care emergency. Do you want to know who’s to blame for this? WE ARE.