Home Features An Unexpected but Biblical Truth About Christian Giving 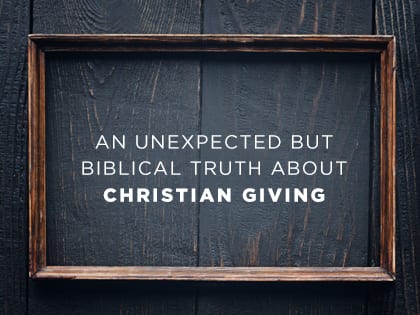 “It’s just like the lost who, upon receiving such a great salvation, tend to overflow with joy and generosity.”

A funny thing happened recently on the way to ministry.

I say “funny,” but perhaps more accurately, it was “totally unexpected.” So, let’s rephrase that:

A totally unexpected thing happened recently on the way to ministry.

What I am going to share is fact, not hypotheticals. I could never have expected, prayed for, believed in or walked in faith for this. In fact, everything in me says that this isn’t the way it should be. But when I actually got quiet with the Lord, I discovered that this totally unexpected thing is totally biblical. It is totally God.

Before I can share what happened, you need some background and context. So here it is.

I came into the ministry late in life after a career in technology. For most of my adult life, I have served the Lord in local churches and ministries in a wide variety of areas, including teens, adults, marrieds, divorce recovery, evangelism, street ministry, men’s, home groups and seniors’ ministry. All of it has been good. To get the full impact of my transition to ministry and how God worked it out, read this.

In 2016, I found myself, along with my wife, Dianna, in an intense, full-time focus on a new ministry startup called Hunters of the Harvest. It is truly a God-ordained endeavor that is dedicated to reaching and restoring dropout believers to the church, the body of Christ. There is no similar, laser-focused ministry like this that I know of elsewhere today. It is a divine biblical strategy for the engagement, restoration and reconnection of dropout believers to the church.

I soon discovered that this disturbing trend is unique to the church in America (indeed, the church in the Western hemisphere) today. Pastors and church leaders in America and beyond are aware of this phenomenon. I discovered that active Christians are also painfully aware of this reality because they all know dropout believers in their own circles of influence—family members, friends, neighbor, and work associates.

Barna Group released a study in 2016 that found that, although 7 of 10 Americans identify with the Christian faith, only 3 of 10 are in church. That means 4 of those 7 are dropout believers—defined as those who have willingly disconnected themselves from any meaningful relationship to the local church. As the Holy Spirit continued to reveal this pressing need to us, we moved forward with this ministry passion with a vision from God, a strategy and plan to execute.

Part of our original strategy included a plan for financial support that we would receive from—who else?—active Christians and churches. Why? Because churches are aware of this issue and struggle with it; and active Christians agonize over family, friends and co-workers who have drifted away from the Lord.

Now, back to the totally unexpected thing that happened on the way to ministry.

I came to this realization by accident as I was discussing the current status of our ministry fundraising efforts with a board member. I shared that churches and active Christians were not being responsive. But dropout believers WERE being responsive! They were, on their own initiative, without knowledge of our financial situation where we are believing God for survival day by day, knocking on our door and giving thousands of dollars. And they are continuing to do so.

I must clarify: At no point have we considered a dropout believer to be a source of support for this ministry. They are the ultimate recipients and focus of God’s love in this ministry. We have never asked or hinted, nor would we ever expect such an outpouring of generosity from dropout believers (some former, some still “along the way to restoration”). We definitely haven’t reached out to these individuals in our partner and fundraising efforts. In fact, I would have considered it a form of manipulation on our part to expect or seek financial support from these individuals.

But God showed me his truth in 2 Corinthians 8, which really changed my understanding on generosity: who has generosity, who should have generosity and who doesn’t have it. Here’s what Paul says:

Now, brethren, we wish to make known to you the grace of God which has been given in the churches of Macedonia, that in a great ordeal of affliction their abundance of joy and their deep poverty overflowed in the wealth of their liberality. For I testify that according to their ability, and beyond their ability, they gave of their own accord, begging us with much urging for the favor of participation in the support of the saints, and this, not as we had expected, but they first gave themselves to the Lord and to us by the will of God.

Yes, it’s just like the lost who, upon receiving such a great salvation, tend to overflow with joy and generosity.

Through all of this, I just can’t help but think that maybe some churches might have a better response to financial needs, not by focusing on their existing congregation, but by actively pursuing dropout believers (as well as the lost) who are “out there.” Those are the ones who can be “forgiven much” now. They are 7 out of every 10 adults today; three are lost and four are dropouts.