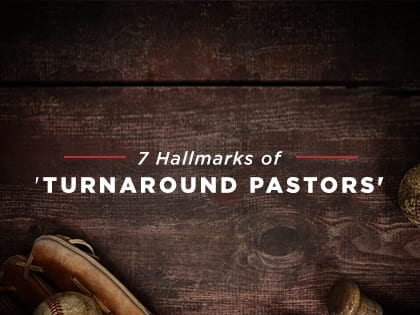 “If the possibility of taking most of the guesswork out of a pastor search intrigues you, read on.”

What would it be worth if you could pinpoint which pastor candidate will succeed in leading that stagnant church through turnaround?

What would it do for your confidence as a member of that pastor-search team if you knew the candidate you’re recommending had what it takes to revitalize your church?

How much easier would your job as a denominational officer be if you could determine which candidate would be able to move that decaying church back from the abyss?

If the possibility of taking most of the guesswork out of a pastor search intrigues you, read on. You will be rewarded for the effort.

“Received wisdom” about a pastor search is a lot of guesswork.

The challenge of and the need for finding pastors who are “hardwired” by God to lead church revitalization is greater than ever.

American culture will continue to drift further and further from any semblance of a biblical worldview. The barriers to effective witness in post-Christian America will continue to mount. As these barriers grow, the need for church revitalization will grow with them. The need for pastors capable of leading stagnant churches to revitalization will become more pressing as time goes on.

But “received wisdom”—which relies on the tried-and-true process of writing a job description, gathering and screening resumes, interviewing the most promising applicants, phoning references and perhaps administering some sort of typing instrument—is unsuited to finding the sorts of pastors that stagnant and dying churches need.

It will become even more unreliable as the situation continues to deteriorate.

There’s a better and more affordable choice now available. It is an option that enables pastor-search teams and denominational officers to pinpoint which pastor candidate comes already furnished with the skills required to lead a church turnaround.

It involves examining a candidate’s usual style of going about his or her daily routines, understanding what he or she expects of and needs from others and the work environment, and how he or she operates under stress.

But before I explain the amazing predictive power of these analytics, let’s revisit the popular book and film Moneyball.

The Genius of Moneyball.

The movie’s central premise (and that of the book on which the film is based) is that the collective wisdom of baseball insiders is subjective and often flawed. Received wisdom in scouting and hiring relies on statistics that don’t capture the actual dynamics of a team playing another team. Stats like stolen bases, RBIs and batting average don’t give a clear view of how a team outperforms its rivals or how an individual player contributes to a winning team.

Baseball scouts and managers face the challenge of trying to predict how human beings will act and what they’re capable of accomplishing under pressure. Faced with the daunting task of building a winning team on a limited budget forced former Oakland A’s General Manager Billy Beane and his assistant, Paul DePodesta, to search for an affordable team that could win championships.

Beane and DePodesta turned to an innovative way of analyzing baseball statistics known as sabermetrics. The statistics proved that two newer metrics—on base percentage (OBP) and slugging percentage (SLG)—are far superior predictors of offensive success. The Oakland A’s discovered that players who excel at these skills are far easier and cheaper to obtain than players with the skills prized by executives who rely on the received wisdom of speed, contact, arm strength, batting average and RBIs.

If you saw the movie, you know the results: They assembled winning teams by signing players who had the skills that produced championships rather than competing for players who excelled in the old but less reliable metrics.

OBP or SLG in Turnaround Pastors

As in building a winning baseball team, so in selecting the right candidate to be the next pastor. The key to eliminating most of the guesswork from the pastor search process is to know what to look for!

Recent research has identified seven significant characteristics that distinguish pastors whom God has hardwired as turnaround leaders from their ministry peers. Chapters 4 and 5 of the book Pastor Unique: Becoming A Turnaround Leader reveal these findings and explains how and why they are significant for turnaround leadership in stagnant churches.

They are significantly more likely to not only share their opinion, but to “assert” their opinion in a group.

A member of a growing church recently reflected on how he saw this characteristic in a new pastor who led the church off the plateau:

I have been a member of my church for 46 years. For the last 17 years our church was in plateau or decline. During that time, we had a pastor that sounds exactly like what you are describing as the general characteristic of a nonturnaround (NTAP) pastor. “John” was a “hands-off,” democratic-style leader. If you asked him what he thought about something, he would just say, “What do you think?”

We have a new pastor now, “Bill,” who has been here a couple of years. Bill seems the exact opposite of John. He is more direct and assertive. He speaks up and gives guidance. Boy, our church is really thriving now under Bill’s leadership. We just had to take the pastor’s office and change it into nursery space!

They are comfortable with shifting priorities, remain flexible and are patient with interruptions.

Quoting once again from Pastor Unique:

(3) They think independently and take initiative, and (4) they expect an environment that encourages independent thought and initiative.

[Turnaround leaders]—who tend to be individualistic—initiate their own course. They want freedom in action and thought. They push against control and traditionalism. These free-spirited mavericks march to the beat of their own drums.

They are, on average, more thoughtful, reflective and cautious decision-makers.

This was a rather surprising finding in the research results. Pastor Unique explains:

Turnaround pastors need to take ample time to evaluate options, weigh opinions and think about consequences. They need to seek the counsel of others and to take time to discuss things with others. Turnaround pastors will spend time staring out the window, pondering the nuances and various shades of gray that constitute any important decision.

They are more keenly attuned to sound.

As you read the following quote from Pastor Unique, bear in mind that “interest” does not mean “talent.”

They are likely to create (or have a hand in creating) musically beautiful worship services. They pay attention to planning the sounds and music and “feel” of the service as much as to the words that will be spoken. The pastor will pay attention to how a sermon sounds. This will influence its delivery. Turnaround pastors may not be better preachers, but they will have greater concern for how they sound. They will pay as much attention to how they say it as they do to what they say.

They are more concerned to see that care is provided, while their ministry colleagues who are not natural turnaround leaders are more interested in providing care.

The significance of this finding becomes apparent upon reflection. This is how we evaluate the issue of providing care:

This is the only item in which natural turnaround leaders scored lower than [their colleagues]. This does not mean that they are uncaring. It simply means that they express that care differently. The familiar shepherd and rancher metaphor neatly explains the difference. The shepherd likes to care for the sheep personally while the rancher makes sure the sheep are cared for. Ranchers are not less caring, they just realize that if they do all the caring themselves, they will be out of harmony with Ephesians 4:11–16, and they will limit the church’s growth.

From Outreach Magazine  How to Expand Your Capacity As a Leader

The predictive power of selecting a turnaround pastor based on these seven distinctive is explained in the epilogue of Pastor Unique.

Greg’s success as a turnaround pastor could easily surprise people if they relied solely on instruments such as the DiSC or the MBTI. His profile in those instruments marks him as unlikely to be an effective TAP. He is different than “all pastors” in significant ways. For example, all pastors tend to be “direct and straightforward” and “friendly and easy to get to know.”

Greg is the exact opposite in both these relational components, and in several others. However, if you had access to his Birkman profile, you would see that he very closely matches the TAP profile in six of the seven distinguishing traits!

Based on that fact alone, you could predict that Greg would be an effective turnaround pastor.

And, in fact, Greg is an effective turnaround pastor.

But he would not “make the cut” in churches or denominational offices that rely on the received wisdom to identify candidates capable of leading a congregation off the plateau. His resume (a Ph.D. in semitics) and his conduct in interviews (shy, hard to get to know) will cause his being eliminated for consideration in most situations.

The process for pinpointing which pastoral candidate has the skills required to lead a church turnaround is simple. Contact us for a free consultation to discuss your needs. If our consulting services will be valuable to you, we administer a questionnaire to the candidate(s) you are considering, analyze the results to “match” the candidates for the requisite turnaround leadership skills, and submit a written report ranking your candidate.

The cost of this service is several orders of magnitude more affordable than the cost of a retained search firm.

Calling a pastor with turnaround skills is essential, but there’s more to winning the game than hiring a slugger. Besides a skilled pastor, a church turnaround also requires a willing congregation. In our practice we have seen turnaround pastors stifled by a church unwilling to make the changes required for revitalization.

To insure a successful placement—one that results in a revitalized church—the church or denominational office must develop a cogent job description and conduct a thorough church assessment. Again, for the sake of emphasis, please note that it is very important that the church’s “willingness” be evaluated. Since naturally gifted turnaround pastors are in short supply, it would be poor stewardship to place them in a church that is set on going nowhere. Place these pastors where they will be free to succeed.

Once the resumes have been received, it’s time to perform those due diligence duties: review resumes, contact references, listen to sermons, and talk with the pastor in a variety of settings to get a sense of “chemistry” or “fit.”

But before pulling the trigger, set aside the received wisdom handed down to us from the insiders of generations past. Evaluate your favored candidate(s) to insure that he or she possess the skills that distinguish effective turnaround leaders from their peers.

If you would like to know more about how we can help pinpoint the right candidate, check out our website.

Bud Brown is the founder and president of Turnaround Pastors, Inc. and the co-author of Pastor Unique. Read the original article here.