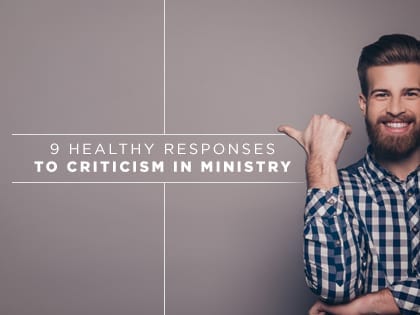 “More often than not, pastors are criticized because they are leaders of the only organization that puts up with bullies.”

The one thing all senior pastors have in common is that we are constant targets for critics.

Sometimes we get criticized for very good reasons. We need to own that. While constructive feedback can often be delivered in misguided ways, too many of us mistake solid leadership feedback as backbiting. Many times it’s legitimate, helpful and constructive advice that we need to hear and appropriate.

More often than not, however, the senior pastors I know are criticized because they are leaders of the only organization in town that puts up with bullies and manipulators.

No other organization, besides maybe dysfunctional school boards, lacks the internal mechanisms and wherewithal to identify, fend off and diffuse destructive personalities quite like the local church.

I believe this happens for a few reasons.

First, many senior pastors have bought into a faulty paradigm that says they need to be personal, hands-on shepherds and don’t need to be strong leaders. Into this leadership vacuum walks critics and polarizing personalities.

Fourth, most churches don’t practice biblical teaching. According to Matt. 18:15-20, there is a conflict resolution process that must be followed, and sometimes that ends with asking people to leave the church.

Years ago our church attracted a woman with an obnoxious personality. She knew her way around a church enough to be a destructive influence without drawing attention to herself.

She had mastered what I call veiled criticism—the ability to criticize and undermine people, while making it seem like it was not the affront it was meant to be.

[These are the five danger signs of church bullies.]

Her main tactic was to routinely use the four most divisive words any church member could utter: “People are saying that …”

Using this exact phrase made it seem like she was merely “reporting” other people’s quips and critiques, when in reality she was really sharing her own.

This saying is often followed by what I call the five accusations, which are the most common accusations leveled against senior pastors regardless of age, location and denomination:

“People are saying that …

Listen, I’ve been in ministry for a quarter century now and have coached more senior pastors than I can count. Whenever—and I mean whenever—a person says that “people are saying that …” it’s always that person’s opinion. Always.

People use that phrase as a way to try to give credence to what they’re saying, in the guise of some unnamed silent majority somewhere.

Social media, with its ability to allow anyone the opportunity to reach a large group of people with only the click of a button, has only exacerbated the problem.

How to Deal With Destructive Conflict

Let me share nine action steps that every senior pastor, church staff and leadership team can put into place to mitigate the presence and impact of these types of personalities.

The longer you keep divisive people around who do not buy into your vision, mission, values or philosophy of ministry, the longer you are delaying the inevitable. These people, over time, turn into rogue, cancerous cells that attract other cells to themselves, expand and stop vital organs from functioning. Don’t shut your back door. Like a colon, it’s there for a very good reason.

I did this for the first seven years in the life of our church plant. People need to know how conflict is dealt with in a biblically functioning community.

3. Commit to growing by conversion growth only.

Doing so will minimize the possibility of attracting Christians who have learned bad habits elsewhere.

4. Withhold membership from people who are fleeing unresolved conflict at their last church.

That is, until they have gone back to their former congregation and remediated the situation, and you’ve received a letter from that church’s leadership that all matters have been dealt with satisfactorily.

From Outreach Magazine  3 Ways to Overcome Failures in Leadership Development

5. Have your leaders read Ministering to Problem People in Your Church by Marshall Shelley.

It’s hands down the best guide on how to handle destructive personalities in the church.

As churches grow larger, the most destructive source of criticism is not from church members, but from staff. Create clear staff values around loyalty and having each other’s back, but also fire quickly. As a senior pastor friend used to say, “I’m not going to pay you to make me miserable.”

7. Teach your leadership to protect one another.

As a senior pastor, you are one of, but not the only, pastoral leader on your governing board. Your governing board is a team of peers, with you as a leader among equals. Like special forces in the military, an elder or leadership team member’s first job is to watch the backs of their fellow team members. Loyalty must be taught and modeled.

8. Stand up to destructive people.

As my dad tells me all the time, “If being a senior pastor were easy, everybody would do it. It’s your job to stand up, deal with problems and take the hits.” Deal with destructive criticism quickly. Be a shepherd and protect the sheep. But remember, you’re one of the sheep, too. Put boundaries in place and stop letting people mistreat you. Give respect, but demand respect, too.

Remember that we come from a long history of godly leaders whose ministry suffered immense criticism. As the apostle Paul said in 1 Cor. 16:9, “A great door for effective work has opened to me, and there are many who oppose me.”