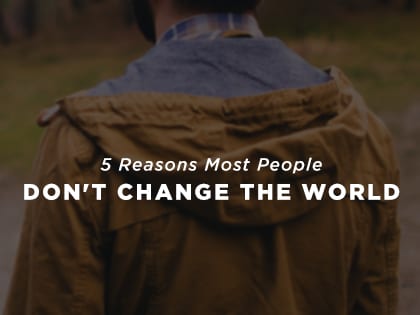 “Changing the world has never been easy, not even for Jesus, who was rejected by his own people and nailed to a cross.”

I’m writing this from an apartment in Hyderabad, a rather large city in southeast India. In the room next to me, my wife, Tiffani, is playing with our Indian daughter, Jannie Rose. She’s 22 months old. She’s smart and beautiful, full of joy and surprisingly assertive. We picked Jannie Rose up from her orphanage two weeks ago, nearly four years after we started the adoption journey.

And that’s what I want to discuss with you: the four years between saying “yes” to God and seeing our daughter for the first time. I’m not trying to convince you to adopt, although I hope what I’m about to say plants a seed in someone. I want to talk about changing the world, influencing the kingdom, doing hard things—whatever phrase you use to live for something larger than yourself.

After traveling down the adoption road for four years, I know why most people never change the world.

It’s agonizingly hard. If you’re on the road, you know. It’s uphill no matter which way you go. Every force is against you, it seems. It’s often lonely and scary, and just when you’ve given all you have, you realize the journey’s not over. If you’ve ever quit your day job, started a nonprofit, moved overseas to become a missionary, followed your passion, stood against injustice or adopted, among other things, you probably understand this struggle.

I want to encourage those who are on the journey toward making a difference. I also want to challenge those who aren’t on the road. Changing the world involves a few universal truths, I believe. Here they are.

The Enemy wants you to believe you need special skills, talents, theological training or resources to be used by God. This is untrue. God doesn’t need your gifts and talents. He doesn’t need your money, thank you. He has all the necessary tools for the job and an infinite bank account.

God doesn’t work through talented people. He works through willing people. What he needs is a willing heart. This is no small point.

Why do orphans still exist? Why is there systemic injustice? Why do people die from lack of water and food? Is it because God’s not good? If you want to believe that, go right ahead. But here’s what I believe: There aren’t enough people with willing hearts.

I believe this because, whether in Scripture or real life, any time I see someone who’s willing to risk his or her comfort and trust God when the future seems uncertain (or impossible), God uses that person. I rarely, however, see God forcing his way into an unwilling heart.

If you need to overanalyze or make sense of the future, or if you prefer to settle in mediocrity and never listen to the small voice inside calling you to something greater, God won’t force his will upon you. He’ll just move on until your heart is willing.

Don’t ask me why God operates this way. I really don’t know. I do know much of the darkness and injustice in our world could be eradicated if everyone opened their hearts to God.

2. Changing the world will ultimately change you.

When Tiffani and I started the adoption journey, I suffered from Superman Syndrome, minus all the cool Superman stuff like flying and using my eyes as laser beams. I was the big, bad white American tasked with flying into a third-world nation and saving someone from an otherwise hopeless existence.

I laugh thinking about those early days. That’s all I can do because I stumbled into Jannie Rose’s orphanage, spiritually at least. I threw away the cape long before I arrived.

If you decide to change the world and God is involved, you will be the first one asked to change.

Why? You and I are far more selfish and ego driven than we even realize. And if we finish the journey without fully acknowledging God was responsible for every step along the way, we miss the point. The point being you’re not in control, God is infinitely good and merciful, and influencing the kingdom is ultimately about God.

Yes, when Jannie Rose left the orphanage, her chances of thriving and maturing increased. But not because Frank Powell is awesome. In fact, I need saving as much as she does, mostly I need saving from my tendency toward self-centeredness and a desire for success.

3. You can’t change the world without a community.

While I generally stay away from absolutes, I feel confident using one here. You will never, ever, ever do anything for God without a strong community of people around you.

You will never do anything for God without a community.

I’m in India, holding my beautiful daughter, because of the support of hundreds, maybe thousands of people. Time and time again, Tiffani and I received random sums of money from people we barely knew. We received phone calls and texts from dozens more reminding us we were being prayed for. Hundreds more supported our many different fundraisers. Our friends, family and local church cried with us and celebrated with us, as well.

You see, whatever you “accomplish” (I don’t like that word … if you have a better one, please insert it), you accomplish on the backs of a lot of other people.

There’s no such thing as a solo performance in God’s show. As long as you try to accomplish things on your own, you will fail. And in America, where even churches are growing increasingly separated and individualistic, this point is important. The more we separate and divide, the less impact we have on the world.

4. You can’t change the world with good intentions alone.

Good intentions never wrote your book, adopted your child, or started a nonprofit. You already know that, but we need a reminder. I do, at least.

Good intentions pave the road to a hard heart, one that settles for status quo and never steps outside of the comfort zone. When you say “no” to the voice inside of you (the voice of the Spirit, I believe) and quickly give him every reason why you can’t or shouldn’t say “yes” right now, the voice eventually becomes so soft you barely hear him.

Sometimes you should say “no.” But sometimes fear and a desire for certainty make the decision, not wisdom and close communion with God.

5. Changing the world will take you to the end of yourself.

Even Jesus encountered fierce resistance as he changed the world. It’s not easy. But God is more powerful than resistance. Keep the faith. Don’t give up. Trust God. And you will make a difference.

If you try to make a difference in the world, you will encounter fierce resistance, and the resistance will only rev up the closer you get to the finish line. Along the way, this resistance assumes different forms. For some, it looks like fear. For others, it looks like shame. Regardless of its form, resistance has one goal: to pull you off the road and make you think a mediocre life is OK as long as you’re a good, moral person.

I can’t tell you how many times I wanted to throw in the towel. So many nights I wanted to give up. Along the way, it seemed as though no one cared whether our adoption worked out or not.

This will be true for you, as well. People do care, in fact. But resistance wants you to believe you’re in this alone, that no really cares, so why should you? And it tells you a version of this lie: “This is supposed to be easy. I didn’t sign up for all this struggle.”

Changing the world has never been easy, not even for Jesus, the Son of God, who was rejected by his own people and nailed to a cross.

But the good news from the cross is that evil has no power over you, and if you persevere, you can make a difference. You can influence the kingdom and shape the eternal trajectory of others. Yes, it will cost you. But you were created for this, to live for someone larger than yourself.

And if you say no to God, you will reach the end of your days full of regret. Just trust me on this. Changing the world will never be easy, but you have what it takes.