Home Features Church, It’s Time to Wake up to the Plight of the ‘Other’ 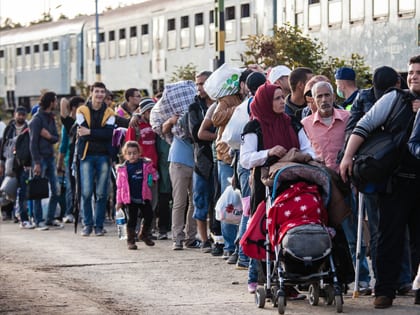 This article is a follow-up to a previous article by Ed Stetzer, “Fellow Christians, It’s Time to Speak up for Refugees.”

In the wake of the Trump administration’s focus on refugees, I would be using an “alternative fact” if I said my heart wasn’t feeling a bit heavier today than it was just a few days ago.

President Trump’s executive order, which puts a 120-day moratorium on the Refugee Admissions Program and an indefinite ban on refugees from Syria and several other countries, is, at best, misguided in its understanding of fact and our reality as one global community and, at worst, a policy that will deeply change not only the way the world views the United States, but also how Americans view the world.

There is no more critical time than now for God’s people to instead turn towards the helpless, the homeless, the broken, with open arms and hearts, ready to pour out every ounce of love we can muster.

And as I wrote in an article in The Washington Post:

I certainly understand the struggle with fear in our current climate, but I imagine that there are many people on the other side of the world who have experienced fear like you or I have not seen. And they have just been told they have nowhere to turn.

As evangelicals, we have hopefully read enough of our Bibles to understand the crystal-clear calling of our God, who (1) created all men and women in his image; (2) gave his life for all who would believe; (3) does not show favoritism (Acts 10:34); and (4) embraces diversity and the beauty of family in a way that often surpasses our own understanding.

Revelation 7:9 is often a rallying cry for living out the truth that we are one body in Christ: “After this I looked, and there before me was a great multitude that no one could count, from every nation, tribe, people, and language, standing before the throne and before the Lamb.”

That’s where all believers are headed—gathered around the throne, and from all races and languages.

From Outreach Magazine  7 Things to Consider Before Reopening Your Church

What grieves my heart is the misinformation on refugees that has been widely disseminated, from President Trump and from many of his evangelical supporters. Such false facts and angry reactions do not align with God’s heart for this world.

On our own Statute of Liberty is a brilliantly penned poem by poet Emma Lazarus:

Not like the brazen giant of Greek fame,
With conquering limbs astride from land to land;
Here at our sea-washed, sunset gates shall stand
A mighty woman with a torch, whose flame
Is the imprisoned lightning, and her name
Mother of Exiles. From her beacon-hand
Glows world-wide welcome; her mild eyes command
The air-bridged harbor that twin cities frame.
“Keep, ancient lands, your storied pomp!” cries she
With silent lips. “Give me your tired, your poor,
Your huddled masses yearning to breathe free,
The wretched refuse of your teeming shore.
Send these, the homeless, tempest-tost to me,
I lift my lamp beside the golden door!”

As Americans, even more so as evangelicals, we need to let these words soak in. For in them we find the heart of the God we claim to follow and to love.

Someone said this to me after reading my article in The Washington Post:

As someone who appreciates history, I would conjecture that many Americans who do not even know much about their great-grandparents, much less their ancestors who were the first-generation immigrants, have thereby lost a sense of empathy, or even sympathy. Historical amnesia may, however, help those of us who want to reject the immigrant.

We can look back at our country’s history and see a trail of embrace (though not without many scars and wrong choices interspersed). Similarly, we can look at the history of Christianity and see a story woven in embrace—of the sinner. Of the refugee. Of the broken. Of the lowly.

Christianity, at its core, is about other-ness. The meek. The lame. The weary. It is doing as God did with us—picking up our global family. It is turning from fear and running toward any and all who have fallen off the fringes of the world.

I cannot say for sure what Rahab was thinking as the spies entered Jericho, but what I can be sure of is that she did not let her fear of “the other” stop her from helping them (Joshua 2). Similarly, when the Samaritan encountered the man on the road to Jericho, he did not let indifference or fear hinder him from helping (Luke 10). Again, when Paul and Silas were in jail, they did not let their fear of the prisoners or the guards overcome them; instead, they reached out in love (Acts 16:23-34).

Church, it’s time we wake up.

It’s time to leave our excuses behind and follow Christ.

It’s time we forgive ours and others’ past decisions and choose to walk, hand in hand, into the new reality of the world.

Trump’s latest ban may signal one thing to the world. But our counter, as Christians, is to instead break down any and all barriers that separate us from others and to instead love people of all backgrounds into the body of Christ.

May we preach pro-life from conception to death, and every moment in between: pro-people—pro-refugee, pro-homeless, pro-exile.

Just as Jesus was and is, we must be for people—even and especially those who are dirty, sinful and lost—embracing them into the kingdom of God.

Because, let us never forget, we once were dirty, sinful and lost.

Read more about the refugee crisis and the church’s response »