Home Features The Difference Between Church Members and Chicken 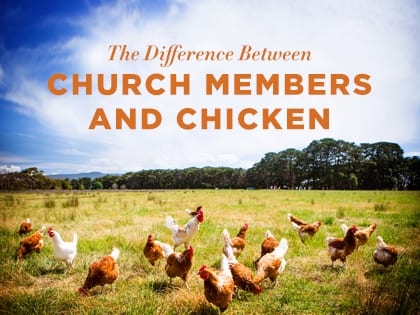 “I’m learning that systems are good … for preparing chicken. But systems have to include freedom when dealing with people.”

The best fast-food restaurant is … that’s right, Chick-fil-A. (If you disagree, it’s been too long since you’ve had some sweet tea.)

I was talking to a Chick-fil-A location operator recently and he was bragging about how another store was coming in to tour their kitchen. He explained that the kitchen has to be so tight on its systems because food must be prepared at a certain temperature and stored at a certain temperature for a certain a mount of time, then cooked a certain way. In the food business, if the food isn’t prepared right, people don’t come back!

It made me think of all the systems we have to implement to lead a church effectively. Discipleship, worship, guest experiences, kids ministry, assimilation—they all require good systems so that people can get where they want to go easily. (Personally, I have found The E-Myth Revisited to be the best tool to explain how systems work in a growing organization.)

The problem is, you can take a system too far. Here’s what I mean.

One of the systems God had put in place for his people 3,500 years ago was, “Remember the Sabbath day and keep it holy.” There were explanations given, but the bottom line was don’t work on the Sabbath.

In an effort to obey the Sabbath commandment, the Pharisees of Jesus’ day had an extensive list of what violated the command. One commentator pointed out:

Jesus has seven different conflicts with the Jewish leaders about the Sabbath, and in one in particular he points out to them: “The Sabbath was made to meet the needs of people, and not people to meet the requirements of the Sabbath” (Mark 2.27).

They had gotten it backwards. Their Sabbath system wasn’t a path to the life God wanted for them; it had become an end in itself.

A lesson we’re learning right now in leading our church is that sometimes we have made the “system” something that is not just a path to the life God wants for our people; sometimes, our systems become ends in themselves.

For example, an usher at our church recently seated a guest in a section that was supposed to be closed. Then, their volunteer leader said, “That makes it harder for us to serve communion.” When I heard that I wondered, when did how we treat guests depend on what was easiest for us instead of what was best for the guest? I realized I had led our team in way that communicates the system is what is most important.

But I think you could rephrase Jesus’ statement in our case to say: “The SYSTEM was made to meet the needs of people, and not people to meet the requirements of the SYSTEM.”

Another Chick-fil-A story drove this home for me. An operator told me that his staff members at the cash registers have permission to comp a guest’s meal at any time, for any reason. If a guest is upset, if guests are at the restaurant to celebrate, if anything happens where for any reason the employee thinks it will make a better experience to give away a meal or menu item for free, he or she can do just that.

From Outreach Magazine  Bill Hybels: 5 Ways to Embed Evangelism Into Your Culture

I’m learning that systems are good … for preparing chicken. But systems have to include freedom when dealing with people. People are not chicken! While systems are necessary to accomplish the goals of ministry, I must be careful as a leader to ensure that systems are a means to an end, but people remain the end goal.

Carl Kuhl is the lead pastor at Mosaic Christian Church in Elkridge, Maryland. This article is part of our From the Front Lines series, in which several church planters share what they’re learning as they lead their congregations.