Home Features 5 Keys to Reviving the Gospel in America 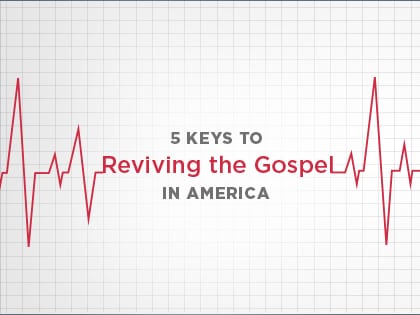 Rich Stearns: “It’s time for the gospel to go viral. And that means every one of us needs to become contagious.”

Especially during flu season, no one wants to think much about a virus, except how to prevent it.

But I’d like to challenge you to think about a virus in positive terms: as a metaphor for the gospel. After all, the good news of God’s love is so compelling that it should spread from person to person like wildfire. So why haven’t we seen it “go viral” in our culture?

My Cornell University degree in neurobiology didn’t put me on the career path I expected, but it has helped me understand a few things about the human body. Here’s a quick primer on how a virus works: When a full-strength virus enters our body, it multiplies within our cells and overwhelms our immune system. We become contagious to others, and the virus spreads. But scientists have learned to control these outbreaks through vaccines—a dead or weakened strain injected into the body, which causes us to develop an immunity to the virus.

Back to the metaphor … is it possible that we have exposed America to such a weak and anemic form of Christianity that instead of infecting our culture we have vaccinated it against the real and authentic Christian faith?

If we’re honest with ourselves, we know that Christianity is in crisis in America. The contentious presidential election certainly didn’t help. If you scan the news, it’s pretty clear what Christians stand against—but we haven’t really demonstrated what we stand for. Instead of shining our light within our culture, we often shake our fists at the culture.

Let me try to describe the original, contagious form of this gospel virus we call Christianity. Just before Jesus left 2,000 years ago, he gave a spectacular assignment to his followers: He called us to go to the far corners of the world with the good news of the gospel, to make disciples of all nations, and to build and establish on earth the kingdom of God.

The spread of God’s kingdom was meant to be nothing less than a social and spiritual revolution to restore, repair, rebuild and redeem every dimension of human life. It was a call to show the world a different way to live as forgiven people reconciled to God.

Christians would go to the cold places, the broken places, the ragged edges of our world. We would become a healing balm on our societies’ open sores: poverty, disease, hunger, injustice and exploitation. We would take up the cause of the poor, the immigrant and the stranger; come alongside those who struggle; fight on behalf of the mistreated; and bring real hope to the hopeless. The church of Jesus Christ would be a beacon of light in a dark world, attractive to all. And God’s love would spread like a virus.

That was the breathtaking assignment Jesus gave his church. But 2,000 years later, this urgent mission remains unfinished. Christians today seem to have lost that original fire to change the world.

I believe we can regain that original vision of the kingdom of God in our churches. What it would take? In keeping with the virus metaphor, here’s a treatment plan of sorts:

The good news of the gospel begins when we accept the forgiveness offered only by Jesus Christ—but from there it moves on to a lifetime of action. The Great Commission is a sprawling vision of a new kind of human flourishing that would take the world by storm. It was God’s invitation for all to come in and live differently. This big gospel is an attractive gospel.

In “The Sheep and the Goats” parable, Jesus tells us in no uncertain terms that those whose lives are characterized by acts of love done to “the least of these” will be welcomed into his Father’s kingdom. It means that any genuine commitment to Christ will be accompanied by demonstrable evidence of a transformed life—not works instead of faith, but works as the fruit of faith. Because when we tangibly care for those in need, we actually are caring for Christ himself.

3. Move from apathy to outrage.

Living out Matthew 25 has a way of rearranging our priorities. Previously, we might not have cared that hundreds of millions of children go to bed hungry every night; now we see Christ in each of those children—as Mother Teresa says, “Jesus in a distressing disguise.” And we don’t just care, but get angry. Seeing the world the way God sees it, loving as he loves, we’ll snap out of passive apathy and become outraged about the right things.

Jesus’ great vision for his followers was not that we would gather in our churches every Sunday, looking at PowerPoint slides and clapping our hands to the latest worship songs. And his plan for us was not to become successful people embracing the American Dream. The one great purpose of our lives is to serve Christ and build his kingdom, and everything else in our lives should simply be a means to that end. It’s not our careers, money and talent that give meaning to our lives—it’s God’s purpose that gives meaning to everything else.

5. Get out of the “Christian ghetto.”

We have got to get into the messiness of the world if we’re going to change it. We need to move beyond our comfort zones and mix it up with the very people who don’t share our faith. World Vision is often criticized for working with non-Christian partners, but in the hard places, that’s often what it takes to care for “the least of these.” After all, we serve a God who dined with sinners, reached out and touched lepers, forgave the woman caught in adultery, and let a prostitute rub perfume on his feet.

If all the churches in America did these things, do you think our culture would take notice? Wouldn’t people wonder what motivates us to be so compassionate and inspiring—and come to church to find out more?

It’s time for the gospel to go viral. And that means every one of us needs to become contagious.