Home Features Hope for Nov. 9: Pastors on the Election 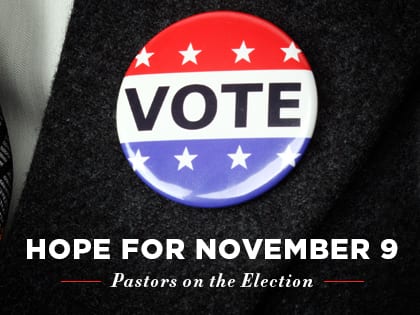 Several pastors answer the question, “What is the message of hope you want to give to America in the aftermath of this election?”

As the Outreach editorial team reflected on how we should cover Tuesday’s election, we decided that rather than digging in to politics or a discussion on the candidates, we wanted to put together something that would transcend the noise of the election season—with a message that is redemptive and hopeful.

So we reached out to several pastors and church leaders around the country and asked them the question, “What is the message of hope you want to give America in the aftermath of this election?” Here is what they responded.

We are really ready for this presidential election to be over. We’re ready for an end to the rancor and tackiness. Voters on both sides feel frustrated, even embarrassed by it all. There is a visceral fear, an angst about the result. What if so and so wins? When we wake up to Nov. 9, post-election, when the confetti is swept away and the election is finally over, what will we see?

I have a prediction. I know exactly what Nov. 9 will bring: another day of God’s perfect sovereignty. He will still be in charge. His throne will still be occupied. He will still manage the affairs of the world. Never before has his providence depended on a king, president or ruler. And it won’t on Nov. 9, 2016. “The LORD can control a king’s mind as he controls a river; he can direct it as he pleases” (Prov. 21:1).

Understanding God’s sovereignty over the nations opens the door to peace. When we realize that God influences the hearts of all rulers, we can then choose to pray for them rather than fret about them. Rather than wring our hands, we bend our knees and we select prayer over despair.

‘A Model of Love for a Divided Nation to See.’

Here’s a question evangelicals must wrestle with: Why do 63 percent of white evangelicals vote Republican and 62 percent of black and Latino evangelicals vote Democrat? One of the reasons is because we have intentionally built homogeneous local churches built around preferences instead of the robust gospel Paul preached.

My prayer is for pastors, for the sake of the gospel and the glory of Christ, to intentionally build multiethnic, socioeconomic diverse churches as a model of love for divided nation to see.

People often ask me to teach through the book of Revelation. In reality, they don’t want to study Revelation. They just want to know who the antichrist is and when Jesus will return.

When I tell them, “I’m on the welcoming committee, not the programing committee,” they’re disappointed. Yet strangely, whenever the political, cultural or economic landscape sours, these same folks ignore the one thing we know for sure from the book of Revelation: In the end, we win!

It’s certain, guaranteed, a done deal. And if victory is certain, who cares what the score is in the third quarter? Don’t panic. The game isn’t over yet. We win!

‘We Can Be Faithful in This Chapter.’

First, our love for our country has not changed. Paul charges Christians to pray (1 Tim 2:1–4) for the peace, freedom, and prosperity of the city. This implies we need to work for those things as well. When Paul wrote those words, Christians were a small, hated minority, working for this peace and prosperity within hostile government structures. Although they had no budget, no political power and no buildings, they turned the world upside-down.

Second, we now have a chance to show unity in the church that transcends racial and political lines. The world longs for this, but can’t accomplish it. Disunity happens not because we care about politics too much, but about Jesus and his church too little.

Third, we are primarily citizens of a different kingdom, and this election cycle has reminded many of us of that. If we are more distressed by who won the election than we are over the eternal destiny of our neighbors, we are probably citizens of the wrong kingdom. America is a “drop in the bucket.” God superimposes his purpose to complete the Great Commission over all of history. We may be distressed by the outcome of the election, but we can be faithful in this chapter. The hope of the world, whether in the 1st century or the 21st, is not found in our political decisions, but in the power of Christ through his people.

‘No Matter What, You Will Be Disappointed.’

I have no idea who will win the election. But I know this: no matter who you vote for, you will be disappointed.

So, yes, we need to vote. Vote wisely and prayerfully. But don’t put your hope there. Put your hope in Jesus. You’ll never be disappointed that way.

‘This Election Has Not Diminished My Hope.’

Neither this election nor any election, neither Trump nor Clinton, has encouraged my hope or diminished my hope in the king and his kingdom. I will go to bed the night of the election and I will wake up the day after the election with the same hope: that Jesus was crucified, was buried, was raised and ascended to the right side of the Father, from where he rules all creation. My hope is in him and in his rule, not in any human government or ruler.

‘The Rest Will Work Out in the End.’

In the words of Chance the Rapper, “Don’t believe in the king, believe in the kingdom.” As the people of Jesus, our hope isn’t in a political candidate or party or even in a form of government called democracy. We care about those things because we care about human flourishing, but our hope is in Jesus and the kingdom. So whatever the next four years hold, may we “seek first his kingdom and his righteousness,” knowing the rest—no matter how hard—will work out in the end.

“If you are disappointed with the elephant and the donkey this year, try the Lamb.” When I saw this posted on a small church sign, I inhaled the truth of the statement and exhaled my worry. We must remember that the kingdom of heaven will not be ushered in on Air Force One, but with King Jesus on a white horse wearing a white robe, dipped in blood. In the meantime, God is still in control. Do not put your hope in political figures of any party, but look up and pray like heaven.

In the beginning was chaos, but yet the Spirit, hovering just centimeters above the surface, awaited the Father’s command. Creation yielded. He who is on the throne still designs terrifying ways to draw his creation homeward, and he who walks confidently on turbulent waters once again bids us … come. And maybe, just maybe, God is designing all this for a far greater purpose. He loves us that much.

‘Our Final Hope Resides Not in a System.’

“Faith and politics” doesn’t simply mean voting our values, it also means after voting we remember that God is still sovereign, our path is to walk by faith despite political results, and our final hope resides not in a system, a party or the health of our country, but in God himself.

‘The Tipping Point Is Here.’

Chaos and uncertainty are harbingers of shifts, and even new movements or generational awakenings. I’m hopeful that this is a moment that those that have gone before us have prayed about. It’s a time not to react simply in anger or cynicism, but as a clarion call to create new stories, language, songs, poems, technologies, processes, forms and systems of change for generations to come. Our lives don’t pivot around any one human but around the ONE who is the ultimate ruler of our lives. In him we rest and move.

For there to be healing, we need to engage and repent of the raw reality of the state of the Christian community. The political process has been a long, painful look in the mirror at the state of Christianity in America. Yet, I’m hopeful with the rising tide of passionate millennials who are third culture, artfully adaptive, fighters for justice, lovers of life, global-minded, seekers of the transcendent, living simply, caring for the marginalized and now becoming the majority in our cities, we have hope for a new day in America where the marginalized will lead the masses. The tipping point is here.

‘Set Your Future on a God Who Has Proven Trustworthy.’

The keyword emerging from the tag cloud of any believer’s life this season should be hope—but not the cultural understanding. We use hope like we use the word wish: “I sure hope I get an Xbox for Christmas!” No, the biblical usage of hope is much different: a term of certainty, confidence, belief. 1 Timothy 4:10 says, “We have our hope set on the living God.” Hope means to set your future on a God who has proven trustworthy, who is an undeniable refuge and who is not a possibility, but a certainty. His faithfulness is expected certainty no matter what’s transpiring in the world.