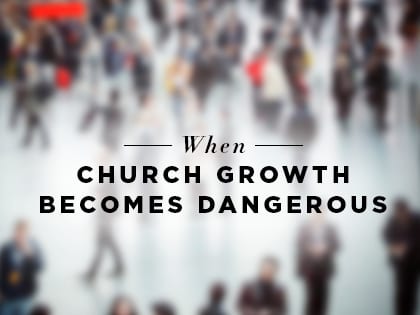 “Let church growth be the real thing, not something hyped up. Solid growth, not inflated numbers.”

“Over ____ percent of churches in America have plateaued.” (The percentage depends on who’s talking.)

But let the growth be the real thing, not something hyped up. Solid growth, not inflated numbers.

A generation or two ago, pastors in our denomination took it for granted that if they wanted to—ahem—“move up” to a larger church, they needed to show numerical growth where they were presently serving.

Before long, some less-than-trustworthy preachers decided to play that game to the hilt and ruined it for everyone. They grew creative in their counting, they schemed and plotted and even lied about numbers, and they doctored the records to make it appear like they were experiencing greater growth than they actually were.

They had special days with celebrities, entertainment and free giveaways. They bused people in from far and near to balloon their statistics. They did anything they could to inflate the numbers.

Soon, even pastors who had their hearts right (and heads on straight!) became swept up in the movement. If college professors were sentenced to “publish or perish,” pastors in our denomination were expected to produce big numbers or remain at Podunk forever.

Eventually, churches in search of pastors caught on to what was happening. They began to see that big numbers did not guarantee a pastor was growing his church or could even preach. The only thing big numbers did guarantee was that the preacher was a promoter.

A lot of churches ended up with promoters in the pulpit and gimmicks in place of ministries. They had been conned and paid dearly for their mistake.

From Outreach Magazine  One Common Factor in Declining Churches

Gradually, search committees quit expecting pastoral candidates to grow a church and started looking for other indicators, what they would have called “more reliable ways to gauge a ministry.”

In the early 1980s, a large church in Texas was considering inviting me to become their new pastor. They liked everything they saw, they said, with one exception: I had not baptized very many people the year before. Something like 38, as I recall. Our usual numbers were in the 70s and 80s. That committee required larger numbers, even though they didn’t put it in so many words. They would have simply said, “We want an evangelistic pastor.”

I did not excuse our low numbers, and didn’t make up alibis, even though they kept inviting me to do so. “Surely there was a reason for the low baptisms last year?” I said, “None that I can think of. I did the same thing I always do, and we just had an off year.”

But, rather than take a chance, they moved on—which was fine, by the way, because I had no inkling the Lord was leading me to that church anyway.

Such churches may have had good intentions, but they often fell into a trap. They sometimes hired pastors with big numbers only to later discover those numbers had been inflated. But now they were stuck with the pastor.

More and more, if the bills are paid and the attendance is holding its own, everyone is happy.

From Outreach Magazine  What Christians Need to Know About Mental Illness

I’m all in favor of churches supporting their pastors and the deacons not pressuring the pastor to adopt their agenda. What I’m longing for—calling for, actually—is for pastors to experience that inner drive to reach more people for Jesus and to grow their congregation in ways that matter.

I am not calling for a return to inflated numbers and artificial growth.

Twenty-five years ago, a church caught up in the numbers thing wrote to say my name had been given to them as a potential pastor. “If you are interested in being considered,” the letter said, “please fill out the enclosed application and return it to us.”

Among the questions on the application—a term which I find offensive, by the way—was this: “List the revivals which you have preached in the last 10 years, and give the number of conversions in each one.”

I wrote in the blank: “I do not keep such records. And if I were you, I would think twice about any preacher who does.”

Apparently, they found such a one and called him. If anything ever happened in that church during his administration, I never heard. I suspect they got what they were asking for: a pastor adept at the numbers game, who didn’t mind manipulating the church and everyone around him to pull it off.

This is a huge subject and one burdensome to a lot of God’s people. I’ll end this with this word from the Word: “Grow in the grace and knowledge of our Lord and Savior Jesus Christ” (2 Peter 3:18).