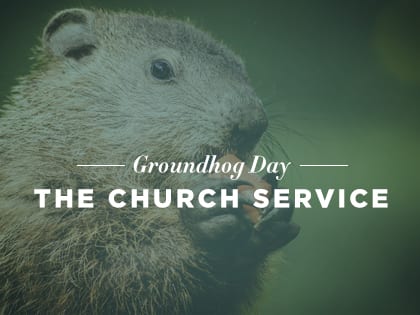 In the movie, Phil Connors gets stuck in a repetitive time loop. Is that how your congregation feels on Sundays?

In the comedy movie Groundhog Day, TV weatherman Phil Connors is assigned to cover the yearly Groundhog Festival in Punxsutawney, Pennsylvania. After he arrives, however, he gets stuck in a time loop in which he awakens every morning on the same date, February 2. At first, he uses the situation to his advantage, but then he comes to the realization that he is doomed to repeat the same day (Groundhog Day) in the same place, seeing the same people doing the same things every day.

This makes for an entertaining and humorous movie—but a terrible church service.

Let me explain. We understand everything should be done in a fitting and orderly way (1 Corinthians 14:39). However, in like manner, everything must be done so that the church may be built up (1 Corinthians 14:26). It is good to have order, but the order does not have to be repetitiously mundane.

So here are five characteristics of a Groundhog’s Day church service. See if you recognize any of them as being true of your church.

1. The order of the service never changes unless it’s a holiday or there is a power outage.

Related: 3 ways we miss the mark in church worship »

4. Then there’s the offering: Say a little “we’re broke” prayer and pass a plate while Sister Off-Key sings. If she didn’t sing, the offerings would probably increase. We all stand and in unison, we unthinkingly chant, “Praise God from whom all blessings flow; praise him all creatures here below …”

5. Then comes the insurance salesman, Ned Ryerson, the preacher. He uses the same lines, the same verbiage, the same stories, the same pet doctrines (which often, ironically, are of man and not of Scripture). He recycles the same pitch, which he calls sermons. He does not have to be prepared because he repeats the same things Sunday after Sunday.

OK, maybe this is a tad exaggerated. But the truth remains: If we keep doing the same things, we will keep getting the same results. Many of us fail to ask the question, “How is this working for us?”

In the movie, the repeated drudgery of Groundhog Day ends when Phil stops focusing on himself and begins focusing on others. Love is the key that awakens him from his vain repetition. Before the day changed, Phil had to change.

The sign of a new day, a new Lord’s Day, is a service filled with enthusiasm (from enthous; “possessed by a god, inspired”). Six things to consider:

Change it to, “If it ain’t broken, maybe it ought to be.” Just because something “works” does not mean that it’s the most effective thing you can do. Is there a way to communicate the Way?

2. Mix it up—not just once, but regularly.

Surprise your congregation. Brother I-Shall-Not-Be-Moved won’t like it. However, there has to come a time when we stop attempting to reach the reached. Learn a lesson from Elsa in Frozen: “Let it go.”

From Outreach Magazine  The Pursuit of True Reconciliation

4. Change the look of your sanctuary.

Turn it into a sanctified auditorium. Do this and you may turn the people into sanctuaries (1 Corinthians 6:19).

5. Make the offering an intricate part of the worship experience.

“Give your attention to prayer and the ministry of the Word.” Answer questions people are asking, be relevant and above all, be biblical. “Preach the Word; be prepared … correct, rebuke and encourage—with great patience and careful instruction … keep your head in all situations, endure hardship, do the work of an evangelist, discharge all the duties of your ministry” (2 Timothy 4:2-5).

After being forced to spend the same repeated Groundhog Day in a cold, mundane town, Phil Connors has a change of heart. His closing line in the movie: “It’s so beautiful—let’s live here.” May that be true of your church service.